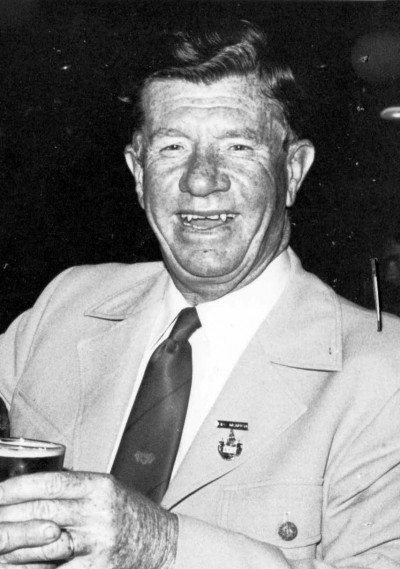 There are many people in the community who contribute so much but go unrecognized.

The same can be said for football and earlier this year one such man, John Leber, passed away without so much as a whimper from the football community in NSW.  Why?  Simply because no-one was aware of the part he played in football and those who did have themselves left this earth or have long parted ways with the game.

John was raised in Alexandria, Sydney.  As a schoolboy he represented the state then joined the Newtown club where he played senior football.  In 1943 he joined the army aged 21 and before a posting to the islands with the 2/23 Battalion,  had a couple of games with Fitzroy seconds whilst in Melbourne under temporary assignment.

Following the war John rejoined Newtown but then turned his focus to umpiring. where he was recognized as a leading light.  He officiated in approximately 400 fixtures, 147 with the NSW Aust Football League where he was appointed to two senior grand finals in 1951 and again in 1955.  Most of his games though were school and junior fixtures.  He was very focused on youth football.

John also umpired the interstate fixture between NSW and Tasmania at Trumper Park in 1955 where his performance was rated as outstanding and received a letter of appreciation from the Tasmanian Football League.

In 1953 however, he was severely attacked by a spectator whilst umpiring a match on Trumper Park.  This resulted in him having to leave the field, but it did not steer him away from the game.

Later John involved himself in junior football at both a club and representative level and in fact coached the NSW Under 15 team in the early 1960s.

John and his wife Josephine moved to Engadine in Sydney in the mid 1950s and it was there he also involved himself in the burgeoning youth reform centre at Boys’ Town, also at Engadine.

While the establishment was conducted by the Catholic church, John saw an opportunity to further develop the character of some of the young boys by introducing them to Australian football.  So a club at Boys’ Town was formed which competed in the St George Junior Football Association.  This club went on to produce many outstanding players and for one year in 1971, spawned an open age team, called Salasians, which competed in the then new Sydney Districts Assn.

John gave away his active involvement in football in 1972 after 33 years of continuous association with the game. For his efforts with junior football John was awarded life membership of the NSW Junior Football Union and for his contribution to umpiring he was made a life member of the NSW Umpires Association.

John worked for many years with the national airline, TAA at Mascot and was always called upon to provide more than better rates for travelling NSW interstate teams when the league changed from train to air travel in the early 1960s.  Clubs, like Western Suburbs also used his services on their annual post season trips.

He retired to Coffs Harbour many years ago and eventually was housed in an assisted living facility where continued to live until his death.

So here is another who gave a lifetime to football but now is remembered by few.

2 thoughts on “WE MISSED HIM”