“I was down the Riverina, knockin’ ’round the towns a bit,
And occasionally resting with a schooner in me mitt,
Up at Tumba-bloody-rumba shootin’ kanga-bloody-roos.”
(John O’Grady) 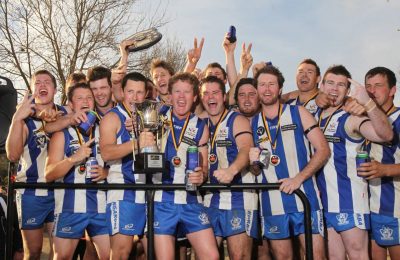 When the Tumbarumba footy club was formed for the 1971 season the local bakery would not sell pies to the club to sell in the canteen at the club’s home-ground such was the antipathy from rugby league supporters to the town’s new club.

There was open hostility to the arrival of the Australian game in Tumbarumba that in addition to boycotts, included letters to the editor in the local paper stating that the code would corrupt the youth of Tumbarumba.

Fifty years on, Tumbarumba Kangaroos has four football teams and six netball teams competing in the Upper Murray League which straddle the north-east of Victoria and the southern alps of NSW.

The fears of the rugby league zealots have been well-founded. The Tumaburumba Greens, once a powerhouse in Riverina rugby league, has now merged with near-by Batlow and play in a minor league competition in Albury-Wodonga however it still has strong junior teams that compete in the Wagga competition.

But the journey of the Tumba footy club has been far from smooth as the podcast, produced by Albury broadcaster Robbie Mackinlay, for the club’s 50th anniversary reveals.

This is the first occasion in which Mackinlay has produced a podcast for a club over a period of more than one season; the ones to date featuring Daysdale, Corowa, and Hay have been chock full of emotion and elation over one season resulting in memorable drought-breaking premierships.

However, the result of his endeavours in this podcast is up there with the emotional roller-caster of the small-town underdogs finally breaking through for ultimate success, in this case, a footy club up against the odds to survive, having to take on a rival code and a league (association), not fully enamoured with its NSW club.

As club stalwart Alan Waters tells Mackinlay, “…for the club to come through after all the hard years when footy wasn’t important to the town means so much to all of us that helped start the club”.

Tumba finally broke through for the elusive premiership in 2012 when it beat Cudgewa in the grand final under local Matt Molkentin, at home under the league’s finals ground allocation, based on final standings.

The town was a sea of blue and white streamers and the decider attracted a crowd of 2000 spectators that witnessed Tumba come from thirty-three points down at half-time to win by 15 points with the skipper booting five goals.

The Tumba Kangaroos produced their greatest season in 2013 when it went through the season undefeated and comfortably beat Bullioh in the grand final also at Tumbarumba. Shane McIntosh, who was assistant coach in 2012, was in charge while Matt Molkentin stayed on as a player. To top it off, the Reserves and Under 16s also won flags.

Mackinlay’s body of work on Tumbarumba amplifies the importance of good coaches and hard-working off-field leaders that have enabled the club to grow and thrive in a hostile environment.

Inaugural co-coaches, locals Jim Wiggins and Simon Guest (who played in Holbrook’s 1970 Farrer league premiership), got the Kangaroos off to a good start but the appointment of Holbrook premiership coach John Cornish in 1974 was the catalyst for the club to develop its football credentials and become more competitive.

Cornish was followed by a succession of notable leaders but the arrival in town of Bruce Forbes as head of social science at the high school in 1980 brought immediate success including a grand final berth.

Forbes, who learnt his football in his hometown of Narrandera was a star with Griffith, and later, a dual premiership player at Wagga Tigers, played a major role in establishing the junior teams, and his wife, Lesley, got the netball going.

According to current president Monty Waters, a key turning point was the club making the Sportground its home in 1982 “The Showgrounds was a rodeo ground, plus it was the home of the Greens, it never felt like home for us”, he told Mackinlay.

Club stalwart and tireless ruckman Mal Vogan, whose induction into the game was at the Bushpigs uni footy club in Wagga after moving from Sydney to study agriculture, moved to Tumburumba in 1983 as a stock and station agent.

After retiring from playing, he coached the Under 16 teams that at various times included his sons Lachlan, Jack and Tom, to four premierships as well as a deep pool of other talented youngsters.

“Having a high school in Tumba gave us access to young players from the town and surrounding district and while many played both codes, we benefited the most when they became adults, that’s if they didn’t leave to study or work”, Vogan told me for this review.

Sydney Swans club great Dennis Carroll recalls his season at Tumba with great fondness, “I went there as a young fella to work in the bank, I was just so glad they had a footy club, we used to all get back to the ‘middle pub’ after games, and training. Great area, great people, wonderful memories”.

Robbie Mackinlay has done it again. He has produced a highly audible podcast which although it doesn’t capture the raw emotion of Daysdale’s 1994 premiership or the sheer joy of Corowa’s triumph in 1968 it does expertly tell the story of Tumbarumba’s grit and persistence as a community sporting club over the past fifty years.

You can check out the podcast here.

When you get to that link, use this button to listen: