Some time ago we wrote about a ground in Sydney that was owned by the NSW Australian Football League.

It was situated on the north west corner of Gardeners and Botany Roads and was part of the Cooper Estate. (Daniel Cooper was a wealthy land owner, merchant, philanthropist and politician who owned 566.5 hectares land in the suburbs of Waterloo, Alexandria, Redfern and Rosebery.  This was commonly referred to as the Cooper Estate).

The particular parcel of land was initially sand dunes and swamp and in mid 1894 was leased on which was constructed the first Rosebery Racecourse.  We have very recently obtained an 1885 map of the Alexandria Municipality on right, showing the position of the ground in red outline.

Not too many years later the NSW Gaming Act was amended to proscribe horse racing on any track less than 6 furlongs (1200 metres) and so arrangements were made for the racecourse to be relocated to an area in Gardeners Road, Mascot (now Eastlakes).  The attached tender advertisement refers to the first Rosebery Racecourse.

The former course was used for a variety of activities before being ‘purchased’ by the NSW Australian Football League at a reported price of one hundred and eighty pounds ($360) per acre (one acre = .4046 hectares).  The site would go on to become a very valuable piece of land.

More research has revealed greater details of the property and an initial map of the land but further inquiries are needed firstly at the Lands Department to ascertain an exact map of the ground itself, whose name it was in and its eventual legal fate.

It is recognized that the events of WWI put paid to any committed ownership of the ground by the league and as Jim Phelan (of Phelan Medal fame) wrote in 1938:

On August 4, when all the state teams were assembled at the Australian Football Ground for the purpose of distance contests at the carnival games, the news was flashed by cable that England had declared war against Germany.  Fate had stepped in and dealt a cruel blow.  Had England’s declaration of war been made a few weeks earlier or later, all might have been well as regards the continuity of ownership of the Australian Football Ground by the NSW Football League.

So much for the maligned future and occupation of Australian football in Sydney.

As we gain more information we will post a further report and eventually release a definitive account of the ground itself in an appropriate publication. 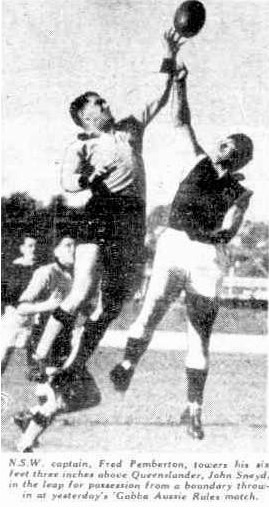 A 1954 match betweeen NSW and Queensland played in Brisbane.

This game was part of the ANFC Div 2 National Championships. It was played on a knock out basis. NSW had defeated Canberra the week before but on this occasion they failed to live up to their standard and were soundly beaten by Queensland 15-17 (107) to 9-23 (77). Bad kicking did not help.