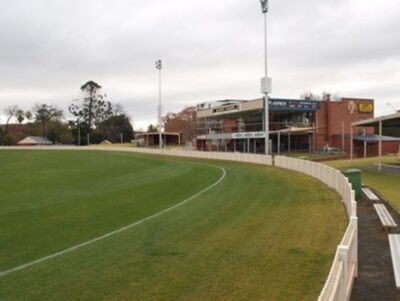 The Albury Sports Ground, home of the Albury Tigers Football Club, is neatly wedged between the botanic gardens, the Murray River and Wodonga Place in downtown Albury. The ground was established in 1868 as the Albury Cricket Ground.

It underwent a facelift in 1900 and  was renamed the Albury Sports Ground.

Its iconic features include the historic grandstand on the north western side, the Albury FC clubrooms on the eastern side, the memorial scoreboard down beside the Murray River pocket and the turnstile entrance gates. Prior to the 1970s, the ground featured a bike track with  associated lights around its perimeter. Nowadays, a netball court occupies the north eastern corner of the precinct.

As a venue for local and regional sport, as well as a focus for civic celebrations, the Albury Sports Ground (ASG) has a long and colourful history. Prior to the emergence of the Lavington Sports Ground as the venue for most Ovens and Murray League grand finals in the mid-1990s, the Sports Ground hosted many premiership deciders.

It was the venue for an official VFL match between South Melbourne and North Melbourne in June 1952 attracting a ground record crowd of 15 000 spectators. ‘South’ won the game by 20 points.

Exhibition and practice matches between visiting VFL teams and local sides were attractions to the ground in the fifties and sixties. Frequently,  the ground hosted inter-league football games. It also served as the ‘home ground’ of in-town rivals North Albury (from 1947 to 1961) before the ‘Hoppers ground, Bunton Park, was established

Cricket matches played between country and touring international cricket teams have been held on the Sports Ground. The touring MCC  team played a Southern Riverina representative team here in 1965.

International cricketers have entertained enthusiastic crowds at the ground. In 1933 the greatest batsman of all time, Don Bradman, thrilled the crowd in making a century for a NSW XI against an Albury team at the Sports Ground.

In the field of athletics, the ASG was the venue for the Albury Gift and countless annual school athletics carnivals. The Albury and Border Cricket Association held ‘A’ Grade cricket matches there for many years. Even a rugby league international game between France and a Riverina team was staged at the Sports Ground in 1951.

The ground also fulfilled a major civic role when it hosted a visit by the Queen and the Duke of Edinburgh in 1988.

The ASG has been graced by some great footballers over the years. Triple Brownlow medallist, Haydn Bunton Snr. starred for Albury and West Albury in the late 1920’s, while 1930 Brownlow medallist Stan Judkins coached the club to the 1937 flag, and later, another ex-Tiger, Doug Strang followed with two more premierships for Albury.

The 1929 Ovens and Murray League grand final between West Albury and East Albury stands out in relation to the bitter sectarian rivalry in the 1920s between two clubs – Albury and St. Patricks. Excessive financial payments to players, a further cause of rivalry between the two clubs, were also seen as harmful to the game. Both clubs were dissolved prior to the 1929 season and two new teams, West Albury and East Albury were formed. West Albury, with strong contributions from the three Bunton brothers (Haydn, George and Cleaver), won the grand final by 14 points.

All roads led to the Albury Sports Ground for the 1932 premiership decider between Corowa and West Albury. Superbly led by Ray ‘Nana’ Baker, Corowa won its first Ovens and Murray premiership in one of the league’s most exciting grand final matches. In the nail-biting finish Corowa held on to win by 4 points.

Co-tenants Albury and North Albury met at a very wet and muddy ASG in the 1948 grand final. In a tense game dominated by heavy rain,  underdogs North Albury, who were in just their second season of O & M football, stormed home wiping out a 20 point three quarter time deficit to win by a solitary goal with only seconds left on the clock.

The 1990 Ovens and Murray League grand final played at the ground is remembered for its brutality rather than its display of football. Dubbed the “Bloodbath” Grand Final, 19 players were reported after a vicious all-in brawl broke out shortly after play commenced. The incident drew media attention around the world. As  for the football, Wodonga overcame their inaccuracy and finished on top of Lavington, in a lack-lustre, spiteful spectacle to win by 20 points.

Not only famous footballers, cricketers, athletes and HRH Queen Elizabeth II have graced the Albury Sports Ground. In May 1928 pioneer Australian aviator Bert  Hinkler landed his Avro Avian bi-plane at the ground during half time  in the Ovens and Murray League game between Albury and Beechworth. A large crowd descended on the ground to witness the historic occasion and fittingly a share of the gate takings was donated to the local hospital.

The Albury Sports Ground is a venue with a rich sporting and  colourful civic history.