Women’s footy in Sydney started in Sydney twenty years ago with five teams.

In 2020, there were forty teams playing across the four divisions of Women’s football in AFL Sydney with ten in each division.

One of the original players in 2000, Michaela Ekman, will take the field for the Magpies on Saturday. “Mickey”, as she is popularly known, along with another pioneer Meredith Gray have been nominated to the inaugural AFL NSW Hall of Fame as part of the 140th anniversary of Australian Football in NSW this year.

Their profiles appear below the story by Yvette Andrews on the first season in 2000:

Yvette Andrews – the inaugural Sydney Women’s’ AFL Secretary from 1999 – 2003 played in the first Grand Final in 2000 when she was a member of the victorious Western Wolves premiership team. She is vice-president of the Inner West Magpies Australian Football Club.

Five teams took the field in the augural 2000 season of the Sydney Women’s AFL – the Western Wolves (based at Picken Oval), Monarch Panthers from Campbelltown, East/UNSW Dolphins, the Glebe Cyclones and Sydney        University.

Players came from all sorts of sporting backgrounds. We had some imports from southern states who had AFL in their DNA. We recruited players from the other footy codes, netballers, hockey players, basketballers, even Olympians. Most of us were very new to AFL. The style of game was rough and ready and not for the faint hearted.

One of the challenges during those early days was getting access to footy grounds. We played at Trumper Park, Monarch, Village Green and Rosedale Oval in the early 10 am slot before the men. And thanks to the support of Western Suburbs Football Club, W H Wagener Oval became the home of the first finals series between the Wolves, Panthers, Easts/UNSW and Sydney Uni.

The Western Wolves dominated the home and away series, were undefeated and strode through to the Grand Final.

The 26 August 2000 was a hot and blustery day. An enthusiastic crowd had turned up to be part of an historic moment in AFL history in Sydney.

Peter Hatley officiated the game. Graham Mumme coached the Western Wolves and Lachlan Worthy, Sydney Uni. Wests captain, Vicky Keys was an experienced player from Western Australia and Meredith Gray, who captained Sydney Uni had worked tirelessly to bring the team together for their first season.

Tasha Gale, a former Australian Rugby League captain, kicked the first goal putting Sydney Uni ahead where they stayed for most of the game. Despite some inaccurate kicking, the Western Wolves clawed their way back to eventually tie up the scores by the end of regular time. But Sydney Uni jumped ahead again with quick goal out of the centre in the first minute of extra time. Remarkably Wests came back again to tie up the scores at 49 a-piece.

A quick mid-pitch discussion took place between the umpires, Phil Davis from the AFL and some SWAFL committee members who were also playing. We hadn’t foreseen the need for a rule to break a deadlock like this. On such a windy day, golden point seemed unfair so the decision was to play another round of extra-time. This time the Western Wolves put the result beyond dispute with two more goals to win 8 14 62 to Sydney Uni 7 7 49.

Evonne Loukas was named best on ground after her goal resurrected Wests’ chances in extra-time. Michaela Ekman, came off the Wests bench that day and went on to be one of the first women players to play over 300 games and is still playing Premier Division 20 years later.

In that first year, NSW (all Sydney players) also travelled to Canberra for the National Championships. The team had wins against the ACT and Northern Territory but was absolutely destroyed by Victoria in the grand final 26.20.176 to 0.2.2.

What the scoreboard didn’t show, however, was the impact that this opportunity to play against women steeped in footy culture and knowledge had on the new and enthusiastic women from Sydney. And although the Sydney competition remained small for several more years, SWAFL became an influential player in the national push to support and grow the women’s game.

Nominations for the inaugural AFL NSW Hall of Fame:

Michaela Ekman has played over 300 games and is the only player in Sydney to have played in every season since it started. She has captained Wests and has one 3 Premierships over the course of her football career. She has represented NSW in the national championship on many occasions. She is the coach of the under 18s at Wests Juniors and has played an integral role to the development of the youth girl pathways at the club.

Meredith Gray was one of the founding members of Sydney Uni. She was on the SWAFL committee for many years and has played for last two decades playing over 200 games. She was the organiser of the 2002 National Championships in Sydney. She represented NSW on numerous occasions. 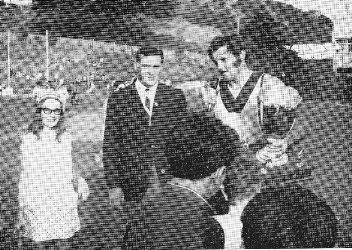