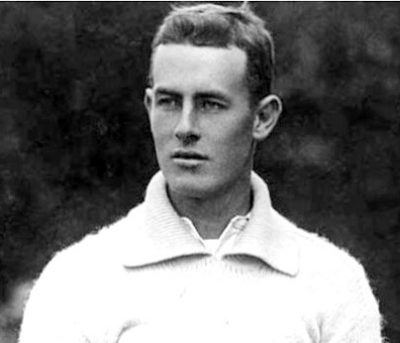 When the Trumper Stand was opened at the SCG in 2008 there was finally acknowledgement that Victor Trumper had played Australian football as well as being a prominent administrator.

The naming of the new stand after Victor Trumper honoured his involvement in cricket, rugby league, rugby union, baseball and Australian football either as a player and/or official.

Highly acclaimed cricket writer Gideon Haigh, who attended the opening, noted the mention of Trumper playing Australian football in Sydney in the early 1890s in his book on Trumper entitled A Stroke of Genius, an “iconography” based on the famous ‘Jumping Out’ photo taken at the Oval in 1905.

Victor Trumper playing the Australian game was first revealed by long-serving NSW ANFL secretary Jim Phelan in the match-day program “Australian Football News” (18 June 1927). Phelan, who had played for Newtown, was a contemporary of Trumper and recalls him being a “beautiful kick”.

The first report of Trumper playing Australian football is in 1890 when he lined up at age 13 for a Sydney junior team against St Ignatius College for the Alexander medals (SMH June 1890).

There is also a report of the district schools’ sports carnival of Trumper winning the football long-distance kicking competition with a drop kick (Illustrated Sydney News 8 October 1892).

By 1894 Trumper was playing senior football for the Sydney club whilst still a school-boy at Crown Street Public. Match reports in contemporary newspapers reveal that in a game against Redfern he booted one of the two goals in his side’s 2-3 to 1-4 victory (SMH 28 May 1994).

There is a further report of him playing for the Sydney club on 23 June when “V. Trumper – who marked splendidly – dodged Fallon, and put up Sydneys’ first goal…” (SMH 25 June 1894).

The Referee was particularly effusive in its praise of Victor Trumper’s play, “Young Vic Trumper deserves a special line. Next year I venture to say Vic will be one of the best forward players in Sydney. He kicks well with either foot, is a safe mark, and plays a plucky game …” (The Referee 11 July 1894)

In the last club match of the season Trumper booted 2 goals for Sydney in their victory over West Sydney at Moore Park on 11 August (Sydney Mail 18 August 1894).

He was elected to represent Sydney in a representative match against Northern District in Newcastle he kicked one of the two goals that enabled the “Metropolis” to win the game two goals to one (Newcastle Morning Herald and Miners Advocate 20 August 1894).

After the NSW Football Association went into recess during 1895, he turned to rugby union playing with Pioneers in the Sydney third grade competition. He then moved up to first grade with the Newtown Rugby Club and continued to play rugby until 1900 after which he retired from the game to concentrate on cricket in preparation for the 1901-02 MCC visit to Australia.

Trumper was also a pivotal figure in the re-establishment of the game in Sydney in 1903 and was elected as a member of the committee that reformed the NSW Australian National Football League (SMH 7 February 1903). He was elected to the committee to seek out players for the code given his previous involvement in the game as a player. He also took on the role of secretary of the newly formed Paddington football club (SMH 18 February 1903).

The NSW ANFL match day program, “The Australian Footballer” was available for purchase at his sports store in Market Street in the city. Trumper and Carter were agents for Sherrin Footballs and sold boy’s footballs from 1/6d and Match II footballs from 7/6d.

Trumper’s association with Australian football has been maintained over the years with the re-naming of one of the game’s pre-eminent grounds Hampden Oval in Paddington as Trumper Park in 1931.

Trumper Park was also the home ground of the Paddington Cricket Club in the Sydney grade cricket competition until its merger with the now defunct Sydney District CC in 1965.

Trumper was also a talented baseballer and played for the Paddington club and represented NSW against Victoria at the SCG in 1900 and 1903.

He was a key figure in the establishment of the NSW Rugby League in 1908 and hosted meetings to discuss the formation of the break-away competition at his sports store in the city. He was the inaugural treasurer but was not re-elected at the start of the second season.

But as Phelan wrote in 1927, “Trumper became an official of the Paddington Club, but some years later attached himself to the rugby league code – an attachment which must have brought him, in after years anything but pleasant memories” (Australian Football News, 18 June 1927).