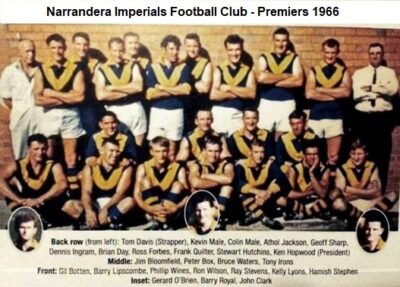 The first fine flush of infatuation for Australian Rules started stirring for me in the late fifties when the family moved to the hot, dry outback town of Hay in western NSW.

Before that we lived in Goulburn, a place where they send Arctic explorers to acclimatize and references to Australian football were rarer that naked underwater Hockey in Siberia.

Dad, who was born in Flower Street Essendon, a couple of hefty John Coleman punts from Windy Hill, had been appointed the Hay Town Clerk, and once it became known he was a devoted ‘Rules man, was quickly persuaded to accept the Presidency of the Hay Rovers Football Club.

In the late fifties, Hay was a member of the now long defunct Edwards River League, based around Deniliquin and comprising teams such as Pretty Pines, Blighty and Conargo.

Hay was a lonely, isolated town, the nearest large towns were around 160 kms distant and back then, the roads in and out were all unsealed and every away game required a minimum 200k dead flat round trip. This was challenging enough when the roads were dry, but after heavy rain was like trying to swim through a sea of black molasses in a raging torrent.

Looking back, the fact that inter-town football was played at all by Hay, considering the obstacles, is astounding.

About 1960, Dad convinced the club that it would be much better off joining the Barellan League. There was apparently some skullduggery over the ringing in of players from the higher standard Murray League in a Deniliquin side Hay played in a late fifties Grand final which left many highly disgruntled. Hay lost both the game and a significant sum of money gambled by supporters on the result.

Dad also reasoned the standard would be higher and there would be much closer contact with the mighty South West League. Barely remembered hamlets like Sandy Creek, Binya and Kamara Moombooldool along with the small towns of Barellan, Yanco, and Beckom were some of the teams pitted against the newly accepted Hay Rovers.

How wonderful were those days of Saturday football on the picturesque Hay Park oval. The iron sheeted, lineament scented dressing sheds which my father forbade me entry, for fear I’d be contaminated by the rough language, (I always disobeyed and snuck in unobtrusively anyway); the masculine nicknames, Cocky and Blue, Bull and Stumpy, Pig Shooter and Thumper; the saveloy seller named Foley who displayed his advertising sign, ‘Have a roll with Fol’ in front of a huge wood fire heated steel barrel and the magical home games which Hay invariably won inspired by roaring speeches delivered by fire and brimstone coaches, always thunderously critical irrespective of the score.

In 1962 Hay played off for the premiership against Sandy Creek which was led by a man with a fearsome reputation in Riverina football, Les Stockton. Les was reputed to fight like a champion bare knuckle Beefeater in Wellington’s Waterloo army and was the bogeyman we had to neutralise that day. Hay was captain coached by a superbly talented footballer recruited from Tasmania by the name of Darrell Hills.

I have absolutely no recall of anything in that epic Grand final bar the final minute. Hay was trailing by two points when our young wingman, Tony Tassell took possession of the ball on the wing with open space ahead. Alongside was Darrell Hills whose kicking accuracy was like the trajectory of a William Tell arrow. Hay had never won a premiership. This was the moment.

Perhaps unnerved by the tension and excitement, Tony ignored the unattended Hills pleading for the ball, and rushed his kick. I was directly in line and can still replay the agony over fifty years later as it deviated sightly to the left in flight and missed; the siren sounded simultaneously, leaving Hay one point in arrears.

It was my first crushing football disappointment. I felt as if I’d had my hands on the Holy Grail only to have it ripped away. Hay was to remain a premiership virgin until 1995, by which time we were long gone.