As the game celebrates 140 years at the SCG, Dr Rodney Gillett looks back at a larger-than-life character with a unique record at the famous old ground.

As Greg Harris, the coach of the newly assembled Sydney Swans Under-19 squad, strode out on to the SCG in late Spring 1988 to conduct training, he turned to me, and said: “You know I’ve played three different codes of football on this ground.”

I said: “Yes, Huey. I remember you taking eighteen marks out here for Easts in a match against North Shore a few years back.”

“Yeah, plus I played rugby and rugby leagues games here too …,” he added, leaving that last comment to hang in the warm air. “Now, put the cones out for the boys to do the handball drill!”

Greg Harris was known throughout his sporting career as “Huey”, shortened as Aussies are want to do from “Baby Huey”, the oversized baby duckling in the Harvey comics in the 1960s. The nickname was bestowed on him by his Sydney Uni rugby team-mates after he wrestled a sumo wrestler on a tour of Japan.

Huey and another former East Sydney champion, Ray Millington (to be featured in Part 2), are believed to be the only two players to have played three codes of football on the SCG.

In Huey ’s case, his father, Col Harris, an original inductee into the AFL Sydney Hall of Fame in 2003, also played on the famous ground when he represented NSW in 1949 against Queensland.  Huey coached NSW state teams in matches against Queensland in 1983 and 1990.

He started playing junior football with the Penshurst Panthers in the St George district competition, and then graduated to the St George seniors at age 15 in 1970.

Following an impressive debut in a Sydney representative team while still at school he received an invitation to train with Richmond but chose to take up a scholarship to study at Sydney University.

His first experience of playing any code of football on the SCG came in 1972 when the rugby league team from his school, Kogarah High, played against Farrer Memorial Agricultural High School, from Tamworth, in the final of the state-wide University Shield, which Farrer won.

At Sydney University, Harris quickly adapted to rugby union. “I found it easier to play than footy as it was a 180-degree game,” he told me in an interview for this article.

In his second season for in Sydney’s rugby union competition, in 1975, he was a regular in Sydney University’s first-grade team and he played at No.8 for a combined Sydney team in its defeat of an England XV at the old Sydney Sportsground.

A fortnight later, he played for the NSW Under 23 team against the Queensland Under 23 team in a curtain-raiser to the Wallabies v England Test match at the SCG.

Following graduation, Huey returned to rugby league. He signed with Cronulla-Sutherland, where he mainly played reserve grade, but this included a final on the SCG in 1978.

“It was a great thrill to play at the SCG”, Huey said. “I usually played fairly well in games there. The atmosphere is special, and you were conscious of the crowd noise even in a curtain-raiser”.

Harris returned to Australian Football the next year, in 1979, with East Sydney, which turned out to be the ill-fated “flag’s-in-the-bag” season in which the Bulldogs, under former Fitzroy star Alex Ruscuklic, went through the roster matches undefeated, only to lose both finals – out in straight sets – as the saying goes.

However, in the club’s much-celebrated centenary season in 1980, Huey sustained a knee injury during the opening rounds which ruled him out for the rest of the year including the grand final at the SCG.

Legendary Easts president Jack Dean, a contemporary of Harris’s father, Col, in state teams, recognised Huey’s astute leadership skills. He arranged for Huey to take over from Austin Robertson as the playing-coach in 1981, and took Easts to a premiership with a victory over the Sam Kekovich-led Newtown, in the Grand Final.

Harris added further premierships to his record when he coached Easts to victory over Pennant Hills and Balmain respectively in the 1982 and 1983 grand finals, cementing his place among the best all-time coaches in Sydney football. 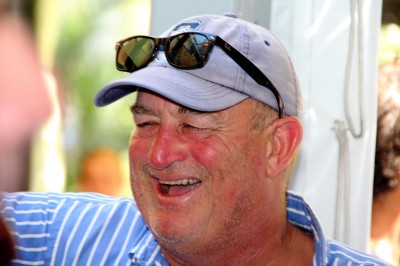 While he is university educated, Greg could slide easily from one group to another and was able to unify diverse people into one team with a common goal”, Easts’ premiership and State back pocket player Ted Pleming reiterated when we discussed this story.

During the 1984 and 1985 seasons, the local Sydney clubs played against each other in curtain-raisers to the Sydney Swans matches on the SCG.

East Sydney often featured in these curtain-raisers, and the smaller ground suited the hulk-like physique of Harris, whose ability to read the play enabled him to win a pile of possessions.

The Swans Reserves hosted their matches in Melbourne until the end of 1985. The following year, in 1986, they too were finally brought to Sydney.

When the Swans decided to base an Under 19s team in Sydney for the 1988 season, Harris was a logical choice to coach the squad, given his teaching background at Sydney Boys’ High School and his success with NSW development squads. The Under 19s played home games at the SCG and away matches in Melbourne.

Huey’s connection with the SCG was deepened when he took on the role of senior chairman of selectors for Swans coaches Ron Barassi and Rodney Eade from 1994 to 1996.

It was in 1996, that the Swans made their first grand final appearance since 1945 after famously beating Essendon by one point kicked by Tony” Plugger” Lockett after the siren in the preliminary final also at the SCG.