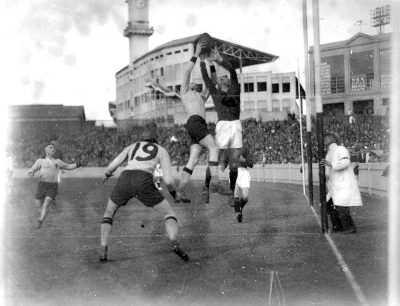 New South Wales finished fourth at the eight ANFC Carnival played in Sydney going down by just ten points after leading at every change to Western Australia in the play-off for third.

The “Light Blues” also finished fourth behind the “big three” at the 1930 Carnival in Adelaide and in Melbourne in 1927.

The Canberra ANFL, which had been established in 1925, was a new entrant at the 1933 Carnival.

Canberra, NSW, Queensland, and Tasmania played a round robin, with the winner playing off against the lowest-placed state of the round-robin between Victoria, South Australia and Western Australia.

Victoria played two extra games, one against NSW to open the Carnival, and a second against Tasmania.

The Carnival was officially opened by the Governor-General Sir Isaac Isaacs while the Prime Minister Joe Lyons bounced the ball for the first game between NSW and Victoria. The opening ceremony and march by teams around the ground was held in between the two matches on the first day and was attended by 6000 spectators.

NSW took on reigning champions Victoria in the opening match and despite a valiant effort were well beaten to the tune of 53 points by the southerners led by arguably the greatest VFL/AFL captain of all time, Syd Coventry, who skippered Collingwood to four successive premierships, 1927-1930, as well as leading Victoria to national championships in 1930 and 1933. He also won the Brownlow Medal in 1927.

The Light Blues were coached by former St Kilda captain Sam Gravenall, who went to North Fremantle in the WAFL and represented Western Australia at the 1908 Carnival. He coached Essendon in 1922 and Subiaco in 1927.

Newtown follower Jack Ludlow was captain of NSW, about whom The Sydney Sun (4 July 1933) wrote, “…a man who can rally his players around him when the fortunes of the game seem to have deserted them”. Ludlow came to Newtown from VFA club Northcote in 1930 and went to play with North Shore from 1934-37. He represented the State eight times.

The NSW team was bolstered by the inclusion of six players from the Barrier Ranges Association (Broken Hill). Seven Broken Hill players had been included in the NSW team for the 1930 Carnival and widely regarded to have lifted the performance of team. This was again the case at the 1933 Carnival.

In the next round NSW scored a convincing 85 point win over Queensland (Queensland did not beat NSW at a Carnival until 1958), 19.22.136 to 6.15.51. The best player list again featured Jimmy Stiff (2 goals), South Sydney full-forward Stan “Powder” Powditch (5 goals) skipper Jack Ludlow and his Newtown team-mate Stan Lloyd at centre half back.

A third quarter burst of seven goals 4 behinds enabled the Light Blues to gain the upper hand over Tasmania and to go onto record a 25-point win. NSW beat Tasmania at both the 1930 and 1927 Carnivals but had lost to them at the 1924 Carnival in Hobart. Jimmy Stiff (2 goals) was again named best player along with Powditch (6 goals), Troughton in the forward pocket with five goals, Crosland (4 goals), Stokes and McKoy.

NSW topped Section B and earnt the right to play Western Australia for third place. In an absorbing contest the Light Blues that had really gelled together as a team with the Sydney competition leading goalkicker Powdith and Troughton from Broken Hill combining up forward to form a potent attack.

For the first time there was an award for the best player at the Carnival named in honour of the General Manager of the ABC, Major Condor, who ensured national radio coverage of the championships for the first time.

The inaugural award was won by NSW’s diminutive rover-forward pocket Jimmy Stiff who polled 5 votes – the 1 vote awarded for each game – in every game he played in. This included the games against Victoria and Western Australia. The votes were cast by W.S. “Jumbo” Sharland, the pre-eminent media commentator of the period, and central umpires, Jack McMurray and Bob Scott. Jack Collins (Victoria), WA’s Ted Fleming and Ken Dinnerville (Canberra) were joint runners-up on 3 votes, and triple Brownlow medalist Hadyn Bunton finished on two votes.

The results from the 1933 ANFC Carnival are listed below: