This photograph of the scoreboard at the Sydney Cricket Ground taken during the 1933 Australian National Football Carnival shows an unusual feature for an Australian football scoreboard. 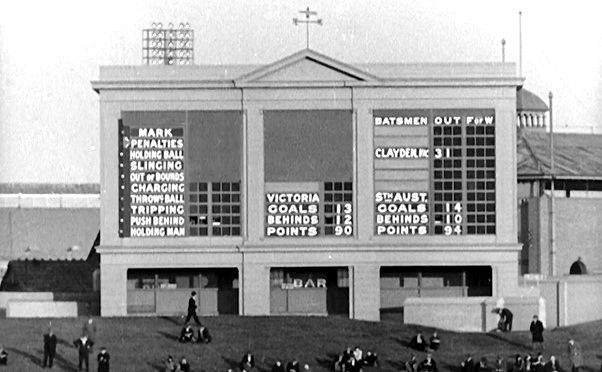 The organisers of the carnival hoped that many Sydneysiders would be interested enough in attending a national sporting event to want to come along to at least one match.  At the same time they were keenly aware that people with no knowledge of the game would find it difficult to follow what was happening on the field.  In particular they worried that the reason for free kicks being awarded might be so obscure as to make some first-timers lose interest.

They hit upon the novel idea of showing the reason for penalties on the scoreboard.  As the Football Record for the carnival pointed out:

“On the Scoring Board a white light will be shown opposite a number when the Field Umpire has blown his whistle; an by reference to the table below followers of the game will be able to ascertain for what reason the penalty was given.

Although there are several other minor infringements, the ones enumerated will sufficiently cover the principal breaches of the rules.

In the case of a mark being signalled, it is not an infringement but merely to denote that a player ahs taken a mark…”

Penalties for which a free kick is awarded:

4   KICKING OUT OF BOUNDS

In the event numbers were not used on the scoreboard but rather the description of the infringement was put up.

It was the use of the cricket scoreboard of course which made this possible.  The scoreboard slots where the infringements were posted were those used for the names of the fielding side in cricket matches.  The arrow that can be seen next to the word Penalties on the scoreboard was used for cricket to slide up and down the board to mark the current bowler and the light next to each panel was turned on to indicate the fieldsman.  The scoreboard was perfectly designed for its new use during the carnival.

The carnival organisers were aware that their move was an innovation.  They proudly noted in the Record that their method of explaining the rules was a “novel method … being adopted for the first time in the history of football in Australia.”

The innovation did not go unnoticed in the southern states.  The Adelaide Advertiser for 2 August 1933 pointed out the unique nature of the scoreboard while the Hobart Mercury of the same date noted that many of the audience who attended the opening games “viewed the Australian code with tolerance bordering on indifference.”  They came only out of curiosity but soon “found themselves cheering the brilliant and robust game.”  Perhaps it was the ability to understand the rules a little which helped in this transformation.

The scoreboard in action can be seen in a surviving newsreel snippet of the carnival’s Victoria – South Australia match held by the National Film and Sound Archive.