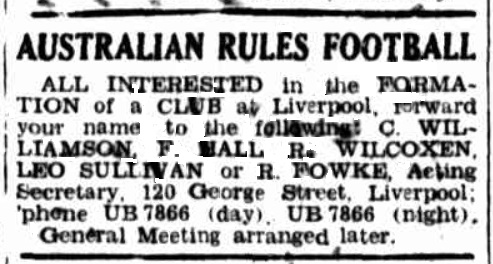 Committeeman, Ian Wright came across an interesting newspaper article regarding the formation of the Liverpool Club in Sydney in 1949.

Not a lot of descriptions of how and where clubs like this started are publically available so this goes to show the value of providing reports of proceedings to the local media, in particular, newspapers.  The digital age cannot provide such history.

The report in the “Biz”, a local rag circulating in the Fairfield area in Sydney not only provides an account of events but also gives us a copy of the advertisement placed in the same newspaper together a preliminary article the week before the meeting.

Over 40 enthusiastic followers and players of the Australian Rules Football code attended an inaugural meeting held the home of Mr C. Williamson in Northumberland Street, Liverpool, last Monday night. It was decided to form a club to be called Liverpool Australian Rules Football Club and to affiliate with the head body. The matter of guernseys is creating some difficulty, as manufacturers stated that it will be two years before they could supply a set. However, the club will probably overcome this problem.

A practice match will be held on Bigge Park Sunday next at 10 a.m., and all players interested are invited to have a run. Already fifteen players have notified their intention of playing. At the conclusion of the meeting, Mrs. C. Williamson and her daughters served a very dainty supper.

And despite several name and club colour changes, the Liverpool Club is still in existence, now 70 years old.  It played its early games at Woodward Park, located in Hoxton Park Road, then later at Liverpool Showground and eventually to Rosedale Park (as it then known), Warwick Farm from 1955.  They were initially known as The Rangers.

A baker, Cliff Williamson, was the first president of the club while former St George premiership player, Keith Wilcoxen took on the secretary’s role and bank manager, Austin Prigg settled in as treasurer.  Leo Sullivan was the captain coach.

This is a photo of the 1997 NSW team that defeated the Victorian Amateurs in Wagga on June 7 1997.

We dont have a lot on this game, mainly because the NSWAFL did not publish an annual report that year, if they did we do not have a copy. What we do know is that NSW 89 d Vic Amateurs 54 at Maher Oval.

If you have some more details, let us know.