In 1947, an All-States Carnival was played in Hobart.

These seven team contests were played about every four years.  After World War II because of the disparity in standard, the Australian National Football Council,  divided the competition into two divisions.  New South Wales found themselves in division two along with Queensland, Tasmania and Canberra.  This meant in Hobart they should have played three matches;  They won their games quite handsomely against Queensland Canberra then went down in the final game against Tasmania by ten points 13-18 (96) to 16-10 (106).  They also played South Australia who were a Division I team however were convincingly defeated.

Following the game it was reported that five of the New South Wales Australian players in their carnival team were offered contracts by two Tasmanian clubs.

The Hobart Club offered Sydney’s captain-coach, Jim Cracknell, Albury FC’s star centre Jim Mathews, and Newtown’s Emrys Owen £10 a week, including a job. Clarence Football Club offered Roy Watterson from the Newtown Club, who would later go on to coach in the Riverina, and South Sydney’s Ron Matthews a job at £8 a week and a retainer of £3 a week.

The report said that the offers would hold good for the following season. Apparently the players are considering the offers, but unknown if they took them up. 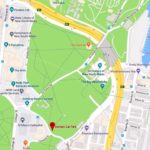 More than likely, the majority of those reading this will have no idea where ‘the Domain’ is in Sydney.

In 1816 Governor Macquarie inaugurated what are now the Royal Botanic Gardens and the ‘Domain’, on land that his predecessor, Arthur Phillip had set aside as a ‘Governor’s demesne’ [a piece of land attached to a manor and retained by the owner for their own use] late in the eighteenth century.

It is situated to the south of the Opera House and behind the NSW Parliament Building.  The land is home to the NSW Art Gallery and also Mrs Macquarie’s Chair.

The subsequent growth of Sydney’s magnificent Botanic Gardens was at the expense of the Domain. The Domain now exists only in four small precincts, where once it covered all the area from Woolloomooloo Bay to Circular Quay, and south to Hyde Park. Encroachments over time – such as in 1942, when Domain land was taken for naval fuel tanks, and during the 1960s when land was taken for ramps for freeways and traffic tunnels – have greatly diminished its original size.

The venue was also used for political orators of a Sunday who used to gather people in their thousands to listen to these various soap box speakers.  Sadly this part of Sydney’s history is gone.

However at lunch time, midweek, a few sports are still played there, in particular soccer and touch football while netball courts are located on top of the Domain carpark.  The park was also the scene of a midweek city business houses rugby league competition in the fifties, sixties and seventies.

People could be seen hurrying from their city offices the short distance to the Domain to watch or play sport their during their luncheon period.

On Wednesday 27 August 1947 a lunch-hour game of Australian Football was played before a crowd of 500 people at the Sydney Domain.  Eastern Suburbs player and former Carlton star, Clinton Wines, was instrumental in having the game played.  The teams were made up of a number of Sydney first grade player including test cricketer, Keith Miller who then played with the Sydney Club.

Although reports on the game (we think there was only one), are scant we can provide some detail on the leadup to the match:

Test cricketer Keith Miller, and NSW captain Roy Hayes lead the two teams in what was described as a lunch-hour promotional match.

Nine State players and other outstanding first-graders took part. Many of the players worked in the city, but others travelled from distant suburbs to participate.

Besides Wines, Newtown captain Alan Smythe along with Ron Matthews, policeman Neil Stevens, Roy Geddes, Ted Larsen and Darcy Coleman were all involved.  It was reported “that many spectators, who have never seen the code, would get an idea just how spectacular it is,” said Hayes, the captain and coach of the Eastern Suburbs Club.

“The Australian Council is spending money on fostering the code in NSW and Queensland, but there Is no better way of making progress than ‘to bring the game before the public. “Hundreds of people walk in the Domain and Gardens In the lunch-hour, and we want them to see the match.” he added.

The game was played in two 25 minutes halves.  Many of the players had to dash from their city offices at 1:00pm then be back at their work place by 2:00pm.

Jack Dean, (now deceased) a former member of the History Society Committee played in the game and said it was very popular amongst the lunchtime crowd.  Dean, a plumber, had to organise himself to be ready to go at 1:00pm and then back to his work in the Eastern Sububs of Sydney.

We have no record if other matches were played or the actual result of the game but were told that further games were planned for 1948.  They did not go ahead.

The concept of Lunchtime AFL at the Domain could well be taken up by present day administrators of the game in Sydney who might want to schedule an AFL 9s game or a modified Womens AFL match on this popular Sydney lunchtime venue.