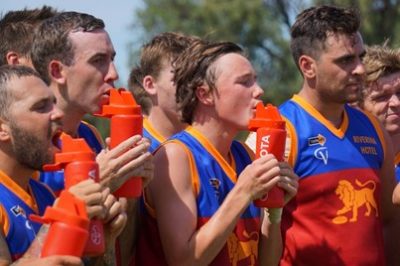 The Hay Football Club was formed in 1876 and has overcome the “tyranny of distance” to fly the flag for the game in the western Riverina ever since.

Hay (population 2400) is located on the north bank of the Murrumbidgee River half-way between Sydney and Adelaide with Balranald to the west, Narrandera to the east, Deniliquin to the south, and Booligal to the north.

And at different times over its history, the Hay footy club has played in competitions to the east, west and south as well as amongst themselves.

Hay currently plays in the Golden Rivers Football League against clubs based on either side of the Victorian-NSW border. The nearest opponent is its oldest rival Moulamein, 120 kms away to the south-west, and the furthest is 299 kms away at Nullawil, deep in the heart of Victoria’s Mallee district

For a time in the early 1970s the Hay club wondered if they would ever find a competition to play in after the Barellan League disbanded and approaches to the South West league based around Narrandera and the Echuca and District league were all rejected.

From 1972 to 1975 the Hay Footy Club had to run its own local competition with four teams.

“It kept us going,” according to Hay football stalwart Robert “Buck” Howard, who played for the Saints in the local competition. “It was fun, but we got tired of playing each other, and we needed under-age footy for the kids”.

A break-through came for season 1976 when the Mid-Murray League based around Swan Hill finally admitted the Hay Rovers on appeal into the competition. But the Rovers which had worn a red and black strip in the Barellan league had to change to red, white and black because of a clash with Nyah West.

The Rovers struggled to compete in the Mid-Murray FL which is a major league and sought a move to the Kerang and District League (renamed Golden Rivers in 1998) in 1981 which was granted, but it involved another change of colours as Quambatook wore the Saints colours, so Hay became, and remains, the Lions.

Hay came fifth in its first season in the new competition; it was also able to resume its rivalry with Moulamein which stretched back to the mid-twentieth century for the Conroy Cup.

The newly minted Lions break-through for the club’s first-ever premiership when it took out the 1982 title with a stirring 13-point win over Appin, a rural district just outside Kerang.

The Hay Lions famously won the 1992 premiership which was the subject of a recent podcast by Albury broadcaster Robbie Mackinlay. You can hear it https://yoursportandmedia.podbean.com/e/hay-1992-the-triple-treat/.

The Lions won all three grades that season, and then won another senior flag in 1995 by beating Moulamein.

The Hay Football Club was founded in 1876 at a meeting at the Royal Hotel:

The new club was duly formed with “…fourteen members subscribing names, and there is hearty prospects of play this present season” (The Riverina Grazier, 24 May 1876)

The new club initially played matches between its members just like in other country towns. The Riverina Grazier (31 May 1876) reported of a football match arranged for the Queen’s Birthday “… a good romp outside will do both old boys and young boys much good”.

White settlement began in 1840 with a coach station and a town was established in 1859. The area on the Hay plain soon became renowned for its fertile grazing land and pastoral runs were taken up for producing wool and fat lambs for the Victorian goldfields.

Hay became a major transport hub with the main form of transportation the paddle steamers that conveyed the wool down the inland river systems to Echuca on the Murray River and returned with stores for the town and district pastoral runs.

The NSW Land Selection Acts of the 1860s and 1870s unlocked land held by the squatters for closer settlement by new arrivals to the area mainly from Victoria who bought their recently established football game with them.

In 1882 the railway line was extended to Hay from Narrandera thus connecting the town to Sydney, and this facilitated inter-town challenge matches with Hay travelling to Narrandera.

By 1885 Hay had regular challenge matches in town and district from teams called the Snaggers (shearers), Half-Holiday Association (shop-keepers and retail workers), the Golden Templars’ Lodge, and the Eli Elwah sheep station (shepherds/farm hands). The Riverina Grazier reported that, “…200-300 attended the football which is fast gaining popularity in Hay” (25 July 1885).

In 1895 the Hay Football Council was formed to administer the local competition.

The rail connection to the east enabled Hay association to play in a round-robin tournament against the Wagga and Narrandera associations in 1899 that attracted a crowd of 700-800.

Hay teams continued to use special trains to travel east to play in Riverina knock-out carnivals at Leeton, Whitton, Narrandera and Ganmain right up until the mid-1950s:

Albury based Robbie Mackinlay has produced another podcast.  This time it centres on Hay Lions Premiership win of 1992.  Rod Gillett previews the story which you can listen to by clicking the icon below.  This will take you to the Glory Days site where you can open the podcast.

Hay has always been far from anywhere. This has made it problematic for the town’s football club, which was formed in 1876, to compete and to retain and attract players.

But as, country football broadcaster Robbie Mackinlay’s latest podcast, Hay 1992 – Triple Treat reveals it all came together in 1992 when the Hay Lions won all three grades in the Kerang & District Football League (now known as the Golden Rivers Football League).

Like it is for most country footy clubs, it’s a matter of getting the right coach.

For Hay the bush telegraph worked a treat when a former Hay auctioneer John “Chum” O’Dwyer started his own stock and station agency in Ariah Park and on a return visit home informed club president Ted Hill and head recruiter Robert “Buck” Howard that APM’s coach Dennis Dunstan “was on the move”.

Dunstan, originally from Balranald, had taken on the Brown Bombers’ coaching role in the Riverina Football League at age 19, but after two seasons was ready for another job.

Mackinlay recounts the story of how Dunstan went to Hay for a due diligence check and to meet the Hay footy club officials and some of the players at the club’s watering hole, the New Crown Hotel.

“It was after cricket, and I looked around the pub and saw all these young blokes, 6’2” or 6’3”, and I thought to myself there’s some potential here” Dunstan told Mackinlay in an interview for this podcast.

Dunstan, initially declined the Hay coaching offer, but having identified the right man for the job, Hill and Howard persisted and finally got their man. It was a premiership winning move.

The new coach bought his mate from Balranald, Royce Simpson, who had gone with him to APM, to Hay. Simpson had an outstanding season winning the competition best and fairest award as well as the medal for best afield in the grand final.

Additionally, some new players fortuitously arrived in town for work and other opportunities including Steve Lockhart, a stock and station agent from Ivanhoe, Brett “Axe” Whitfield following up on a romance, and solid half-forward Rhys Williams, who had come up from Melbourne to run a motel owned by his partner’s father (the operator of a Melbourne two-up school).

And then just before clearances closed, the Hay Lions secured the services from Balranald of star defender Jamie Gordon and speedy forward Ronnie Murray, who would “top-up” the list and lead the charge into the finals, and ultimately, the club’s second ever premiership.

Gordon, who hailed from Ariah Park-Mirrool where he had the heart-break of playing in three losing grand final teams, told Mackinlay that he and “Muzz” would travel over from Balranald for training (a round-trip of 266kms on the Sturt Highway), go to the New Crown for tea and team announcements, then drive home dropping Murray off down the end of a lane just outside town.

Gordon told Mackinlay that this was his “most memorable year in football” after stellar stints in the South-West league, ACT AFL, RFL, and the Mid-Murray league.

Hay finished the season unbeaten (tied first game with Ultima) on top of the ladder and went straight into the grand final after beating Wandella in the 2nd semi final, then came up against the league’s most successful club again in the grand final at Murrabit.

The Bombers kicked the first 4 goals of the game and had control of the game at quarter time, but the Lions came back to with the wind to boot eight goals and be in front at half-time. By booting four goals against the breeze in the third term they retained a handy lead at ¾ time, then with coach Dunstan booting two early goals in the last quarter the Lions went onto to record a famous victory.

In a grand day for the Hay Football Club, they also won the Reserves and Thirds; it was the Reserves fifth flag in six years.

Robbie Mackinlay captures the pivotal moments of the season and how it came together. He reserves the most effusive praise for the coach “who pulled a town and playing group together”. And evidently, they played just as hard off the field.

The premiership celebrations were extensive. Mackinlay’s interview with Robbie Jackson, the competition’s Rookie of the Year, reveals a week of partying such that club official Buck Howard was worried that the players wouldn’t ever go back to work!

Jackson tells Mackinlay that “the whole town got behind us and we were like rock stars when we won all three flags”. He recalls the reception in the packed Memorial Hall that was overflowing with players and supporters that consumed a staggering eighteen kegs of beer!

“The week after the grand final we had kegs at every pub. There were seven pubs in Hay at the time”, Jackson told Mackinlay.

According to Jackson, “We had a great bunch of blokes, good mix of locals and imports, but it was the coach who bought us together”.