Over the years in Sydney football there have been a number of teams who finished minor premiers and yet lost their two finals games eliminating them from the challenge or grand final. (see tables below)

The worst of those have to be the years when the minor premier went through the season undefeated only to be unceremoniously and embarrassing dumped in the preliminary final.

The only two seasons we can find were the East Sydney experience in 1979 when the side won twenty out of twenty h & a games and were at unbackable odds to take the flag.  The other was the strong Western Suburbs combination of 1957 that won their eighteen competition games straight.  They took 58 minutes to kick their first goal in the preliminary final and went into the rooms for the long break 30 points down.  They failed to get their machine in motion losing the game to Sydney Naval 10-8 to 4-11.

Easts was coached by former Fitzroy gun, Alex Ruscuklic, a non playing coach who used some unusual tactics to gain victory.  One was to have his side run a victory lap following a win and get a player to call out “What’s in the bag?” with the remainder of the side answering “The flag.”  This was not a popular move amongst many in the side.

1979 was the start of a new, but eventually unsuccessful change in Sydney football.  There had been a coup at the previous year’s league annual meeting which introduced a new influence on the league and competition.

In that year, Tasmanian, Rob Claridge, playing with Easts, won the Phelan Medal and the club’s goalkicking sensation, recently deceased, Peter Ruscuklic, won the league’s leading goalkicking award, booting 121 at full forward. The club won the reserves grand final and conducted a successful licensed club at Bondi Junction.  All that alluded them was 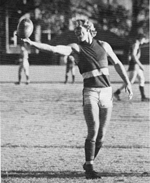 With twenty wins and no losses, no sane person could be guilty of betting against them but it all started in the second semi where East had to fight back from a 12 goal deficit in the third quarter.  Not even a bag of a dozen goals from Peter Ruscuklic could help his side to victory and they went down 26-12 (168) to 21-13 (139).

In the history of the league from 1903,  Western Suburbs in 1957 and East Sydney in 1979 are the only clubs to have endured the pain of no home and away losses and no final wins.  In 1916 Balmain, 1952 Western Suburbs and again in 1973 along with East Coast Eagles in 2006 all finished minor premiers without defeat but failed to win the flag.  These sides though, all made it through to the grand final.

Statistics do not include Sydney football between 1880-94 when the Sydney Football Association was the controlling body for the game.