The footy team from “Struggletown” used to struggle to beat the “Big Three” from across the border in the ACT but over the past forty years the Queanbeyan Tigers have become a powerhouse in the AFL Canberra competition.

The Queanbeyan footy club has an established ground, Margaret Donohue Oval, with an impressive, licensed club facility established in 1983 across the road in the south of Queanbeyan. 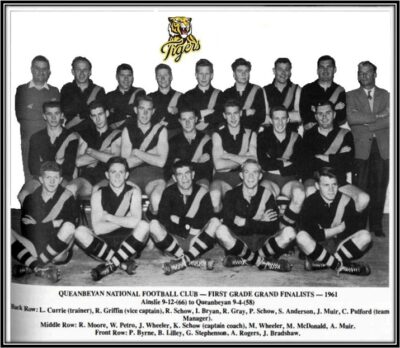 According to club historian and Queanbeyan’s Mr Football Ron “Chook” Fowlie 1960 was the year the Tigers began to match it with the “Big Three”: Ainslie, Manuka and Eastlake according to the club’s excellent history book Tiger, Tiger, Burning Bright… 1925-1988.

Former star local Keith Schow had returned to coach after coaching St George in the Sydney competition from 1956-58. He had won the Mulrooney medal for the best and fairest in the ACT AFL in 1950 at age 19, and then went to Collingwood for two seasons before returning to play with combined Acton-Queanbeyan teams that won premierships in 1953-54.

He is regarded as one of the best full backs to have played in the ACT AFL, and according to his vice-captain Bob Griffin he was a prodigious kick and “close-playing defender”.

Keith, and his younger brothers Ross and Peter, on the half back flanks with Griffin at centre half-back were the mainstays of a rock-solid defence that were “spoilers and very tight” according to Bob Griffin in an interview for this piece.

The Schow brothers had all come through the Tigers’ junior organisation that had been started by their father George in 1931 that formed the nucleus of the senior teams in this period.

Under Keith the Tigers made the final four in 1959 but were eliminated in the first semi final by Ainslie. The same fate bedevilled the club again in 1960 but at last they were competitive.

In 1961 after beating Manuka in the first semi-final and Eastlake in the preliminary final, the Tigers made their first grand final since 1941 but succumbed to Ainslie by 8 points in the grand final.

Bob Griffin can’t recall too much about the grand final loss played before a record crowd of 6,000 at Manuka Oval except that Ainslie were “too good on the day”.

“Griffo” played 151 games for the Tigers after starting in the juniors, and after “getting too slow at age 29” he went to play rugby league for the Queanbeyan Blues.

“I grew up playing both codes. I played for the love of it. All my mates were playing.  It kept us pretty fit. We used to love taking on the Canberra clubs, we’d bung on a ‘blue’ and head straight back over the border after the game to have a drink at the Royal” he nostalgically recalled.

He does recall playing on a young Alex Jesaulenko from Eastlake in the year before “Jezza” went to Carlton in the VFL, “He was very hard to put off his game!”.

Bob, now aged 84, is still involved with the Tigers and helps out on match days as a masseuse.

“The Tigers are a great club and have a terrific set-up. It’s all down to ‘Chookie’”.

Ron Fowlie has done absolutely everything at the Queanbeyan Tigers since starting in the juniors as a player: secretary, president, football manager, Under 19s coach, club secretary-manager, and the driving force behind the establishment of the licensed club.

The Tigers have won ten premierships in AFL Canberra since 1985 after securing former Riverina star Brian Quade from rival club Manuka in 1984. “Ocker” led the Tigers to their drought-breaking premiership in 1985 over old-rivals Ainslie – the club’s first since 1941.

In an interview for this piece Brian told me that the Queanbeyan Tigers was more of a country style of club that he was used to from the Riverina. “I recruited heavily from the Riverina and they fitted in well. Fellas like Leo Lucas, Jack Lucas, Peter Sculley, Richie Burge, Ian Male and Rex Imrie really made an impression”. So did Brian, he coached the club for ten years and won four flags.

“The club was on the rise before I got there and we had a great home ground fortress which we used to advantage. Canberra sides hated crossing the border to meet the ‘tough country NSW boys’”, Quade recalls.

“There was a strong committee, lots of volunteers and a good supporter base” he added.

The Queanbeyan Australian Football Club founded in 1925 became a member of the ACT club competition which was formed a year earlier in 1924.

Queanbeyan has been derisively referred to as “Struggletown” by Canberrans over the years. It was immortalized in a song entitled “Struggle Town” by rock band The Choirboys as well as being the subject of academic papers at universities in Canberra.