Leading up to 1911, Australian football in Sydney was played on a number of grounds, unfortunately most were arenas which were not enclosed and accordingly football suffered from two major issues.

Some of the grounds used in this early period in Sydney football included: Moore Park (opposite the Bat & Ball Hotel), Redfern Park (now known as Redfern Oval), Birchgrove Oval, Hampden Oval (Trumper Park – then unenclosed) and many others.

Nothing highlights the then growing problem of grounds better than a letter published in the Sydney Morning Herald in May 1908 prior to a visit by South Australia’s leading football club, Norwood who were fresh from a victory over VFL premiers, Carlton in Melbourne.

At that early stage and prior to the visit, Norwood were scheduled to play their games as curtain raisers to major Rugby Union matches, at the SCG.

We have republished the letter which expresses a degree of concern that the SA premier club, which travelled “1000 miles – at their own expense” should be relegated to the inferior position of the early game before another code.

Nevertheless, the two Saturdays of 13 & 20 June, Norwood played at the SCG,were in fact played before major Rugby Union fixtures.  We have since 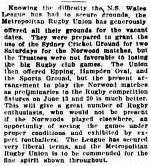 discovered that the Metropolitan Rugby Union, who had the winter lease of the SCG, offered the league use of the ground for the two dates but were over ruled by the SCG Trust who did not want to miss the opportunity of a major Rugby match at the ground where the rental was calculated on a percentage of the gate takings.  It is obvious that that Rugby matches drew a far greater crowd than a Norwood game could attract.

The third of the 1908 Norwood FC contests was played at the SCG on Wednesday 17 May as the major contest for the day with a Public Schools v Catholic Schools as the early game.  The attendance was described as ‘scanty’ which indicates a poor turnout for this midweek encounter.

Norwood left behind a shield valued at £40 ($80) for the Sydney premiers in the Sydney competition when they departed.  We wrote about it a few weeks ago and it is still on display at the league rooms at Moore Park.  The Reserve Bank has calculated this amount in today’s terms, with inflation, at $5,163.03

The question of grounds and particularly enclosed ones at the time, is a very interesting subject and should we get time may well be the subject of either a chapter in this year’s Society Journal or other publication.