Academic and long term supporter and football modernist, Doctor Rod Gillett joined the board of the Football History Society at their annual general meeting held today.

Gillett has had a long involvement with the game commencing as a lad at Kyabram, Victoria then later Armidale, Coffs Harbour, Sydney and Wagga.

In the 1980s a young Rodney Gillett was vice president of the NSW Football League and later one of the initial members when the Society was formed as a committee of the AFL NSW/ACT but moved on to progress his academic career with postings in Fiji, South Korea, Dubai and currently in Singapore.

He is retiring from work shortly and will settle in Sydney. Gillett is keen to focus on football jumping at the opportunity to re-ignite his interest in the history of the game.

In other moves, professional archivist Paul Macpherson was voted in as secretary while the incumbent, Heather White moved to the back bench: (the committee).

Ian Granland was returned as president and John Addison, treasurer. With the addition of Heather White, Ian Wright, Jenny Hancock, Mandy Keevil and Tom Mahon, take up the remainder of the committee positions.

Treasurer, John Addison announced an operating profit for the year of $2,218.00 but cautioned in his report that it is not the objective of the Society to hold surplus funds and outlined a series of spending projects the committee has agreed to for the coming months.

When the History Society was first engaged, it began as a ‘sub committee” to trace and record this history of football within the state, not only Sydney but in the entire state of NSW.

The committee evolved into the NSW Australian Football History Society, which has gone from strength to strength and now boasts a membership of over 90 people.

Initially the group was receiving and accepting material that could not be stored.  These boxes of items which include some great historical football stuff ended up in various peoples’ garages and in a number of cases their partners complained so it was eventually forwarded on to the State Library of NSW in Sydney.

When the Society gained rooms at the Western Suburbs Footy Club (Magpie Sports) at Croydon Park, and new material was started to be stored there in a systematic and arranged process, they still longed for the 40 odd boxes already at the State Library.  Unfortunately when you donate items to places like the State Library, you don’t get them back.

However following several years of negotiation the Society gained access to the material which sice has exploded into 92 boxes.

The president, Ian Granland, Vice President Paul Macpherson and Secretary, Heather White arranged a time and date to inspect these items at the library.

They were ushered into the Special Viewing Room at the Mitchell Library and after a robust identification procedure, spent the following six hours examining the pages, photographs and publications stored in these boxes.

After an exhausting period they came up with quite a number of boxes that they have suggested to the library that they would like copied which+, besides being stored could be posted on the Football History Society’s website.

These include several annual reports from the North Shore Club of which Society officials had no knowledge.

“We were thrilled to find these publications” Vice president Paul said.  “Of all the material we have, there is little from the North Shore Club and these items really fill a void.  We will go through them all and soon post them for all to see.

These will make a great special article for the website when they are copied, so stayed tuned.

Image show Paul Macpherson in deep thought while processing the various items provided by the Library. 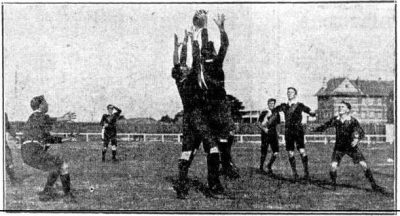 The Society’s first attempt at the publication of a journal has met with resounding acceptance by members.

The concept of this type of bulletin was floated following the lead of similar history groups which publish annual booklets, no so much on their day to day activities, but  of articles on the history of their organisation’s theme.

Committeeman, Paul Macpherson volunteered to compile  stories for the journal all of which were taken from the Society’s website articles posted in 2012.  He also came up with the title, Time On.  In addition to this Paul arranged the setting out, initial edit and booklet structure.

The 2013 Journal is an unpretentious 50 page document containing stories and photographs relating to a number of subjects including the start of football in Sydney, past seasons, organisation of the game in Sydney, grounds & personalities.

“This is our first attempt at a project of this nature” Society president, Ian Granland said.

“We intend to make it an annual publication available to all of our members.  Although it is a very interesting football booklet, we will not be selling it commercially.  It is restricted to members only, so if people want a copy they will have to join!”

“One thing we do want is for people to contribute their stories to our website for possible publication in the journal.  What was the line in that TV series, Naked City?  “There are eight million stories in the naked city; this has been one of them.”

The journal was posted out last week together with a copy of the Society’s latest newsletter.

Oh and by the way, the Australian Police Football Championships are being held at Picken Oval, Croydon Park this week on Monday, Wednesday and Friday.  Six states are involved.  Details of the times and matches are at this stage unknown, but we will keep you up to date as soon as the information comes in.

The Society will issue their latest newsletter next week after the final touches were added today.

“We had a bit of space that we needed to fill and couldn’t come up with anything of real interest to the members so it sat there for weeks” the Society’s news editor told us late this week.  “But we were fortunate to gain a couple of interesting enough fillers which allowed the document to go to our proof reader who gave it the green light, so it should be posted out shortly.”

The best part about the issue of the September newsletter will be the addition of the Society’s first annual journal.  This 50 page document has been put together by committeeman, Paul Macpherson and proof read by our sub editor who also gave this publication a tick, so its all systems go.

Memberships Officer, Jenny Hancock (pictured) said she expects both of these documents will be well received by the members.

“A fair bit of work has gone into putting them together and I for one am very pleased with the result” Jenny said.

“People will find the journal an absorbing read while the newsletter is full of worthwhile articles most of which are very relative to what members want to know.”

Both will be available to members only.

Jenny also reports that the numbers are quickly growing for the Newtown Football Club reunion.  Now only four weeks away officials are speculating whether they should put a limit on the number attending.

“This is another area in which I am involved” Jenny said.  “My former husband, Gordon, played with Newtown in the 1960s and I know many of those registering their participation on the day.  It should be a wonderful event and I want to appeal to all those coming along to bring any photos or other memorabilia they have for everyone to see.”