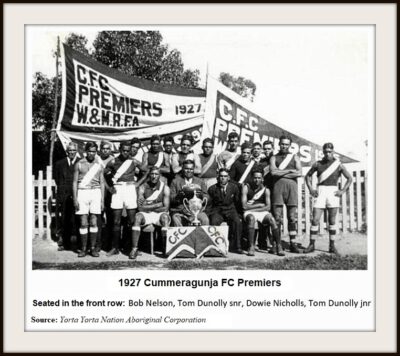 The search for the Greatest NSW Team unearthed a most distinguished Australian, Sir Doug Nicholls.

Sir Doug was born on 9 December 1906 and raised on the Cummeragunja aboriginal mission on the NSW side of the Murray River, near Echuca.

He began working life as a tar boy on the sheep stations in southern NSW. After moving to Melbourne to play football he became a council worker, boxer in Jimmy Sharman’s travelling boxing show, professional foot-runner, pastor, advocate for aboriginal advancement, and finally, Governor of South Australia (1976-77).

He was knighted in 1972 for “distinguished service to the advancement of aboriginal people. He had earlier been awarded an MBE (1957) and an OBE (1968). He was awarded the high honour of KCVO (Knight Commander of the Royal Victorian Order) by the Queen in Adelaide in 1977.

However, it was on the Cummeragunja mission oval that he learnt to play football according to Roy Hay, the author of the recently released ground-breaking book, Aboriginal People and Australian Football in the Nineteenth Century (2019).

Nicholls played his early football with the Cummeragunja mission team in the Western and Moira Riding district league based around Nathalia that was the forerunner to the Picola Football League. We are still trying to establish if he was member of the team that won the 1921 premiership.

Nicholls went to Melbourne in 1927 to try out for VFL club Carlton and played some reserve grade games. He famously left Carlton after a trainer refused to rub him down after training because of his skin colour according to his biographer Mavis Thorpe Clark, author of Pastor Doug: An Aboriginal Leader (1965).

He subsequently joined Northcote in the Victorian Football Association (VFA) where he became a regular member of the team. According to the AFL Record (27-29 May 2016), he starred in the 1929 win as well as the losing grand finals in 1930-31. He won the club’s best and fairest award in 1929-1930 and finished third in the Recorder Cup for the best and fairest in the VFA.

The Sporting Globe reported in 1929 that ‘he flashes through packs of big men, whisks around small men . . . and attempts marks at the back of any six-footer’. Nicholls was 5 ft 2 inches (158 cm) tall, but muscular and lightning fast. He was also a professional runner and won the Nyah and Warracknabeal Gifts in 1929

A further highlight of his VFA career was representing the Association in interstate matches in 1931 against NSW at the SCG and against the VFL at the MCG.

In 1932, Nicholls joined Fitzroy in the VFL and played alongside the great Hadyn Bunton, originally from Albury who was selected as first rover in the NSW Greatest Team. Bunton befriended Nicholls at Fitzroy and made him feel welcome, according to Mavis Thorpe Clark.

After Bunton was killed in a road accident in 1955, Pastor Doug officiated at his memorial service in Adelaide.

In 1934 he became the first aboriginal player to represent the VFL when they played the VFA. The following season he was selected for the tour to play against Western Australia and South Australia. He played in both Victoria’s wins over WA but missed the match against the SANFL due to injury.

Nicholls returned to Northcote in 1937 but ongoing knee injuries forced him to retire in 1939.

However, he did return to home to Cummeragunja for one last game in 1940 for a fund-raising game against Echuca at the Victoria Park Oval in Echuca.

Nicholls also returned to Northcote as non-playing coach in 1947. He is believed to be the first aboriginal person to coach a senior football club. Another example of him pushing the boundaries for his people.

Sir Doug expressed his passion for the game of football in an article in the Sporting Globe (1 June 1935):

“I get a tremendous kick out of football, because I know my people in New South Wales follow my doings and play closely by wireless and in the newspapers. This always spurs me on, and gives me added confidence”.

The ultimate football tribute for Sir Doug Nicholls has been the naming of the AFL’s Indigenous Round in his honour.