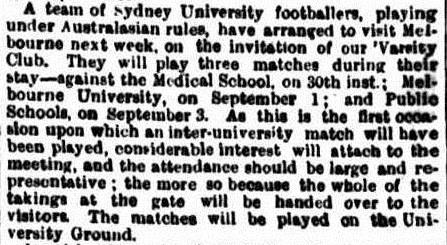 Intervarsity sport but more particularly intervarsity (Australian) football has been a feature of university life for many years now.

It’s when students from most universities throughout Australia converge on a particular venue and play each other in various sports.  And as university students do, “they have a good time.

We have located what we believe is the first match between Melbourne and Sydney Universities played in Melbourne.  Articles in both the Argus and Australasian Newspapers of the day state that the contests” were the first intervarsity football matches played.”

In 1888 a club playing under the name ˜University” was formed in Sydney on 7 July.  Although they played three matches, the number of members was small and to a degree very much dependent on the assistance given by the Sydney, East Sydney, Waratah and West Sydney Clubs (for players).  The suggestion of playing Melbourne University was first mentioned in mid-1888.  That year the club finished the year with a satisfactory balance sheet and had as their patron the NSW Governor, and the club president, the University’s Chancellor, Sir William Manning whilst the vice-chancellor was elected vice president.  Mr M M Ryan was elected secretary and J. Davis the treasurer.  The captain was T. Challands and vice-captain G P Evans.  The club’s committee was comprised of Messrs J Leahy, T. Kidston, Edwards, Norris and J. Gordon.  W J W Richardson was the club’s delegate to the Association.

It should be noted that the position of president in clubs of those days was simply titular and more than likely all the university sporting clubs of the period would have had the chancellor and vice chancellor recorded in some official role.

This University football club nearly always struggled for numbers and in their match v West Sydney on Moore Park on 1 July only 13 turned up to play.   One Sydney newspaper said the team was wasting their time.

Final arrangements had been made by the University Football Club under Australian rules to play a number of matches in Melbourne in the latter half of August, 1888.  Obviously in an effort to supplement their numbers, St Ignatius College were asked to permit some of their students to accompany the side but “this kind offer” was declined.

A selection committee had to choose from thirty the three players who nominated to travel to Melbourne.  Not all were students, many were players from other Sydney clubs however the following were chosen:

The matches the team participated in included:

Note: Behinds were not counted in the total score in those days.