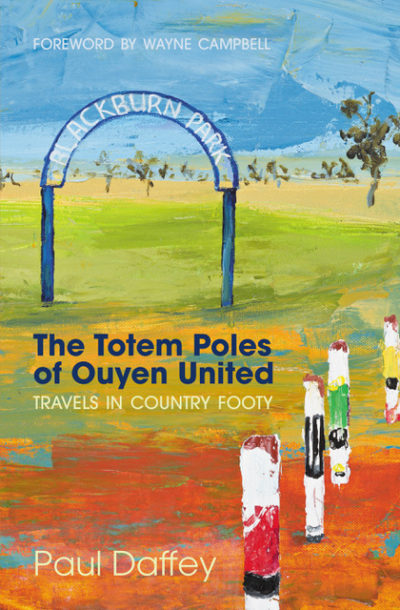 As Paul Daffey demonstrates in his latest book on country football, The Totem Poles of Ouyen United: Travels in Country Footy, that sadly, the number of football clubs in country areas are declining, but this is not a recent phenomenon but an on-going process that started with the Great Depression of the 1930s.

The recurring theme in Daffey’s book is that the demographics determine the continuity and sustainability of football in a small town or district, and a diminishing population, particularly of the youth, leads to the decline of active football clubs and either their amalgamation with neighbouring clubs or extinction.

As Daffey show most clubs choose to “bury the hatchet” with a fierce local rival and agree on a new name, new colours, and where the new entity will play its games. This is perfectly illustrated in his case study of footy in the Mallee. In a stunning example Daffey’s research shows that thirty-two football clubs have folded into the Ouyen United Football Club.

The same scene is being played out in the southern region of New South Wales in the farming districts where the Australian game has been pre-eminent for more than a century.

The most merged club is Coreen Daysdale Hopefield Buraja United (CDHBU) that was formed on the eve of the demise of the Coreen and District Football League after ninety-nine years of existence in 2007. CDHBU and the remaining Coreen league clubs then went to play the next season in the neighbouring Hume Football League.

All had started as individual clubs but Hopefield and Burraja had merged as early as 1950 while fierce rivals Coreen and Daysdale came together in 1995, but the continuing difficulties to field teams led to the amalgamation of both these clubs in 2006.

CDHBU won the last ever premiership in the Coreen league when they beat the Billabong Crows (a merger of Urana and Oaklands in 2004). Ironically, this meant that six of the foundation clubs of the competition, albeit in merged entities, played in the last-ever game in 2007.

The Mallee is much more than a name of a region, like the Riverina it’s locality and characteristics are captured in the Australian psychic. It conjures up images of red soil, blue sky, blazing sunsets, and a dry, arid landscape. “It is a tough place, demanding sweat and toil” (p.35). And so are its people and this is encapsulated in their footballers and their football grounds.

The boundaries for the Mallee set by the Victorian colonial government in 1883 was “all unalienated crown land in the north-western district wholly or partly covered with the Mallee plant” (Pickard, 2019). And just as Henry Lawson proclaimed that everyone knew where the Riverina was, so do country folk know where the Mallee is, and where its roots are.

In order to pay homage to the antecedent football clubs of the Ouyen United Football Club the Year 9 students at the Ouyen P-12 College in 2009 decided to paint totem poles that had been erected at the entrance to the club’s home ground, Blackburn Park. The students painted nine poles in the colours of the clubs that had folded into one another over the years to form Ouyen United.

The totem poles provided the inspiration for the title to Daffey’s book and also the stunning cover designed by Megan Ellis based on a painting by Swan Hill dentist John Harrison.

Paul Daffey stated at the outset that the main purpose of the book was to focus on football in the Mallee in order to provide a snapshoot of footy in the country. What is occurring in the Mallee is being replicated in country areas all around Australia but his story reveals that has been on-going for decades in line with the rural-urban drift.

The book also includes chapters about Daffey’s travels in country footy taking in Wedderburn in the North Central League, the old gold-mining town of Inglewood, Boolara in the Strzelecki Ranges in Gippsland, Horsham in the Wimmera and the Mornington Penisula. The chapter on the Pines v Sorrento grand final is highly captivating and the match report exhibits Daffey’s exquisite writing skills and social insights into the game.

The Appendices are most comprehensive and in addition to detailing all the statistical history of football in the Mallee there is a review of the season for country leagues in Victoria and southern NSW.

An added feature is a list of all the players that have played in six or more premierships since WW II. Brad Hartigan, who has played an “unfeasible” number of premierships – twelve for the Horsham Demons in the Wimmera Football League – is the subject of the final chapter.

As Daffey says in the opening chapter he has a penchant for writing about local footy – amateur football, suburban football, but the best stories are in the country.

To buy a copy of the book email  pauldaffey27@gmail.com with your address and he’ll email the bank details.  Books are $30 per book plus $10 postage.