1929 Rolled around just like another season in Australian Football in Sydney but there were a few changes and surprises.

St George was admitted to the first grade competition and this was despite two clubs voting against their admission.  The previous year they had participated in the reserve grade and a few years previous also had one or two seasons in the seconds.  Their driving force was their president a Rockdale bank manager, Andrew Glass.

The League secured a six year lease of Erskineville Oval at £500 per annum ($37,628 in today’s money).  In the agreement, £100 had to be spent on improvements each year during that period to the oval.

Because the Rugby Union pushed the bid, the league had to pay £200 for the use of Trumper Park in 1929, and extra £40 more than in the previous year.

A new ground was introduced to the League in Kensington Oval.  This was built over a sandy waste through which a stream led from the ponds in Centennial Park to the Botany Swamps (funny how the name of the water repositories change as the standing of the suburb then was much lower in the pecking order).  The controlling body paid £60 pounds to Randwick Council for its use.  St Lukes Oval, Burwood and North Sydney Oval were two which were also used in the competition that year.

Alexandria Park and Marrickville Oval though, were both lost to Rugby League.

The League continued with the same admission fee to the grounds at one shilling to the outer and one and six pence to the grandstand ($3.76 & $5.64 today).  They also sold season tickets which purchasers could buy at twelve shillings and sixpence ($47.00 today).

Only after one year at the helm, S H Donnelly stood down as League president with the position going to solicitor and WWI veteran, Aub Provan, formerly a player with the Newtown Club.  H Gordon Harris, another Tasmanian, replaced L W Percy as League secretary.

The season was opened with a two team interstate Railways Carnival, South Australia and New South Wales.  Their solitary game was won by the latter.

Searching through Sydney newspaper we came across the following article in a 1922 issue.

It had to do with the allocation of grounds and the author didn’t spare any ‘beg your pardons’ in his appraisal of the situation:

“There is one thing vexing the New South Wales League, that is, the question, are Australians foreigners? This Question is prompted by the grossly unfair treatment accorded the New South Wales League by the Marrickville, Hurstville and Ashfield Municipal Councils, who “dressed in a little brief of authority cut such fantastic tricks before high Heaven as make the angels weep”.

The cause of the kick is this: It is usual, prior to the opening of the Winter season for all Councils controlling grounds to advertise in the daily press calling tenders for the leasing of their grounds for Winter Sports.

The Australian Rules League of New South Wales tendered £150 for Marrickville Oval. The Rugby League’s tender for same was £135. The latter was accepted. Why in the name of heaven was £15 thus thrown away by the little Puddlington of Marrickville the ratepayers should want to know. Not only this, why should the Australians be boycotted when they were prepared to pay cash in advance? Will the other body do the same? What strings were pulled to influence the decision of the tender?   It is British fair play which we hear so much about, or are Hun methods still running the Marrickville Municipality?

At Hurstville something similar was enacted. The “Aussies” tendered £25 for Penshurst Park. The wise men of Hurstville evidently did not require money to put their streets and parks in order, the ratepayers can find the brass for those purposes. The Rugby League tender for exactly half that amount was accepted. It looks like more boodling, what! The City Council Tammany Ring was not a circumstance to it.

At Ashfield, tenders were called for Pratten Park. Australians bid £200, Rugby £155. Again Rugby scooped the pool, but under somewhat different circumstances.   The Ashfield Council in their wisdom decided that tenders were not high enough. Fresh tenders were invited. Australian League bid £250, but still Rugby secured the bacon. How do they do it? Surely there are enough fair-minded patriots and sports in these particular suburbs to see that justice is done. The Dinkum Aussie only asks a fair deal without fear or favour, not only for Australian football but for all and any other winter sport; and they protest against one body securing the whole of the playing spaces in and around Sydney to the detriment of all other sports. If such practices continue there is only one course  to pursue, for all the other sporting bodies to combine and secure grounds which they may share on an equitable basis.

At present the League, which happens for the moment to be top dog, secures all the bone, but may find that a united attack by the smaller tribe may deprive it of the spoil. Remember the adage of the dog and the shadow, where he tried to collar too much and lost all – moral, don’t be too greedy.”

All this came hot on the heels of the NSW Australian Football League successfully tendering for North Sydney Oval in 1921.

Their offer of five hundred pounds (an unbelievable $37,500 in today’s money) plus 20% of the gate for the winter lease of North Sydney Oval was accepted.  The offer tipped out the long term Rugby League tenants, North Sydney Rugby League club, who offered one hundred pounds plus 10% of the gate.  The AFL’s offer, considering the limited crowds the game attracted then, (but 1000 times more than now) could be viewed as quite farcical.

One of the great issues of the period was the number of enclosed grounds in Sydney, unlike Melbourne, there were not that many and it was an annual challenge between Rugby Union, Rugby League, Soccer and Australian Football as to who got what ground.  Of course Rugby League were successful in most although Australian Football only required three grounds per weekend.

In 1922 the Australian game only ended up with two enclosed grounds, Erskineville Oval and Trumper Park.  They had to play their other games on open parks like Alexandria Oval, Moore Park and North Sydney Oval No. 2, now St Leonards Park.  There was no football played on Sundays in those days. 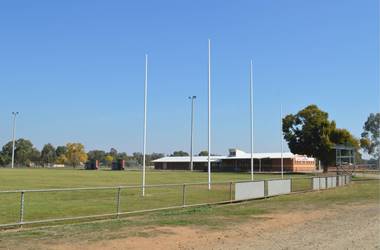 For Western Suburbs, premierships of late have been few and far between.

For this once strong and well managed club where players flocked when they came to Sydney, this year’s flag in the Division II Under 19 grade is the first premiership in the club since 1996, when former Sydney Swans General Manager, Ron Thomas, took them to their only first grade flag for 19 years.

A Western Suburbs club first competed in the Sydney competition between 1926-29 playing out of Marrickville Oval but they petered out when the St George club emerged to take their place.  Or rather the idea that Wests amalgamated with the new St George club was promoted.

Then, along with Balmain and Sydney University, Wests became the third new club to be admitted to the Sydney competition in 1948 when the game was riding on a high following WWII.

The club was always well managed and accordingly attracted some talented and very capable players.  Concord Oval was their home ground for many years until in the late 1950s they settled on their current ground, Picken Oval, then owned by trotting magnate, Billy Picken.

Picken helped the club in many ways but it was through careful and a well organised administration that saw them granted a liquor licence in 1961.  This was in a period when social groups of all persuasion gained licences which gave them access to the almost unregulated poker machine scene of the time.

Bulging with money and people, they were able to appoint some highly talented coaches as well as players.  At the same time the club also sponsored the league in their endeavours to purchase their own premises in Chippendale, Sydney.

Quite often then they figured in the match of the day at Trumper Park of a Sunday where some very large crowds congregated to watch their clashes against Easts, Newtown and St George.

Of late though the club has had a lean run, despite good administration where they have almost achieved premierships in various grades, this flag by their gallant Under 19 side on Saturday will be savoured by those club members who followed the Sydney Magpies through thick and thin.