Playing football or any sport for that matter on the weekend is just a given these days, but that wasn’t always the case.

Prior to this most of Australia’s workers laboured on Saturday Morning which in turn impacted on football:
• Games started later on Saturday afternoons. In Sydney, senior matches commenced at 3:00pm while the reserve grade started at 1:30pm, normally with limited quarters and no time on. Rugby League started their games at 3:15pm and Rugby Union 3:20pm.

• The development of junior football was restricted because of the needs of adults to work on Saturday Mornings. In some areas this led to Sunday Morning football. Most, but not all junior football was left to schools. There was however the Metropolitan Australian National Football Association which was like a Second Division in Sydney, supporting at times, grades as low as Under 16s.

• Many senior games in the country were played of a Sunday but in a number of cases this incurred the wrath of the church and many politicians. Some country councils would not allow any sport at all on Sunday so this then restricted the limits of football competitions, particularly in the country, where time would not permit distant travel to an opposition town to play.

When senior sport attempted to play or apply for use of grounds in Sydney on Sunday in the late 1930s they were met with attitudes like this from the Town Clerk (General Manager) of the Randwick Council: “that Sabbatarianism and muddied oafs is a blend that may not be quaffed on grounds under his council’s control.”

But this wasn’t the stance in all parts of NSW. Sunday games had been played on and off in Broken Hill since the early part of the 20th century but it wasn’t until 1939 that a Sunday Football League was established.

In June 1919 the Temora Rugby League Club presented a petition signed by 600 inhabitants of the town requesting that the resolution to ban the use of the Recreation Ground for football on Sundays be lifted. It was not successful so in September of the same year, Temora chose to play Junee on a private piece of land in the town.

By 1920 Rugby League in Junee area was being regularly played of a Sunday,  but perhaps not in all parts of the Riverina.

By December 1936 Bathurst remained the only town in the Central West where Sunday football was not sanctioned however by 1937 ‘the extension of Sunday football in country areas ’had pretty much crept throughout the rugby league community.

The South West District (Australian) Football League in the Riverina was reformed just before WWII and they began to play of a Sunday, which proved exceptionally popular. The league was comprised of clubs moving from other competitions.

With Sydney though it would appear the matter was a very vexed question when the Australian Football body considered playing games on a Sunday in early 1938.

Newtown FC secretary, Les Blackmore said “Sunday football has never been officially discussed by our club and until it comes before my committee, nobody can assert that we are ln favour of the proposal. There might have been some unofficial talks on the subject, and, from what I can gather, opinions are about equally divided. Personally, I am against, the Idea.”

Why did Sydney football administrators consider moving to Sunday?

Ostensibly they said it was because of a lack of three grounds where an entry fee could be charged. So one way or the other, it was all about money.

At the adjourned 1938 annual meeting of the New South Wales Australian National Football League, Mr. J. McKeown, president of the Sydney club, moved a motion that the competition matches should be divided, two games to be played on Saturdays and one game on the Sunday. It was resolved to refer a decision to the individual clubs for an expression of opinion.

Mr. McKeown said that, “for many reasons, Saturday football was not revenue producing, and the trend now was wholly in favour of Sunday football. Owing to the Housing Board having taken charge of Erskineville Park, the approaches were in such a bad state that people would not visit the oval, and if Erskineville Oval could not pay, as it had always done, for the other grounds, the results at the end of the season would not be as good as they had been in the past.”

[Note: This was when the old Erskineville Oval was being demolished and moved to its present location.  The ground in this year was playable but the venue was not attractive.]

Bruce O’Grady, the Sydney Club secretary said “Erskineville Oval gets a big crowd on Saturday, because the best game is staged there. Trumper Park is not as good while Kensington Oval is useless, we are lucky if we get 50 shillings at Kensington but if we can get £50 out of the ‘gate’ on a Sunday at Trumper we will be satisfied.”

In what can only be described as a weak move, instead of making the decision themselves, the N.S.W. Australian National Football League decided to ask the clubs to ascertain the views of players and to report back to the League by April 4, 1938.

At a subsequent meeting of the N.S.W. National Football League the introduction of Sunday football in Sydney was soundly defeated by an overwhelming majority .  Strangely, the decision followed a vote by the players, of whom 73 were against and 29 in favour. The South Sydney Club was the only club to support the scheme. Following this vote, the chairman, Mr. W. H. Fitt, said that “it would have been impossible to carry out the idea, owing the lack of grounds. ”We canvassed all councils for a ground without success.”

By 1943 however it was all different. The League president, Mr N P Joseph announced that “with the admission of an R.A.A.F. team into the competition, (virtually replacing North Shore FC which withdrew during WWII) it would be necessary to play one match each Sunday. A shortage of playing area would not allow of three games being played on Saturday.”  And so we ask, “What changed?”

And boy did it improve the gate takings.

Of course there is more to the story which we shall go into in a later story. Below is the graph of gate takings at Sydney football between 1930-60. 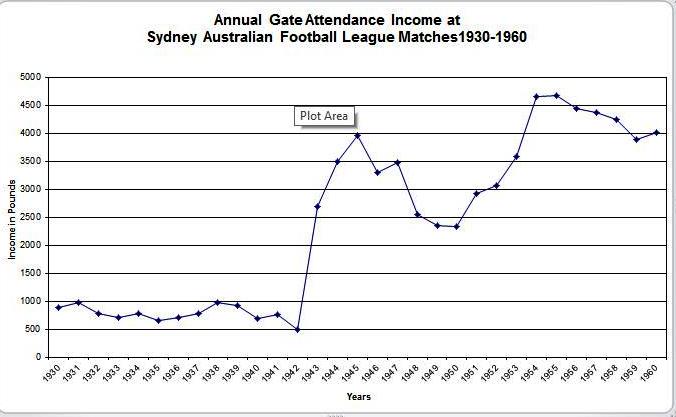