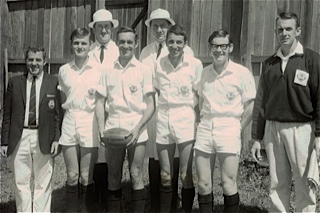 A chance mention by school teacher, Paul McSweeney, about Australian football and umpiring led to one of his young students, Rachel, to mention that her Pop was an umpire.

“Malcolm?” then after a slight pause, “Not Mal Lee” Paul questioned.  “Yes, thats him.”

Paul told his father which led to a gathering of 1960s Sydney umpires at the Carringbah home of Mal Lee’s son just before Christmas 2014.

Mal Lee was known to many in Sydney football circles during the 1960s and early 70s.

He came to Sydney from Yarraville in the late 1950s and because he lived at Rosebery, turned out with the South Sydney Club.  However the then slightly built Lee found it all a bit daunting and still wanting an involvement in the game, signed up to umpiring.

He started in the seconds and on the boundary for firsts but slowly began to make himself a name.

A straight talker with an open mind became one of the best umpires in the history of football to grace Sydney grounds.

After this Mal moved away from Sydney and lost contact with his friends and peers.

His standout involvement led to him being inducted into the NSW Umpires’ Australian Football Hall of Fame in 2001.  Unfortunately the honour could not be bestowed on him personally because his whereabouts were unknown.

Jim McSweeney realised this anomaly and after making contact with Mal and knowing he was to be in Sydney, made arrangements for the plaque to be presented to him at his Christmas visit to his family.

Jim also arranged for several of his old colleagues to be present at the informal ceremony, including Len Palmer, Bill Allen, Chris Huon, Grahm Allomes, Jeff Dempsey and ? .  Their attendance was a surprise.

They are all photographed here with Mal holding his award.

Unfortunately Jim could not join then after being rushed to hospital for a triple by-pass.  He is recovering well.

While in Sydney and out of the blue, he and his family paid a visit to the Society’s Rooms at Wests Magpies Club.  Fortunately it was on a Tuesday, the day that some members of the committee gather at the club for their working bees.

He was shown various items relating the the period in which he was involved, particularly with regards to umpiring.  He was able to identify several personnel from the umpiring fraternity in the numerous photographs the Society have in their collection. Also, Mal offered several items of memorabilia he has in his possession which relate to his time in Sydney and state football.  During his visit he took out a 3 year membership subscription with the Society

We managed to locate and add the names to this 1975 photo.

These boys went well but remarkably were defeated by the ACT in the first game. The loss however, did not dampen the end result. The side won the Teale Cup competition that year. They were well coached and performed creditably

The results of the games are also attached to the image.