For much of the last 40 years former Swans and Bulldogs defender Neil Cordy has been in the media box at the SCG to witness the careers of three of the game’s greatest players on the famous ground that has hosted Australian football for 140 years.
Here, he presents their story.

But the big three stand apart.

Size and power are their common denominator but they’ve all bought something different to the table.

Plugger was a goal scoring beast who kept the scoreboard ticking over like no player before him or since. He would physically and mentally intimidate opponents, win the ball and kick for goal with unerring accuracy.

Goodsey was poetry in motion, a super athlete who became a super footballer. In the early days he was admired for the beauty of his play, in the end he drew equal applause for his toughness and durability.

Buddy is different again. At 34 he still electrifies the crowd like nobody else in the game.

The patch of turf in front of the SCG’s Members and Ladies Stands is his favourite place. In the summer cricketers raise their bats there, in the winter its Buddy’s playground.

TONY LOCKETT
Tony Lockett’s 1995 arrival in Sydney from St Kilda was a game changer for both parties. 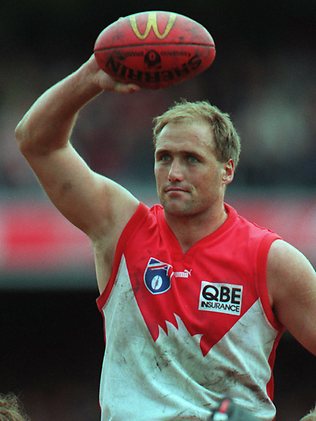 Sydney were rock bottom, financially and on the playing field. Plugger was in a slump as well as he struggled with injury in 1993 and 1994. His success in red and white was instant, kicking 110 goals for the year and leading Sydney to eight wins.

But the best was still to come.

In 1996 Rodney Eade arrived as coach taking the Swans to their first finals series since 1987. Lockett brought up the ton again in round 19 against Richmond at the SCG kicking 12. He missed the qualifying final win over Hawthorn with a groin complaint. Two weeks later he was back in for the Preliminary final against Essendon. It was a thriller. Still struggling with injury Plugger kicked just one goal for the game and barely left the goal square. With the scores tied and the final seconds ticking down he marked on the 50 metre arc. His kick after the siren went through for a point putting Sydney into their first grand final since 1945 and sent the SCG rocking like never before.

It was just one of many magic moments the champion spearhead shared with the SCG faithful.

ADAM GOODES
Adam Goodes selection at pick 43 of the 1997 draft remains one of the great bargains in footy history.

Growing up he loved playing soccer and came to Aussie Rules later than most. After a slow start playing all of 1998 in the reserves he sprouted wings the following year winning the AFL’s Rising Star Award. There was no turning back from there. 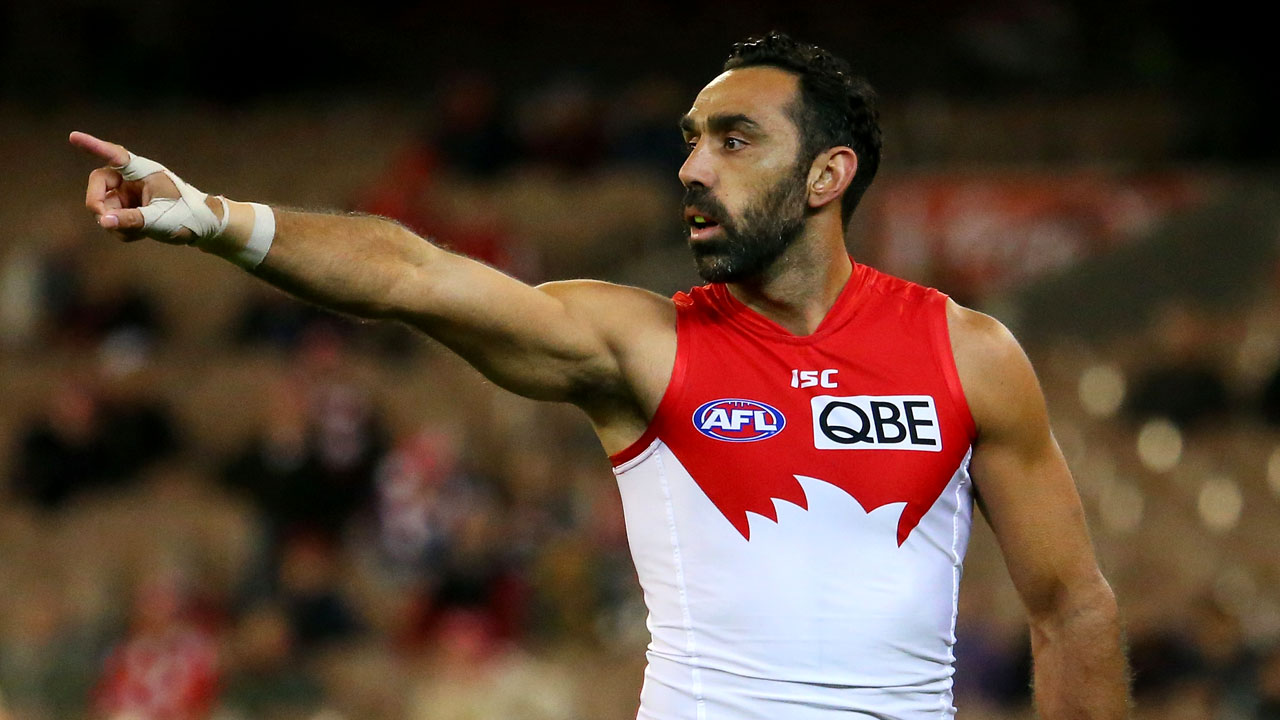 Four years later (2003) he won the first of his two Brownlow Medals playing mostly in the ruck and in 2005 played a vital role in the Swans drought breaking grand final win over the West Coast Eagles.

During the year he was also awarded life membership for the Swans after playing 150 games.

The milestone along with a flag, All Australian honours and a Brownlow was more than most players dreamt of but Adam was barely getting started.

Playing in the midfield his second Brownlow came the following year and a brilliant display in the grand final against the Eagles almost landed back to back premierships. West Coast scraping home by a point.

Over the following years Goodes durability became legendary as he played 191 games straight to the end of 2007. In round four 2012 he overtook his great mate Michael O’Loughlin to become Sydney’s games record holder on 304. His finest moment would come later that year on the biggest stage with an effort of enormous courage.

Adam’s form in grand finals had been strong in 2005 and 2006 but a second quarter knee injury in the 2012 decider threatened to ruin Sydney’s hopes. It was a torn posterior cruciate ligament in his left knee but Goodes refused to go off the ground.

If he was substituted the Swans would be down a rotation with 3 quarters to play and almost certain to lose. Playing with his knee heavily strapped an unable turn left or right he had a hand in two second quarter goals and kicked a critical last quarter major to help his team get home. 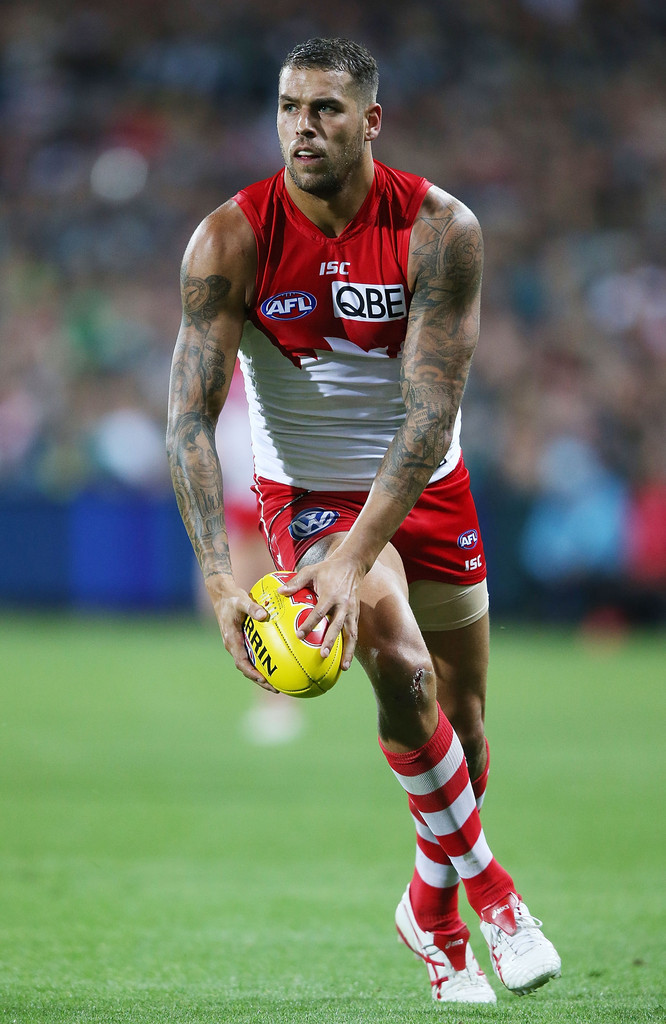 20 years after Tony Lockett’s arrival at the SCG Lance Franklin made an even bigger splash.

He was expected by most people to be heading to GWS but when Buddy signed a nine year $10 million with the Swans the footy world was rocked. The deal came with enormous expectations and the former Hawk lived up to them and delivered even more.

By year’s end he had his third Coleman Medal, finished second in the Brownlow medal and claimed his fifth All Australian selection.

Buddy’s round 13 outing against Port Adelaide became an instant classic. With Port finishing strongly Buddy booted the Swans last five goals of the match to hold them out. His last two goals were both candidates for goal of the year, one from 70 metres out and the other beating a quartet of opposition defenders.

The Swans lost the grand final to Hawthorn but it wasn’t Franklin’s fault as he kicked four goals from limited opportunities.

Injury has hampered his recent years in red and white but Sydney’s fans have been treated to a lifetime worth of goals and entertainment.

His round 22 effort in 2017 was another memorable outing at the SCG. Trailing Coleman medal leader Josh Kennedy by five goals Franklin kicked 10 against Carlton to beat him by four. It also continued his run of winning the medal every three years.

Sydney fans have also had the pleasure of watching their hero climb the ladder of all time goal kickers from 35th to sixth. He is now closing in on the 1,000 goal mark not achieved since Gary Ablett Snr. in 1996.

By good luck or good management every milestone match from 200 to 300 has been played at the SCG. If he can hold out till next year his 1000th could be there as well.