The “Moama Kid”, Fremantle’s dynamic forward Lachie Schultz scored the maximum number of votes for his outstanding game in the 55-point win over the West Coast Eagles in round 3.

He also won the Glendinning-Allan medal for best afield in the Western Derby.

Schultz’s performance has catapulted him into second place behind early leader Isaac Heeney (Sydney Swans) in the Carey Bunton medal for the best NSW player in the AFL.

Near neighbour Todd Marshall from 70 kilometres up the Cobb Highway in Deniliquin also had a break-out game, booting five goals in Port Adelaide’s after-the-siren loss to Adelaide in the Showdown.

Mangoplah-CUE’s Elliot Himmelberg also had a stand-out performance for his side Adelaide booting four goals and scoring six votes in the win over Port Adelaide at the Adelaide Oval.

Swans star forward Isaac Heeney still leads way in the Mohr Medal for the leading NSW goalkicker by one goal from Tom Hawkins and Harry Himmelberg.

Dynamic Swans forward Isaac Heeney topped off an outstanding game against Geelong at the SCG in round 2 of the AFL season with a maximum score of 10 votes.

Heeney now has 15 votes for the season and leads the Carey Bunton Medal and is also running equal fourth in the AFL CA Champion Player of the Year award behind joint leaders Patrick Cripps (Carlton) and Christian Petracca (Melbourne) on 20 votes.

Meanwhile, his team-mate and fellow academic product Callum Mills scored 8 votes for his performance against Geelong.

The winner of the NSW Player of the Year award each year receives the Carey-Bunton Medal that honours the two greatest NSW players of all time, Wayne Carey and Hadyn Bunton based on the votes cast by the AFL coaches.

The votes of the AFL Coaches Association voting system is based on a 5,4,3,2,1 basis after each home and away game and the votes are aggregated.

Heeney also leads the Mohr Medal for the leading goalkicker from NSW in the AFL. By booting 5 goals against the Cats, he now has a total of eight so far this season.

Geelong’s Coleman medal winner could only land one goal against the Swans.

The leading goalkickers after round two are: 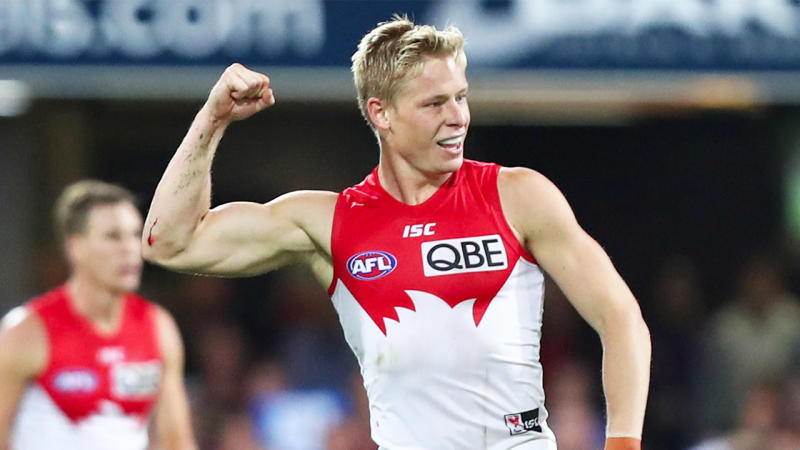 Sydney Swans’ mid-fielder Isaac Heeney has made a giant leap into contention for this year’s Carey Bunton Medal for the best player from NSW in the AFL based on the votes for the AFL Coaches Association Award.

The former Cardiff player scored ten votes for his brilliant performance in the Swans’ demolition of the Fremantle Dockers at Metricon Stadium on the Gold Coast last Sunday.

Heeney is now on thirty-seven votes, but is now within reach of leader Jacob Hopper (GWS Giants), who has accumulated 48 votes so far this season, and Adelaide key forward Taylor Walker is now only one vote in front of Heeney.