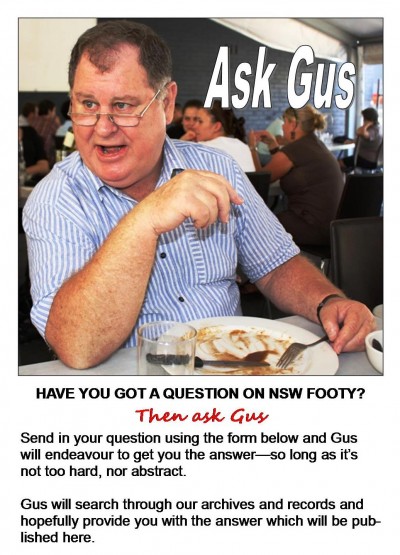 A long term member of our committee, Gus McKernan has died.

He suffered for the past six months from pancreatic cancer and finally succumbed to this dastardly ailment today, Friday 23 February 2018;  he was 73.

Born and raised in Euroa, Victoria he played footy for the local side and of course fell in love with the game.

Unfortunately he did not finish his course and moved to Sydney where he took on an appointment with the Commonwealth Bank at Windsor.  This led to moves in his job and while he played rugby league at Windsor in 1965 he pulled on the boots for St George, mostly in reserve grade.  Gus later became an outstanding insurance agent and in fact advertised his business in the Sydney Football

Later he moved to the north west of Sydney and got himself involved in the burgeoning Pennant Hills club and never left.

He was an absolute dyed in the woods Penno supporter and of the Sydney Football League.  He often boasted that he attended every Sydney grand final from 1967 and also the last 42 Phelan Medal nights, apart from 2017 (which in fact turned out to be a great night) because he was disappointed with the direction Sydney football had taken.  Womens’ football was not his favourite subject but nevertheless he was one of footy’s great supporters.  Always at a VFL/AFL grand final and a member of the Sydney Swans since their move to Sydney in 1982, he was true blue footy.

At one stage we even had a segment on the website named after him: “Ask Gus” and boy did it create some controversy.  You can see him in the attached pic.

Gus was not one to come to our Croydon Park rooms to work, more to talk and read any of the new material that had arrived, so we gave him that job: ‘chief reader’.  I don’t know if that worked but he took on the job as treasurer for a couple of years and loved overseeing the Bunnings Bar-B-Qs the Society held, they were always of course not to conflict with his attendance at Wednesdays Races.  He was a member of the Hawkesbury Race Club and a perennial attender at the Grafton Cup.

We have lost another good bloke;  someone who enjoyed life and loved footy.  Rest in peace Gus.