Football History Society Vice President, Doctor Rod Gillett, takes us back to one of the champions of the game in the Riverina Area of New South Wales: 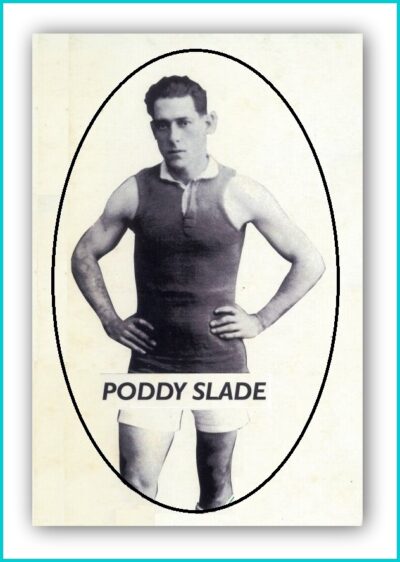 Coolamon’s greatest-ever player Alonza “Poddy” Slade, was rated a “wonder” player because of his “skills and sheer brilliance” according to contemporary media reports.

The most astounding story in relation to Poddy Slade is when he beat the South West Mail train from Coolamon to Matong, almost thirty kilometres, riding a bicycle!

Football teams in the South West league in the 1920s would travel by train to games along the south-west rail line from Junee to Griffith, alternating venues based on the fixtures. All the clubs except Leeton in this period were based on the rail-line that gave the league its name.

One particular Saturday, Coolamon were playing at Whitton, and Poddy missed catching the train by a few minutes due to being delayed at work; undeterred he went after the train on his bike, a cumbersome old Malvern Star, and furiously pedalled over the unpaved road to Ganmain, only to see the train depart the station just as he rounded the corner. He redoubled his efforts and caught the train in Matong. That afternoon he was Coolamon’s best player!

Poddy Slade played his first game for Coolamon in 1908 at the age of 14. He subsequently played until 1934.

The photograph(above) of Poddy Slade in his football prime shows a superbly muscled, powerful frame with a face set in steely determination. He worked for the local granary on tasks that required physical strength such as lumping bags of wheat.

In an interview I did with him in 1981 he told me that he also worked at his fitness by jogging at night along the then bumpy Coolamon-Marrar road.

Coolamon defeated Naranderra at Coolamon by thirteen points. A crowd estimated at over 3000 attended the match and the gate takings were a record £78. A half-day holiday was declared in the town for the game.

Narrandera had challenged for the premiership after being declared the winner of the semi-final against Marrar at Grong Grong. This followed the controversial “football stabbing” incident by an unknown Marrar player.

Best player for Coolamon was Poddy Slade – “ … with his high marks and general play was always in the limelight” (Coolamon-Farmers’ Review, 24 September, 1920).

Coolamon secured their second premiership in three years when they took out the 1922 pennant by beating Narrandera at Coolamon. Poddy Slade was again named the best player.

The highlight of his extensive football career was leading a combined South West team against VFL powerhouse Collingwood at Narrandera in 1924.

The Magpies were led by Charlie Tyson and included Charlie Dibbs, Len Murphy, Joe Poulter and the Coventry brothers, Syd and Gordon. Known as “The Machine” Collinwood would win four premierships in a row, 1927-1930.

According to the match report, “Slade was one of the few to match these leaping wonders” and “used his height and weight judiciously”. He was named in the best players and kicked two goals.

Poddy played for Coolamon until 1934 when his last game was the final game for the season against fierce local rivals Ganmain. Ganmain won 7-21 (63) to 5-9 (39). Poddy kicked three goals.

As to how Alonza Slade got his nickname the answer was given to me  by Mrs Slade at my interview with Poddy in 1981, his wife told me, “When his mother bought him home a relative exclaimed “My isn’t he a little poddy” and the name stuck.

Society officials unearthed a plethora of material today dating back to 1935 mostly relating to the Newcastle Football League.  The photos show the president, Ian Granland working with Mrs Lyn Arnold to load the vehicle.

The documents were donated to the Society by the wife of a former long term official of the league, Jim Arnold, since deceased, which had  been gathering dust in her garage for a number of years.

This is a significant find for the Society with most of the collection meticulously filed and catalogued revealing a detailed history of NSW country football, most particularly in Newcastle.

Included in the boxes of objects is a Football Record, cost three pence (3 cents), of an exhibition game at Newcastle Sports Ground between South Melbourne and Collingwood in 1935 when South boasted players like Nash, Bissett and Pratt while the Magpies team included the Collier brothers, Gordon Coventry, Jack Regan and Keith Stackpole, father of the famous former Australian cricketer.

Collingwood won the match 11.10 (76) to 10.13 (73) in what was described as a desperate and highly skilled encounter.  The game was played on a Wednesday before an attendance of 2,000 with a further match between the two scheduled for the following Saturday on the SCG.

There are a myriad of photographs in Mr Arnold’s collection together with newspaper cuttings and Newcastle (National) Football League annual reports also dating back to 1935.  In this year and for a number of seasons for the most part, prior to 1948, there was only one or two teams in Newcastle.  These played either inter or intra-club games, matches against visiting Sydney clubs as well as in that particular year, the VFL exhibition match.

Some of the photographs are titled but many are not and officials have already made an approach to a former leading Newcastle AFL Official, Chris Arnold (no relation) to offer suggestions as to the identity of the images.

Interestingly, Mr Arnold kept two photo-lithographic blocks featuring footballers.  Wooden blocks with a zinc face featuring the image, were universally used in a process to produce photographs in the printing trade up until the late seventies.  These two were obviously utilised by the Newcastle Football League in their various periodicals.

Another interesting object is a poster advertising a match between the Perth Football Club and a Newcastle representative side at the Newcastle Showgrounds on 29 June 1957.

There is no doubt that Mr Arnold would be very pleased and proud to have his collection lodged with the History Society providing a home where the material will be very much treasured and valued.  Also his father, elected to the Australian Senate in 1940 for NSW, J J Arnold, who was secretary of the Newcastle Football League for several years, was a man keen to put the game on the map in the coal city.  His image also features in the many prints in the series.

Mr Granland said the Society is concerned that collections such as Mr Arnold’s may not be recognized for what they are and following the passing of their owner, these football treasurers are, on many occasions, just disposed of.  He urges anyone with a similar collection to contact the Society for its eventual safekeeping.

After a decisive win over AFL Canberra on 12 April 2015, AFL Sydney Women’s team took on a strong outfit in the return match on 5 June at Blacktown’s International Sports Park in the Women’s State of Origin series on Saturday afternoon.

The Canberra side was far too good for the Sydney-siders, running out 38 point victors.

Sydney controlled the match early taking a small lead into the first break. From after that though it was all Canberra, outscoring the Sydney side nine goals to one for the rest of the match.

As the series ended at one all, Canberra retained the trophy due because they had been previous winners.