The Reid family connections run deep at the Temora footy club with direct links to the 1959-1960 and 2012-2014 premierships that have nourished the club and its supporters between flags.

It was Temora’s second premiership in a row; the green and golds also beat Marrar in 1959 when “Nugget” coached from the sidelines while playing for Coolamon in the neighbouring major league, the South West DFL.

Mal and his twin brother “Jacko” were members of former South Melbourne captain Ian “The Heap” Gillett’s Coolamon’s premiership team that defeated Leeton before a record crowd for Australian football in the Riverina at the Narrandera Sportsground of 12,000.

A key member of the 1960 premiership team was Bayden “Ben” Krause, now aged 85 who had only started playing football a few years before but had a break-out year booting 80-odd goals and being awarded the CRL Player of the Year.

“We went through the season undefeated. We were all so super-fit, we worked hard on farms and we were well led by Nugget”, “Ben” told me in an interview for this article.

“We were very close, all good mates, we nearly all worked on farms or were shearers or timber-cutters, the only player who wasn’t worked at a bank in town” Ben said. “I remember working with eight team-mates in our shearing shed” added Ben.

The other place the Temora footballers congregated at was church as so many of the team were Lutheran. The Hartwigs, Noel and Ron, Frank Terlich, Brian Wehrsedt, and Alan, Brian and Barry Block as well as the Krauses, Ben and younger brother Wayne (aka “Mousie” (record games holder) went to the Lutheran church at Trungley Hall, 20 kms north of the town.

The Lutherans mainly from South Australia came to take up land after the pastoral runs were opened up for settlement in the early part of the 20th century.

The first football club was first formed in Temora in 1893 (Sydney Mail and NSW Advertiser 13 May 1893), but the club has not always been in continuous existence.

In fact, Temora has been a battleground since rugby league was introduced in 1912 by a school-teacher according to the history book, Temora: Yesterday and Today, 1880-1980.

This accords with the thesis that it was the “3 Cs – the chalkies, the coppers, and the civil servants” that introduced the game to the major towns in the Riverina.

But the small towns and villages held onto the football that their descendants had bought with them from the southern areas of Australia when closer settlement of the land was undertaken.

What emerged in the research for this article was the separation of town and district – with historically, the farmers, farm hands, and shearers played the indigenous game, and the “townies” played the rugby codes depending on their social background.

For most of the pre-WWII period Temora played against district clubs such as Tara, Pucawn, Mimosa, Springdale, Bectric, Rannock and Winchendon Vale (Ariah Park News (31/5/1923). However, research by Peter Clark (the author of the forthcoming book on the History of the Rannock FC) shows that for part of the 1930s there was a Temora and district league but no Temora club!

This is supported by Temora footy legend Phil “Hawk” Reid, who told me in an interview over the phone in the paddock in the rain delirious with joy that the crop was off, that his grandfather Malcolm Reid snr, known as “Mike” captained Mimosa in the Temora competition. 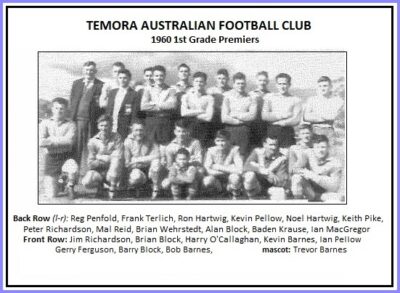 Another former Temora captain-coach Garry Richardson, son of 1959-60 premiership hero Jim Richardson, who coached in 1983 recalled that most of the players came from farms.

After the war, the Temora footy club resumed in the local district league, then transferred to the Ariah Park & District FL, but when that was disbanded the club went into recess from 1952-54.

It was Mike Reid and Jim Richardson among others that revived the club. Jim had gone to Temora to work as a guard at the RAAF base towards the end of the war and stayed on to become a shearer and was joined by his brother Peter, the full forward in the 1960 premiership team.

Temora entered the Wagga and District League and found immediate success by beating Junee by 3 points in the 1955 grand final, but two players who had played all season were deemed ineligible and the club refused a replay. The club made amends by sweeping to victory in 1956.

Both Marrar and Temora joined the Central Riverina league in 1957 when the Farrer league was formed taking in Wagga Tigers, North Wagga, Mangoplah and The Rock in a major shake-up to local competitions. New club Cootamundra and Junee joined the CRL (Central Riverina Football League) in 1960.

Buoyed by success in 1959-60 Temora joined the Farrer league in 1961 and had almost immediate success but were runner-up in 1963 and 1964 losing to Culcairn and Holbrook respectively.

It was when Temora entered the Farrer league that the club changed to blue and white vertical stripes to avoid a clash with Holbrook.

Adam’s son, 8 year old son Max, is set to continue the Reid tradition at Temora having started Auskick while Daniel’s twin babies, Felix and Teddy, have maternal grandfather Richard Colless planning for them to play in red and white.

Whitton Tigers topped the South West League ladder in 1960 but unfortunately missed out on playing in the grand final.

The match day programs for 1960 have been donated to the History Society and can now be accessed by members and friends (click) here, with hundreds more to comes shortly.

Whitton, is a small town in the MIA, just 25 kms from Leeton on the Irrigation Way. The major crop in the district is rice with the name of the local pub appropriately named: The Rice Bowl Hotel.

The town was established in 1881 when the south-west railway line was built from Junee to Griffith, and then on to Hay in 1882. It was named after the NSW Railways Chief Engineer, John Whitton.

The Whitton Football Club was established in 1892 and played scratch matches against district teams. The Reds, as they were known in the early years, started playing in district competitions just prior to World War I.

After winning the MIA Football league premiership in 1928, Whitton entered the South West competition the following year but could manage only two wins, finishing last. They returned to the Leeton district competition winning premierships in 1932, 1939 and 1946.

Whitton again returned to the South West league for the 1947 season and despite finishing second on the ladder after the home-and-away games did not make the grand final. The next year, now known as the Tigers, they did make the grand final but went down to Narrandera in a hard-fought game by 14 points.

The one that really got away was the 1951 grand final against Ganmain, “Just as Whitton seemed certain to win, Ganmain got the ball down to their forwards, Gumbleton collected it to get it through the tall posts as the siren sounded the end of an epic game” (Narrandera Argus, 21 September 1951). Final scores: 7-7 (49) to 5-14 (44).

There was another grand final appearance the following season but old rivals Griffith proved too strong.

After finishing on top of the ladder in 1960 it seemed as if the Tigers time had come. Whitton led Narrandera at half-time of the second semi, 8-2 to 4-8, but were kept score-less in the third quarter as the Imperials kick five goals to run out winners by 31 points. The following week Whitton were bundled out of the premiership race by Turvey Park, who in turn, were well beaten by Narrandera in the grand final.

Most of the Whitton players were sons of farmers, skipper Bernie “Rusty” Kelly and his brother Graham “Red” Kelly were off a wheat and sheep property, the Williams brothers Ian and Delwyn worked on the family orchard, while most of the others were from rice-growing families including twin brothers Edwin “Bruiser” and George Williams.

Whitton continued on the South West League until 1978. After round one of the 1979 season a player shortage forced the club to transfer to the Central Riverina League where it could compete against similar sized towns.

Former player and club president Alan Lenton recalls, “Our coach Tom Doolan was transferred to Albury in his work as a school teacher and star player Gary Tagliabue went to uni in Wagga so he transferred to The Rock. I’d have preferred to stay in the South West (League) but the players wanted to go to the CRL”

“We were fortunate to have local Jim Geltch, a Gammage medalist, agree to take on the coaching job. He did it for nothing. He just asked that the coaching fee be put into new sheds, which we did”.

The Tigers made the finals but went down to Barellan in the preliminary as they did again the next season.

Following the redistribution of the clubs in the Riverina into a two-tiered competition in 1982 by the VCFL, the Whitton Tigers were placed in the Riverina District league, which eventually became the Farrer League in 1984 fielding two divisions.

At long last Whitton enjoyed premiership success under former Bushpigs star Jamie “Fozzie” Robinson in 1985 followed by two more, in 1986 under Bruce Harrison, and in 1987 with club stalwart Errol Boots at the helm.

However, changing demographics in the district saw Whitton in 1992 merge with reformed Yanco, that had previously played in the Barellan League. Finally, Whitton bowed to the inevitable and buried the hatchet with long-time fierce rivals Leeton to become the Leeton-Whitton Crows.

The combined team finally won a premiership in the Riverina Football League in 2017.