South Sydney was formed when the Redfern Club changed their name in 1911.  Redfern was a founding club of the reformed league of 1903 and their best effort in the early days was runner-up in 1906.

The club slowly followed the shift in population moving south and when the league purchased the old Rosebery Racecourse in Botany Road, also in 1911, and they began to use that as a home ground, as opposed to their previous venue of Redfern Park.  The club also found many Sydney inhabitants moved to the model suburb of Rosebery when land became available from 1912 onwards.  Some of these were footballers.

South Sydney won the competition in 1914 but World War I decimated their numbers and they fell on hard times to the extent that by 1917 they were out of the competition.

There was a revival following the war and in 1920 they were back, but playing in the reserve grade competition.

Nearly all of their players were locals and their enthusiasm saw lots of success, winning the competition in 1923.

By 1925 they had returned to the senior competition and from 1926, were regulars in the final four.  They had a good club, good players and were well administered.

During the late 1920s someone had the idea of forming a junior competition in the district and by 1927 it had five clubs: Botany, Lauriston Park, Rosebery, Daceyville and Gardeners Road.  It helped that Rupert Browne (pictured), the sportsmaster at Gardeners Road school, an institution which, believe it

or not, boasted 1800 students in 1918, was also a football supporter and ensured that his school fielded regular teams in schools competitions and founded what became an absolute nursery for the South Sydney club in the 1930s -50s.  For many years Browne was a vice president of the South Sydney Club.  The school produced many footballers, not only for Souths, but for most clubs throughout Sydney.

The secretary of the new and unique association was George Headford.  Born at Waterloo in Sydney in 1900 he had no specific ties to Australian football apart from a short stint as South Sydney club secretary, but was a keen and enthusiastic promoter of the code and his small Association.

He lived in Rose Street Botany and was probably one of many responsible for the club in the same suburb.  The Association fielded an open age competition and at least one junior division.  They played at Waterloo Oval, Alexandria Park and Rosebery Park or to use its correct name: Turruwul Park.

The Association continued into the early 1930s but some clubs fell by the way side and those that were left joined the Metropolitan Australian Football Association with the Rosebery club continuing into the 1950s.  By 1936 Headford had moved to Maroubra and out of the main path of the game in the area at the time.  His departure probably contributed to the demise of the junior Association.

This district association proved a great fillip for the South Sydney club but with other football codes vying for players and it probably having little administrative support the competition faded into obscurity and eventually so too did the South Sydney Club in the mid 1970s.

A junior competition was reformed in the district in the mid 1950s when Rugby League did not have a junior association.  It went well but probably because of lack of personnel, when one person did everything in the small clubs, it too, went by the way side. 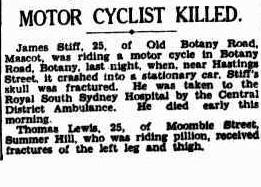