Champion defender Ross Henshaw has been nominated for induction into the NSWAFL Hall of Fame. Neil Cordy looks back at Ross’s formative years in Albury and his key role in North Melbourne’s 1970s revival. 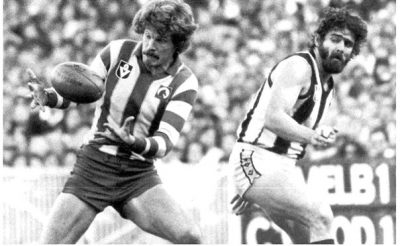 Dual premiership player Ross Henshaw has some encouraging advice for the current North Melbourne team who are starting to turn the corner after a horror 1-10 start. Things can change very quickly.

Henshaw played in the last Kangaroos team to claim the wooden spoon in 1972. But three years later they won their first ever premiership beating Hawthorn by 55 points.

Henshaw isn’t promising an instant turnaround for David Noble’s team but it’s worth remembering just how far back North came from to claim their first premiership.

“North aren’t travelling well at the moment but we were in the same spot in 72’,” Henshaw said. “Barassi came in 73’ and we won nine games, we lost the 74’ grand final to Richmond and then beat Hawthorn in the grand final the following year. Thirteen of those players who were part of the 1972 wooden spoon were in the 75’ Premiership team.”

When Henshaw arrived at the club in 1971 he could have been forgiven for thinking grand finals and premierships weren’t going to be part of his footy journey. In his first two seasons at Arden Street he played in just two winning games.

It was a shock to the system for the teenager from North Albury who wasn’t used to losing on this scale. Henshaw loved growing up in Albury where he enjoyed the benefits of a big extended family and a strong junior club at the Hoppers (North Albury). The footy club brought good coaching and great friendships as did Albury High School which provided a strong academic and sporting culture.

It stood him in good stead for a difficult start at the Kangaroos who at the time were perennial cellar dwellers. The 72’ wooden spoon was their third in five seasons and their last finals appearance was 1958.

But in 1973 all that all changed with the arrival of Ronald Dale Barassi from Carlton along with three of the best players of their generation Doug Wade (Geelong), John Rantall (South Melbourne) and Barry Davis (Essendon).

Of the quartet it was the Bombers champion who had the greatest impact on Henshaw.

“Barry Davis was the biggest influence in my career,” Henshaw said. “Barry was sensational for me, he was a real mentor. He taught me the art of defence. We analysed opponents and the biggest thing was how to train properly. He helped me truly understand the phrase, ‘You train as you play.” He did a lot of extras and I followed him. I loved training, it was good for your mental health and it was just healthy in every way.”

After 218 games at Essendon Davis was the right player at the right time for Henshaw who had just turned 20. Davis was in his 11th season when he arrived at Arden Street but he was a long way from done.

“Barry had three seasons at North Melbourne, he won two best and fairests and was the 75’premiership captain,” Henshaw said. “He played most of his career as a half back flanker and he came to North and re-invented himself as a ruck rover.”

Despite the dramatic improvement in 73’ and 74’ a 0-4 start to 75’ sparked rumours of a mutiny among the players. Club president Alan Aylett wasn’t having a bar of it. “Alan held a meeting with the playing group and said he’d heard rumblings about Barassi’s aggressive style of coaching,” Henshaw said. “Alan said while he was president Barassi will always be our coach so shape up.”

While Barassi’s verbal barrages didn’t sit well with everybody, Henshaw says they had a galvanising effect among the playing group.

“He had an uncanny coaching ability to unite us as a group,” Henshaw said. “We all cared about each other and had a strong connection. We had loads of trust in each other as team mates which was all generated by Barass.”

After the horror 0-4 start to slow start to 75’ North kicked into gear in round five. They beat Geelong at Kardinia Park and won 14 of the last 18 games to finish third. They lost to Hawthorn for the third time that season in the second semi-final but would get their revenge in the game that mattered the most.

“We played the Hawks four times in 75’,” Henshaw said. “The only time we beat them that year was the grand final. The playing group thought it was our time. We had unbelievable support from the crowd. The footy public were on our side. John Rantall played an amazing game on Leigh Matthews. Matthews was a huge influence and John kept him quiet. When you are young and have an experience like that it stays with you for life.”

Henshaw played in five grand finals in a row winning another in 1977. He was part of one of the great defensive units the game has seen alongside David Dench, Frank Gumbleton, John Rantall, Brent Crosswell, Daryl Sutton and Gary Cowton.

“We had a great backline and some great players everywhere like Keith Greig and Wayne Schimmelbusch, they were great team mates and super blokes as were Xavier Tanner and John Byrne who were there for the second premiership.

“The best thing about my career was being a one club player and sitting around with your mates after the game and looking each other in the eye and saying this is what we achieved together.”

Henshaw also paid tribute to the contribution of players from the Ovens and Murray League and the Riverina. “It was a big influence on the history of the club,” Henshaw said

“In the first premiership there were five players from that part of the world. Mick Nolan (Wangaratta Rovers), Frank Gumbleton (Ganmain), Peter Chisnell (Corowa) Sam Kekovich (Myrtleford), Gary Cowton (Benalla) plus Paul Feltham who spent time in Sydney (Balmain). Nowadays there’s a lot of North Supporters in the North-East and Riverina.”