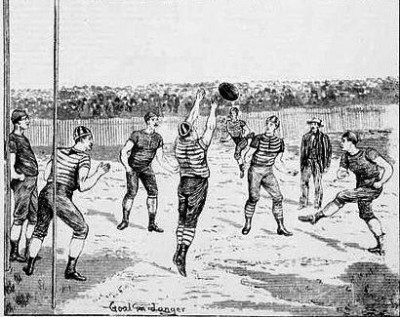 Hereunder is an article which appeared in the Sydney Morning Herald on 2 June 1866.

“Football Club -The first annual meeting of the Sydney Foot Ball Club was held last night, at the hotel of Mr. B. Palmer, Pitt and King streets. The chair was occupied by Mr. Oliver. The minutes of last meeting having been read and confirmed, the secretary, Mr. R. C. Hewitt,read the following report, and it was adopted – In submitting this our first report to you, your committee feel much pleasure in complimenting you upon the steady and favourable progress the club has made from its formation throughout its first season. Although at first, many prejudices were held against us in our infancy, and in spite of great opposition the club has clearly shown that foot ball properly played, is not a perilous break-neck folly, but a means of health, giving recreative enjoyment. The number of members elected during last season, was 66, out of whom only 24 paid their subscriptions, but before the finish of the ensuing season, from present prospects, your committee feel much pleasure in announcing to you that they have sanguine hopes that the number of members will be greatly increased. Your committee have also great pleasure in being able to inform you that not only is the club favourably looked upon in this city, but that its fame (principally through the report of its excellent matches with the Australian and University Clubs) has extended to the neighbouring colony of Victoria, and your secretary has received an intimation of the willingness of the football players of that colony to inaugurate a series of intercolonial football matches, and to show the earnestness of the Victorians, they would visit Sydney during the forthcoming season, could a team able to compete with them be got together and us guaranteeing to play them a return match during the next season in Melbourne. In conclusion, your committee would urge upon their suc-cessors the desirability of at once selecting some other ground more suitable than that on which the club played last season-namely, Hyde Park-as it is certainly dangerous to all who play thereon, also to endeavour, as has always been their maxim, to keep the club well supplied with ‘the sinews of war’ ‘ The following gentlemen were unanimously elected to the offices prefixed to their names -President, Mr Richard Driver, M L.A. , secretary and treasurer Mr. Richard C. Hewitt, committee, Messrs Shepherd, Samuel Cohen, Dawson, Charles Oliver, and Leslie J.Park. Nine new members were elected. A resolution was carried to the effect that the “Victorian Rules of Football, agreed to at a meeting of delegates of clubs held at Melbourne on the 8th of May 1866, be adopted as the rules of the Club. ” The secretary stated that he had received a challenge from Melbourne to play a match in Sydney, and the proposal was very favourably entertained, Mr Hewitt and Mr Cohen were elected delegates to confer with the represetatives of other clubs with a view to make the arrangements for accepting the challenge. The business was concluded with a vote of thanks to the chairman.” (Sydney Morning Herald (NSW : 1842 – 1954), Saturday 2 June 1866, page 6)

We will endeavour to get the answer to this very vexed but important question.  More news on this coming  and just who were these people: Hewitt, Cohen and Charles Oliver.