In September 1945, the Second World War had just about finished and while residents of Sydney as well as the interstate servicemen based there had their footy needs well met during the conflict through some top line players who were participating in the competition, officials saw a need for an interstate fixture;  one with perhaps a touch of glamour and competitiveness that could attract a crowd and a gate ($$).

The NSW Football League had received invitations from both Queensland and Canberra Leagues to visit that year but they declined both because, they said “of travel and accommodation difficulties” but more particularly because such matches were “a bit premature.”

In the preceding two weeks, 54,000 and 46,000 people had witnessed the two VFL semi-final matches in Melbourne so there was a sense of a nation beginning to return to football normality.

Subsequently, late in the season the NSWAFL tendered an invitation to the St Kilda Football Club to visit Sydney and play a series of games.  They accepted and in fact extended their visit to a 10 day stay beginning September 14.  On the same weekend as their match against NSW, Hawthorn played a game in Albury.  So maybe more than two VFL clubs participated in exhibition matches away from their home base?

During their stay St Kilda club officials estimated that their party would spend £1,500 ($103,000 today) which included £358 in accommodation and £370 in travel.  They considered the remainder would just be spent in other areas by those in the contingent.

Of all the VFL clubs who had played in Sydney since 1881, St Kilda was not one so this visit would be a first – and last.  In 1945 the Saints finished at the bottom of the twelve team competition.

Their schedule in Sydney included three games; two against NSW and a midweek fixture against a Combined Services outfit.

The first was against NSW then the game against a NSW Services Team (combined military personnel) both of which were played at Erskineville Oval.  Unfortunately the NSW League could not secure a ground for their second of their two match (or third St Kilda game) contest. We imagine the reasons being, 1) because the period was a ground changeover to summer sport, and 2) perhaps the military still occupied many of the city and suburban grounds.

League officials went to extraordinary lengths to hire a ground for this game.  They even tried to procure Cumberland Oval at Parramatta but the attempt failed.  It is interesting to note that Parramatta in the days of WWII could almost be classified as ‘country’ with no Australian football at all played in the area.  Other grounds that were tried included Henson Park as well as Marrickville and Lidcombe Ovals.

Nevertheless and as a fine gesture, the St Kilda club donated 70% of the £163 net gate from their only NSW match to the League.

In a strange twist of fate, St Kilda included the 24 year old energetic Sam Loxton in their team.  Loxton was recruited by the Saints in 1942 and played with them up until 1945 when following his promotion to the rank of sergeant in the Australian Army, he was transferred to Sydney.  There, he was immediately appointed captain of the Eastern Suburbs Club.  During the season however when on leave in Melbourne, Loxton played in the round 11 clash against North Melbourne much to the delight of their fans.

The ‘Serviceman’s Rule’ of the time permitted those in the military to turnout with their parent club if they be registered in another state, circumstances much

Strangely this talented footballer/cricketer was ‘dropped’ from the NSW team a week out from the game then immediately selected at full forward for St Kilda.  A fact not lost on the media.   Sam failed to kick a goal in the game although as an aside, he won the NSWAFL leading goalkicking award for 1945 booting 71 goals.

Loxton went on to play cricket for Victoria and later Australia.  He was also a member of Don Bradman’s ‘Invincibles’ that toured England in 1948.

St Kilda also a boasted a former local in their lineup in Reg Garvin.  A past Newtown player and ex-junior who was recruited by the Saints in 1937.  Garvin captained and coached St Kilda for two seasons during his 1937-46 career with the club.

Also in the Saints lineup was Billy Wells who tragically injured his spine when a troop train he was on was attacked in Egypt in 1941.  Doctors said he would never walk again and yet amazingly when he to Australia he again took up with North Melbourne and then onto St Kilda for the 1944-45 seasons.

Two of the bigger St Kilda players were vice captain Sid Snell and Col Williamson, both members of the Victorian Police Force.  Snell had represented Victoria on two occasions and also excelled as a sprinter, winning the Maryborough Gift in 1938.

Williamson played 165 games for the Saints in a ten year career, coaching them in 1952-53.

The day of the match contained boisterous weather and conditions that mitigated against a good display of football and yet it was said 8,000 attended the game.  Fifty three year old local umpire, Bill Hunkin, had control. 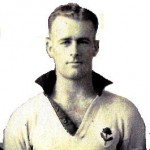 The match didn’t start well for St Kilda.  They were down by 22 points at the first change and it wasn’t until the second term that saw them produce a more competitive effort allowing them to take the lead at half time by the narrowest of margins.

In the third term it was all NSW.  They booted 4-6 to the Saints nil.  Although assisted by a stiff breeze in the final quarter, St Kilda again made no impression on the scoreboard.  They were beaten 10-18 (78) to 4-24 (48), with many of their behinds being kicked only metres from the line.

The NSW team was made up mostly of service personnel, many of whom only came together on the morning of the match; they played strong hard football.  All in the team participated for their respective Sydney clubs with a number however based at distant camps so attending training was out of the question.

St Kilda’s team too contained several servicemen all of whom were members of their club.  It is likely that several of these were more than likely stationed in Sydney or surrounds at the time of the game.  They included: Eric Comeford, Geoff Driver, Terry O’Brien, Bill Phillips and Bob Wilkie.

Given that these players along with Loxton PLUS their seconds coach, Jack Brenchley who at 34 had the role of coach of the team during their NSW tour, all played for St Kilda in this game certainly questions of the depth of the team.

The subsequent midweek fixture against Combined Services saw a closer 7-17 (59) to 7-10 (59) win to the Saints with captain for the match, Reg Garvin getting them in front minutes before the end with a 40 metre drop kick goal.  Then another by Bob Wilkie seconds before the end of the game sealed the victory.

At this stage the only NSW players we have been able to identify are:

According to the league's Football Record the following week, the girls "were only subjected to the occasional sexist remark including one player who questioned goal umpire Kirsten Tona's ability to see with so much makeup on."