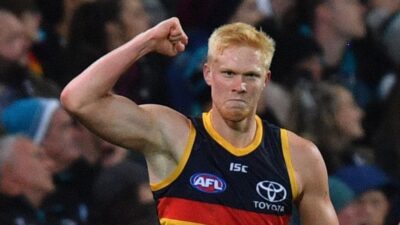 Mangoplah Cookardinia United Eastlakes player Elliott Himmelberg polled 2 votes for Adelaide in the win over his older brother Harry’s team, the GWS Giants.
The brothers both played at MCUE based just outside Wagga before going to play for ACT club Eastlakes in the NEAFL.
Meanwhile, Geelong power forward Tom Hawkins retains the lead in the Carey-Bunton Medal for the Best NSW Player in the AFL after Round 16.
He leads the award by four votes from Gold Coast co-captain Jarrad Witts (ex-Sydney University).
The former Finley player also has a handy lead in the Coleman Medal race – he is nine goals ahead of West Coast forward Josh Kennedy and Charlie Dixon from Port Adelaide.
The AFL Coaches Award voting – which is used as the basis for the Carey-Bunton Medal – has gone into camera for Rounds 17 and 18.