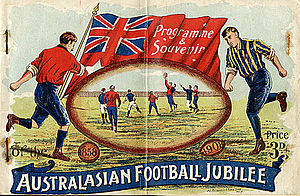 In 1908 NSW competed in an All-States Football Carnival in Melbourne which celebrated 50 years since the birth of the game.

Each state was permitted to include a maximum of 25 players which was quite a number in those days considering teams were only permitted 18 on-field players with no reserves or interchange.

The NSW contingent comprised players from Sydney, two from the Wagga district, one from Hay and eight from Broken Hill.

These eight were: A T Conlin, Ethelbert (Bert) Renfrey (picutured, and you can read about him by clicking here – a very interesting character), G Colley, R

Scott, Jack Hunter, Bennet Eric Gluyas, Robert Rahilly, and A Millhouse – [details of their given names would be appreciated if known].

Football was a very serious business in Broken Hill in 1908, so a comprehensive agreement was drawn up between the Barrier Ranges Football Association and each player which they were required to sign.

Some of the articles in the agreement included:

Particular offences were considered as:

We have no evidence that others, particularly those from Sydney, had to sign such an agreement.  We can only speculate that the boys from Broken Hill must have been a wild bunch!

The team stayed at the Prince of Wales Hotel, St Kilda.  They trained at the St Kilda Cricket Ground under the direction of former St Kilda player, E L (Curly) Jones.  The captain was Ralph Robertson and manager, E W Butler, both from the East Sydney club.

The coaching of Jones, although appreciated, was not considered beneficial, particularly in the loss to New Zealand.  This was in the days when, apart from the very major clubs, captains ran the teams and did the coaching.  Such was the case in Sydney.
(image shows NSW captain, Ralph Robertson)

The carnival was quite a significant milestone in the recognition and evolution of Australian Football in the newly federated country, despite recording a significant loss on the series.  H C A Harrison, acknowledged as the Father of the Game and author of the first rules, was in attendance where he made many speeches and gave several interviews, a number of which reflected on the very beginnings of the game.

Ironically enough, our research has revealed that Bert Watts, a former captain of the Paddington Club who also performed that role when he returned to Sydney from a military posting on Thursday Island, was a member of the Queensland team.

Watts will figure prominently in the book the Society is publishing on the Impact WWI had on Australian Football in Sydney.

Details of NSW’s participation in the 1908 carnival are currently being loaded into the website’s database.  Click here to view the games. (use the date option, 1908, for best results).

Victoria won the championship and each of their players was presented with a silk pennant and gold medal.  We wonder where any of these items are now?