Dr Rodney Gillett continues the series on famous football grounds in NSW with a look at Erskineville Oval which was the venue for grand finals and interstate fixtures and the home ground of the extraordinarily successful Newtown club from 1903 until 1986.

Erskineville Oval hosted fifty Sydney AFL grand finals in the period 1908 until 1990 during which time it was the major ground for local and interstate fixtures.

It was the home-ground for the Newtown football club that was a powerhouse in the Sydney competition from its foundation in 1903 until its demise at the conclusion of the 1986 season.

Long-time Newtown official and NSW league administrator Jim Phelan in a 1930s article in the NSW ANFL Football Record explained that the fundamental reason for Erskineville Oval hosting the Sydney finals and interstate fixtures was financial. A better result was obtained from Erskineville than either the SCG or at the R,A,S., Showground, Moore Park (now FOX Studios)

Further, that the “whole atmosphere is, on the whole, more congenial in a football sense than that of any other playing ground controlled by the League” (NSW ANFL Football Record, 21 September 1935).

Erskineville Oval was originally developed and opened in 1885 as Macdonaldtown Park, however, it was later renamed in 1892 to its current title following the change of the name of the municipality.

The original ground (pictured below in 1935) had an east-west orientation and was located further west than its present position, more near Binning Street, but in 1937 construction started on Department of Housing flats with the ground relocated further east to its present location, adjacent to Mitchell Road.

The ground was enlarged specifically to cater for Australian football and was reconfigured to run north-south. A new grandstand was also constructed. The new oval

was first used for by the Newtown club in season 1940, and it was the venue for the grand final in the same year, won by Newtown.

From a player’s perspective it was a good ground to play on because it was specifically developed for football, according to champion Newtown full-forward Denis Aitken, who won the league’s goal-kicking in 1962 with 96 goals and played in the 1967, 1968 and 1970 premiership teams.

“It was a good-sized ground and provided for more open play, it was also good from a spectator’s point of view and the ground had a good atmosphere with a grandstand as well as good vantage points around the ground” Denis told me in an interview for this article.

“Because the ground was open to the elements, the wind was always tricky. I mainly used a torpedo punt to kick for goals but at the southern end when it was windy I used a drop-punt”.

Denis like so many of his team-mates at the time like key defender Dennis O’Connor, back pocket Greg Schroder, famed boxing trainer Johnny Lewis, speedy winger Alan Sigsworth, half-forward Johnny Egan, rover Max Dean, centreman Graeme and his brother Reg “Sunny” Sambrook and the Free brothers, Ray, Bill and Harry, all grew up in the area.

Denis remembers going to Erskineville Oval as a young boy with his father, who worked in a factory at Alexandria. They lived at St Peters and took the train to Erskineville station, then walked the half-a-mile to the ground.

History Society President, Ian Granland recalls first going to the grand old ground in the early 1960s to see his club South Sydney play Newtown in a local derby, “Newtown were the best performed and organized club in Sydney at the time, they had strong support, mostly locals who would walk-in from all around the neighborhood, as well as catch the tram from Botany Rd and get off in Mitchell Road”.

“The Newtown supporters were very parochial, they were used to success. After games, which they usually won, they’d stream into the nearby Kurrajong pub to fraternize with the players”.

Newtown won its last premiership in 1970 when it beat North Shore in the grand final at Trumper Park, which became the venue for grand finals from 1956 until 1978. 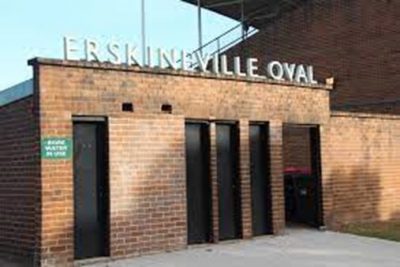 Newtown’s last “hurrah” was the 1981 grand final under North Melbourne premiership star Sam Kekovich, when they beat traditional rivals East Sydney in the 2nd semi final but two weeks later, lost to Easts who were under first-year captain-coach Greg Harris by 89 points in the decider.

After not winning a game and suffering demoralising defeats in the 1986 season the Newtown club folded.

Erskineville Oval had again become the venue for Sydney league grand finals in 1981. This was after respective grand finals at the Showgrounds (1979) and the SCG (1980) for the same reasons that Jim Phelan outlined in 1935. It continued to host the grand finals until 1990.

However, with no permanent tenant the lease on the ground was taken over by the South Sydney Rugby League Club for training, thus ending over eighty years association with Australian football.