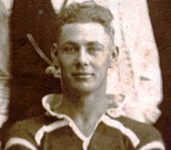 You have probably never heard of Freddie Davies  …  not many football followers these days have.

But Fred was one of those rare players from NSW (Sydney), who went on to captain a VFL Club, but that was in 1934.  Ironically Davies was not the first Sydneyite to captain his VFL Club, Fitzroy.  Chris Lethbridge from the now defunct, YMCA Club was captain in 1922 and later non-playing coach.

However Fred had an ignominious start to his VFL career.

Born in Sydney he attended Double Bay Public School where the headmaster, Tom Stafford, was a keen (Australian) football supporter and one of few teachers in Sydney who actively promoted the game in and out of school.

Following his schooling the snowy headed Fred was elevated to the ranks of  local senior club, Paddington and by 1925 was a permanent fixture in their first grade.  When the team combined with East Sydney in 1926 he went on to become one of the stars of the new Eastern Suburbs Club and the league.

Then in the All-States carnival held in Melbourne in 1927 where he again was representing the state, the manager of the NSW team, Leo Percy, made an astounding announcement at a public function.

He told those gathered at a dinner held during the carnival where officials from all of the VFL clubs were present “I want to refer to the despicable action of the officials of one of your League clubs in persuading Davies, one of our best men, to sign an agreement to play with their team next season. I can assure you that I will do my utmost to prevent it”

It was an unfortunate introduction to league football for Davies.  It was also reported that he knocked back a big offer £4/10/, a week ($340 in today’s money and well in excess of the weekly wage) to play football and a job in the bargain in 1928, however it wasn’t until 1930 that he made his entry to Melbourne football in a season where he played the whole 18 games.

Fred ended up playing 63 games for Fitzroy from 1930-34 during a period when they didn’t enjoy the best of success.  He gained the captaincy in his last year by default when the original captain (and coach), Jack Cashman was of the opinion that he did not have the committee’s complete confidence and went off to play with Carlton after only two games.  It was then that the captaincy of the side was thrown in Fred’s lap and he went on to lead the side for the rest of the season, winning his first (against Carlton) and a further five games for the year.

After that the 28 year old pulled up stumps and returned to Sydney where he was appointed captain of the new St George Club and later leading them to a premiership in 1937.