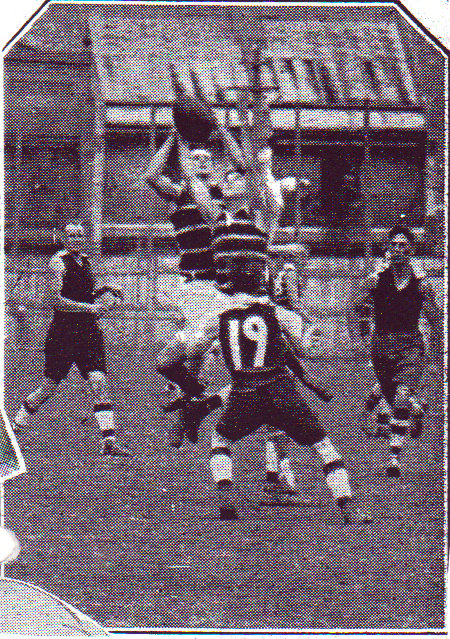 1930 football in Sydney was a period of much dissent yet was also a time when more images of action photographs began to appear in newspapers.

Here is one in a match between the Eastern Suburbs Club and Newtown at Trumper Park taken in early June 1930.  Easts players are in the striped jumpers.

Ironically the sight of the two tenement houses in Roylston Street, at the eastern end of the ground is again captured in this image.  These two houses, which you could have picked up for a couple of hundred pounds (probably for both) are featured in so many football photos taken at Trumper Park over the years.  We doubt if many of us could afford them now.

Click here for a look at Trumper Park today taken from the Glenmore Road end.  A far cry from its fabulous days when it catered for Sydney’s best football.

Early in that decade, South Sydney threatened to leave the league.  Where they would go is unknown but the league was ready to advertise for another side to take their place should they have left.  One reason given by the club for their decision was the omission of their star rover, Jimmy Stiff, from the state team which participated in the Adelaide Carnival.

However a ballot was taken of all the senior players at Souths who resolved to continue playing.

South Sydney were minor premiers in that year although were defeated by Newtown in the grand final.  Souths won the reserves competition.

A glimpse of the schools playing in 1930 include: Stanmore, Daceyville, Ultimo, Maroubra Junction, Kogarah, Hurstville and Gardeners Road.  A team playing in the ‘junior’ competition was called ‘Central Band of Hope’, heaven knows where they hailed from.

Twenty thousand attended a match between Richmond and Carlton at the SCG.  These clubs divided 66.23% of the gate between themselves.