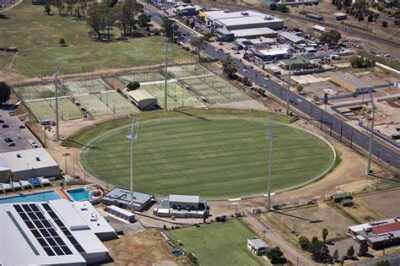 Robertson Oval is now the headquarters for football in Wagga, again.

This followed an extensive revamp of the well-known old ground in 2012 that involved extending the length of the field, a complete re-turf, upgraded change rooms and installation of lights to meet the requirements for staging AFL fixtures.

Prior to the upgrade, Robertson Oval had shared the premier fixtures for football with Maher Oval, the ground at the Riverina Australian Football Club in south Wagga that was established in 1971.

It remains the home-ground for the Wagga Tigers footy club, which has played on the ground since 1911, when the club was known as Federals (formed in 1887).

Robertson Oval is an enclosed ground located in the Bolton Park sporting complex where it was previously known as No. 1 Oval. A grass embankment runs around three-quarters of the oval with a 350-seat grandstand and social club on western side of the ground. The ground now has a capacity of 12,000.

The ground was named after prominent Wagga businessman Cameron McLean Robertson, who was the president of the Community Advancement Fund, that donated funds to the Wagga City Council for redevelopment of the ground and the construction of a grandstand. He was the father-in-law of ex Tigers player and football benefactor John Braid. It was named Robertson Oval in 1963.

Cricket goes all the way back to 1878 when a Wagga Wagga team comprised of 22 players played an Australian XI that was preparing for the tour of England. Australia was led by Dave Gregory and included the Bannerman brothers, wicket-keeper J.M. Blackham, and W.L. Murdoch who made 93 runs. The visitors won by an innings and 117 runs.

Touring cricket teams from England, New Zealand and India have played Southern NSW teams at Robertson Oval over the years. Colin Cowdrey took 2-9 and Derek Underwood 2-15 when the MCC beat Southern NSW by 6 wickets in a one-day game in January 1971.

Local skipper Stan Dasey dismissed both openers, Geoff Boycott (76) and Brian Luckhurst (62), stumped by Albury’s Steve “Stumper” Rixon, who, of course, later went onto to play for NSW and Australia.

A spinner, Dacey at one stage had 1/12 off three balls – the first two balls were hit out of the ground and landed on the bowling greens of the neighbouring South Wagga Bowling Club.

The crowd record is 11,000 which attended the rugby league international between France and the Riverina – won by the French 25-14 in 1960. In 1954 a crowd of 10,732 attended a match between Great Britain and Riverina won by the Poms, 36-26. Jim Daniher, father of Essendon’s Terry, Anthony, Neale and Chris, scored two tries for Riverina.

Terry Daniher was the “Emperor” of Robertson Oval when he led Wagga Tigers to five premierships in six years in the Riverina Football League in the nineties after finishing his illustrious VFL/AFL career with the Bombers.

The most decorated player from Wagga Tigers is Paul Kelly who had a highly distinguished career at the Sydney Swans where he won the 1995 Brownlow medal and led the Swans into the 1996 AFL Grand Final.

In recent years, NAB Cup Challenge matches have been played at the venue; last year, 2020, the GWS Giants beat Richmond. Previous matches include the Giants against St Kilda (2013) and North Melbourne and Collingwood (2016).

The Farrer League hosts its grand final at Robertson Oval each season, and the final of the Carroll Cup for the secondary schoolboys’ competition is also played under lights at the ground and attracts crowds of up to1500 spectators.