Chris Huon is a life member of the NSW Australian Football Umpires’ Association.

Chris lived in Sydney and was introduced to Australian Rules football by the McCourt family who lived next door.  He joined Vince and Pat who were already playing for Miranda in the St George Area starting in the under 12’s and continued until the under 16’s when he transferred to St Patrick’s in 1963 which was closer to home.

In his final years of junior football Chris became interested in umpiring and started officiating in junior games.

Upon finishing junior football, Chris had two choices? Try out for third grade with the St George club or continue with umpiring.  He adopted the latter.

In 1963 he joined the NSW Umpires Association and at the same time assumed the challenge of arranging umpires for the St George District JAFA from Alan Gibbons who had done it for years. This took Chris in contact with Jim McSweeney who proved an inspiration with his guidance and instruction, assisting him at this time both on the junior front and also on the senior group.

He started his senior career as a boundary Umpire soon finding his way to third grade (U19) games before his eventual promotion through second to first grade where he went on to umpire 97 games as a central umpire before retiring at the end of the 1975 season.

Fortunately for us (and you), Chris kept a scrap book.  Included in the book are newspaper articles and, Football Records, his umpiring appraisals, reports and other very interesting documents.

Clubs provided goal and boundary umpires for the Under 19 grade.

Chris was treasurer of the Umpires’ Association in 1972-73.

Although continually overlooked for a first grade grand final, Huon was a very accomplished umpire. He was selected as the

central umpire in the June 1969 inter-state fixture between NSW and South Australia Seconds at the SCG.  Additionally, the following year he was one of only two umpires chosen to represent the association at a Royal Reception for the Queen and Prince Phillip held in Sydney.  We have attached a copy of the invitation on the right.

Below is an inventory of payments Huon received in 1971, obviously hand written by the association treasurer.  Strangely enough, most of his appointments that year were either in reserve grade or in second division.  Towards the latter part of the season he was back on the first grade panel.  Note the fine for non-attendance at training.

Also included is a 1972 umpire’s report by Huon on a South Sydney player for striking Western Suburbs player, John Caulfield.  The reported player was later a long term member of the league’s tribunal!  In this instance he was found guilty and received 3 weeks.

Further, there is a far from complimentary 1969 report by South Sydney club official Allan Sullivan, BA JP, on a Club Umpire Appraisal Form in a separate match against Western Suburbs.  The form is dated 3 April, it should read 3 May.  Brian McMahon, the Western Suburbs official,  who completed a similar form described Huon’s effort as: “commendable performance.  Appeared to exercise good control and he was consistent.  A hard game to umpire but a job well done.” Wests won the game 33.24 (222) to 2.7 (19).  Souths did not have a good season that year.

We add this because Allan went on to become a successful secretary then president of the Western Suburbs Club.

Then there is a 1971 hand written report by an umpires’ observer on Huon’s performance in a first grade match between Balmain and Western Suburbs at Picken Oval.  John Lanser, a former chairman of the Tribunal, is noted as a boundary umpire in the game.

Finally, we found a report from a 1969 pre-season game between Balmain and South Sydney where Huon was complimented for his effort in a report that said:

The image at the top of this report is the 1969 first grade, grand final umpires who are: back row, l-r: Leo McDonald, Stephen Sewell, front row: Graham Whykes (trainer), Ken Potts (boundary), Chris Huon (emergency umpire), Brian O’Donohue (central umpire), Dave Cullen (boundary), Bob Tait (trainer).  The photo was taken at Trumper Park prior to the commencement of the game.

These are in the days of one field umpire.  Both Whykes and Tait were field and boundary umpires and as members of the association, volunteered to be the umpires’ trainers for the day. 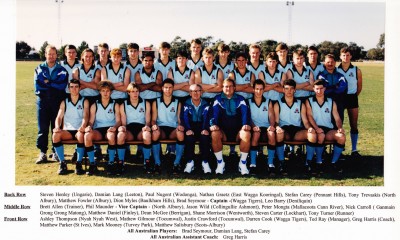