The occasion took place at All Saints Church in Victoria Road, Parramatta, Bill’s domestic church for the past 25 years.

Over 300 were in attendance, and included people from the various organisations he had been involved with over his time, including a number from his working life in the state schooling system.

There were also many from the several football organisations Bill was involved with over the years including the Balmain and Pennant Hills Clubs as well as the Pennant Hills junior club.

The minister at the church spoke at some length about Bill’s association and activities in the church and amused the congregation with the fact that early in their relationship, they ‘clashed’, which apparently was not an uncommon occurrence with Bill.  Another time when Bill stood him up to him because he used grape fruit juice instead of wine at communion after running out of the latter.

Both of Bill’s sons also spoke and the church put on a fine spread following the service. 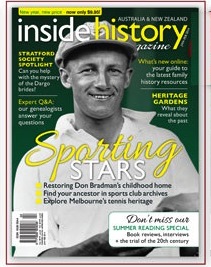 The Society has had a write-up in the just released 20th issue of the  Inside History Magazine.

The booklet is published every two months and contains some most fascinating articles on various items of Australian History.

It has been on the market now for about 2 years and is one of the most professional publications I have ever seen.  It is exceptionally well presented and the content is real, authentic and accurate.  Something very necessary in magazines of this nature.

Purchase is normally by subscription with a special 12 month deal on at the moment for $50 or 6 months for $25.  Digital subscriptions are also available.

We don’t normally push products on this site but if you are a history buff, this is well worth the investment.  It is independently owned and 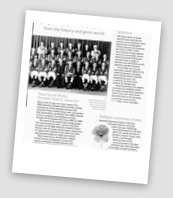 comes out of Sydney.

Our article centres on the Society’s online Rep Team Programme which features the names and details of players representing NSW as far back as 1881.  We are slowly adding more games to the repository and currently are up to 1905.  You can check out the Inside History article by clicking this image:

The photograph in the article was selected at random from our website and ironically enough, features some well known past Sydney football identities including Joe and Jack Armstrong, Aub Reid and Alby Young.

With regards to the programme, our researchers have recently found never before listed NSW represetative games, which just goes to show how well the records were kept all those years ago.  One was a game against a Wagga combination at the ‘Wagga Wagga Cricket Ground’ on August 16, 1905.  The NSW team stopped over at Wagga on its way back from Melbourne where they played a match against the VFL.  We will feature an article on the Wagga match in our next post.

We have been inundated with requests to post more team photos from past Sydney football.

The simple answer is we don’t have them!

Since the Society started with its website 18 months ago, it has repeatedly asked for all types of photographs from former players and clubs.  A few players have sent in images, some of which we have posted but apart from what we have been able to beg, borrow or steal our team photograph repository is relatively lean.

Vice president and umpires’ friend, Bill Carey, who is still actively involved in football (but not as a player) said he has canvassed various sources and former cronies in an attempt to solicit more pictures, but according to Bill, his pleas often fall on deaf ears.

“All of us try and get hold of as many photos as we can” Carey said.  “They trickle in, some in pretty poor condition, and we have posted a number of these under the

various club categories on the website but we need more.  If you look there has to be several hundred there now”

Carey, who has recently recovered from a major operation to counter a cancer affected lung is passionate about collecting items from Sydney’s past.  Before the Society moved into accommodation at the Western Suburbs Football Clubrooms at Croydon Park, Carey housed much of the Society’s collection at his Carlingford home.  He also sent in excess of 50 archival boxes of historic football material to the Sate Library of NSW.  Unfortunately once objects and documents are lodged at the library it cannot be reclaimed.  It can be viewed but not taken back.

So the Society is again making a genuine appeal for photographs, in particular Sydney team photos.

“We don’t care how old they are or what condition, we can copy and return or will take possession and certainly keep them under the best archival conditions as possible.  Just let us know” Carey added.