In 1943 a slightly built, sandy headed young man signed up for the army in Melbourne in February.  He was Bob Neate and one of many to join the forces which would take most overseas during the conflict.

At the time Bob was a footballer with a suburban side, not particularly talented, but a real goer on the wing.  He weighed in just over 10 stone (70kg) and following enlistment, was sent to Sydney for training.  Most infantry training in those days was undertaken at Ingleburn.

Being a footy fanatic he went to his first game in Sydney at Trumper Park and asked for a game.  He signed with the Sydney Club, which later changed its name to Sydney Naval.  Fortunately for Bob he was posted closer to the city to undertake a course and was housed under the grandstand at Randwick Racecourse for a month or two.  This gave him easy access to the Paddington ground for training and playing.

Later however Neate was tansferred to a camp about 7km outside Bathurst which curtailed his sporting activities.  He began to play inter unit football but yearned to get back to Sydney to play for Sydney Naval.

He spoke to some club officials who said they would pay his return train fare of 19/11 (nineteen shillings and eleven pence – $2) if he could travel down from Bathurst to play.

Bob had to clear it with his commanding officer who said he would have to finish his duties on Friday afternoon and be back in camp by 8:00am on the Sunday following Saturday games and 8:00am on Mondays if the team played on Sundays.  If however, if he was was rostered for guard duty, he would have to remain in camp.

The soldiers’ accommodation at the Bathurst camp is described here:

So in the freezing cold Bob hitched a ride in an army truck from the camp to the railway station where he caught the 11:00pm train for Sydney arriving at 6:00am.  When the games were over Bob was straight down to Central where he caught the last mail train back to Bathurst arriving in the worst of the weather.  Fortunately there was always an army truck at the station which gave him a lift back, in the rear of the uncovered vehicle.

He had an aunt and uncle in North Sydney so would catch a further train over the bridge and have breakfast with them then find his way to one of the grounds, which in those days mainly consisted of Erskineville Oval and Trumper Park with Trumper Park again used of a Sunday where games attracted huge crowds.

He played in the club’s historic 1944 Grand Final win at Erskineville Oval when the team came from fourth place to steal the flag.  They won the 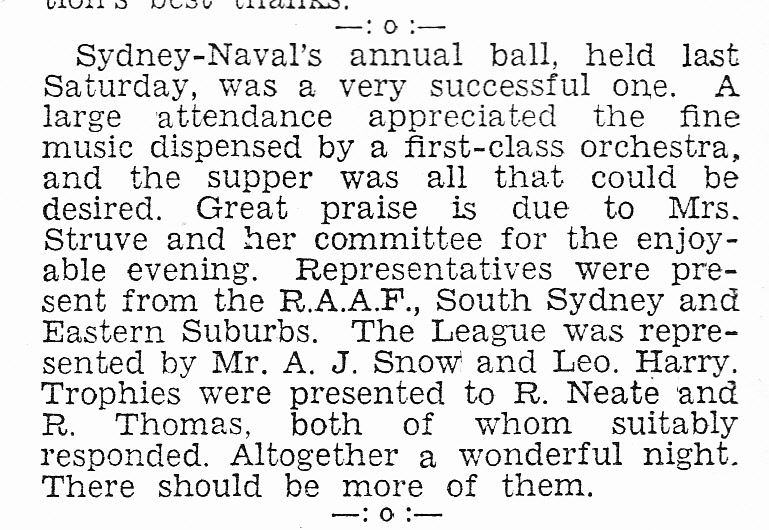 first semi by a point over St George then in the preliminary it was a 17 year old naval rating, Jack Sheedy, who was the hero in the mud when he marked a greasy ball on the forward flank in the dying minutes of the game.  No-one gave him any chance but the very talented Western Australian who in 2001 was inducted into the AFL’s Hall of Fame, booted a goal with metres to clear to give his side a three point win and straight into the grand final.

Neate eventually did serve overseas but not before he won Sydney Naval’s 1944 Best & Fairest.  We have attached a copy from the Sydney Football Record of 23 September 1944 where it shows Neate’s achievement.

A 1.5 hour oral interview conducted with Bob in 2005 about his time in Sydney is available at the State Library of NSW.  It is soon to be digitised and available for the public.

Upon his return to civilian life, Bob was recruited to Hawthorn where he played one game for Hawthorn in 1946.

The attached photo shows the Sydney Naval side of 1945 taken at Trumper Park with Bob Neate second from the left in the front row.