I think this game would be one of a time, well certainly the result was.

In 1924 there were seven first grade teams in the Sydney Football competition.  This followed the loss of the Police team which had competed for the previous two seasons in the top grade.  However not all of the teams had reserve or second grade sides.

The senior teams were Newtown (2), Railway, North Sydney, Paddington (2), East Sydney, Sydney (2) and Balmain.  Those without (2) were the clubs without a seconds so other district clubs played before those particular senior games as curtain raisers.

In late July the South Broken Hill Club journeyed to Sydney to play a game against a combined metropolitan team, then called Metropolis.  The Sydney side contained thirteen of the twenty or so who were selected in the NSW State Team which went on to compete in the Australian Football Carnival in Tasmania in weeks following this encounter.  South Broken Hill won the match 9-8 (62) to 8-10 (58) before a crowd estimated at 6,000;  The Broken Hill team were described as “brilliant”.

No-one gave the seconds a chance but they easily got over their opponents 6-11 to 3-6.  The scores of the early games in those days were nearly always modest due to the  population’s working conditions of five and a half days a week which included Saturday Mornings; curtain raisers began at 1:30pm and were mostly played in four x 15 minute quarters.

It is worth reading a passage on the game from the leading sporting paper of the day, The Referee:

“BRAVO, THE JUNIORS !
The early game was between the team picked to play against Victoria, and Combined Reserve Grade. Nine of the representative teams failed to turn up and other players not picked, who were at the ground, filled the gaps. But the team which took the field was little inferior to the original selection; The dash of youth proved too good for the has-beens. In every phase of the game, in every position, even in the ruck, where they were expected to be weak, the juniors were markedly superior, and gave the seniors such a lesson in getting to the ball and doing something with it that the selectors must take note and strengthen the team to play against Victoria by the inclusion of some of the boys. The best football is in a youth when he is round about 19 and 20; if he does not show it then he never will. The selectors plea that the boys are too young and cannot stand the buffeting was shown to be mere moonshine. The juniors were never headed, and cleverly won an epoch making game, in which the scores were: First quarter. 2-5 to 1-3; half time, 5-7 to 2-4: third quarter, 5-10 to 8-4; final scores, 6-11 (47) to 3-6 (24). Goalkickers; Second Grade, Flynn (4), Holder (2) ; and Finch Rudolph and Powers for the Firsts. For the winners, every player was at his top, and Woolnough handled Ills side in masterly fashion. For the losers Finch, Eagle, McFarlane, Reynolds,”

Incidentally, on the same weekend, the North Broken Hill side defeated a combined Northern Tasmanian team at York Park, Launceston before 6,500 people, 8-6 (42) to 5-10 (40).

Given that we have the Hong Kong Dragons which commenced in 1990, the Beijing Bombers which were started in 2004 together with the Shanghai Tigers and a team in the Pokfulam district of Hong Kong that was kicking around in 2014 playing as the Pokfulam Vikings, we have found evidence of another game way back in 1940 before Japan entered the war.

The article, which was published in the May 18 edition of the Sydney Football Record begins with the line: “Some day Australia may be playing Test football against China?

It goes on to report:
“Australian Naval Reservists recently staged an exhibition match on the No. 3 football ground at Causeway Bay, Hong and greatly impressed local sports enthusiasts.

A description of the match was given more than half a column on the main sports page of the South China Morning Post which describes “spectacular high marking and extra ordinary long drop kicks and punts” as features of the Australian Code.

Apparently the paper’s special sports writer ‘Spectator’ was assigned to cover the match.  These are extracts from his story of it:

“The actual progress of play struck me as being twice as fast as the rugby union code, this was probably due to the fact that there are no scrums given for knock-ons or for forward passes.

High Marks Impress
Spectacular high marking was featured throughout and the ball did not have to be caught ‘dead’ for a mark to be given.  On several occasions the ball was taken 10 ten and eleven feet off the ground with several hands reaching up…..

“Given a big ground and normal conditions, the Australian Rules game should prove popular with football followers and it would not come as a surprise to see the Chinese adopt this game, which is a combination of football, rugby and basketball.

“Drop-kicking and punts, some of which were between 40-60 yards occurred at many stages and after the second quarter, players were scoring goals fairly regularly….

“The main scoring tactic is the high mark and spectacular and very accurate punting from player to player, each in turn marking.  This makes the pace very fast and the game thrilling.

“The ball is not allowed to be passed in the traditional rugby union manner, but is either fisted or struck with the palm.  Carrying the ball, as in the case of a football goalkeeper, is not allowed and the ball must be bounced every ten yards or so…..”

[Back to the Football Record text:] If a scratch game by Naval Reservists could make this impression, to what raptures would a Hong Kong Crowd be moved by such Victorian League stars as Ron Todd, Jack Regan, Jack Muller, Jack Dyer, Dick Harris, Bert Mills, Dinny Ryan, Sel Murray, Frank Gill, Ken Baxter, Roy Fountain and a dozen other such exponents, who we see every Saturday on the grounds every Saturday during the winter.”

The two opposing football bodies, the Australian Football Council, representing all states for the Australian game and the NSW Rugby League, again got together to discuss the formation of a game that would see an amalgamation of the two codes.  Well that was the thinking.

This time it was in 1933 and once more at a time when a national 10 day carnival was held in Sydney.

A preliminary meeting with representatives of both groups was appointed to establish some starting rules of the game and a secret match under those rules was played on the morning of Friday, 11 August at the RAS Showground, Moore Park (now FOX Studios).

Most of the players who took part in the encounter were members of the Queensland Australian Football team who were in Sydney for the carnival. Needing enough for two fourteen man teams, their number was supplemented by some local Rugby League players.  The trouble was that all players were not familiar with these new rules and the Queensland players, in particular, had played a tough match the day before against ˜Canberra.”

At a more formal meeting at Rugby League Headquarters held on the night of the game, 165 Phillip Street, Sydney,  Horrie Miller, Secretary of the NSW Rugby League gave a detailed report on the drafting of the rules, a brief description and a few of those rules, appears below:

It was suggested that the field of play would be divided up in a manner somewhat similar to the Rugby field with the exception that the goal posts be put on the (rugby) dead ball line and the touch-in-goal area in front of the goal posts instead of behind them.  In place of having a 25 yard line from the posts, it was set at 35 yards at each end.  In the central area it was proposed the Australian game should be played with the pass back and the tackle, there being no off-side in that area.  However, inside the 35 yard areas, the off-side rule would apply, as recognized by Rugby League.

The rules provided for fourteen aside, but only twelve aside were available, the Australian Rules men being mainly Queenslanders. The Rugby field was used and a 35 yards area at each end set aside in which offside, applied and not elsewhere. It was said there was a touch of soccer in the game. Tries and goals were the means of scoring.

There were many other rules to this new game but the one concerning the off-side rule, appeared to be a point of contention.

It would appear that Mr Miller was a leading proponent for the introduction of a new game and went to great lengths to get the two groups talking as well as making arrangements for the trial game.

Various speakers expressed the view that any amalgamation would have to be gradual and that if each code introduced features of the other, the game could be brought together in a few years.

Mr Miller made a very interesting point when he said “I may say that the idea in drawing up this code of rules was to make the play as open as possible.  We are giving what you Australian rule (sic) people are asking for and what the Australian public require, that is action.”

The meeting was chaired by Mr E H Tassie who was the South Australian Representative on the Council.

After listening to the speakers from the NSW Rugby League, he made the comment that  ‘his group’s sincerity over the matter (the amalgamated game) might have been questioned, but, as delegates on a trip to Sydney, our actions have been such as should stay any criticism in that respect.”

The delegates from both sides kept their comments to what we would describe these days, as “niceties”. 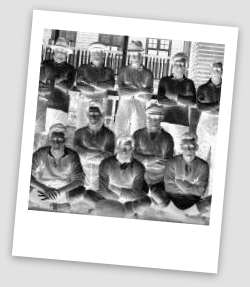 Eventually, the following motion was carried unanimously by the combined seventeen man delegates:

That the suggested rules drawn up by the sub-committee for that purpose, form the basis of a report back to the various clubs, and, if in their opinion, these bodies consider a further conference desirable, such conference be held.

One significant matter on both sides was the strong personalities “who would not have a brass tack of the other game. They think they have a good thing, and that if the other party wants to come into the fold he must do so and not expect any amalgamation. ‘Let the Rugby League take on our game,’ said an Australian Rules hard citizen. ‘Let the Victorians take on the Rugby League game. They would play it well,’ said a Sydney man.

The whole issue had its fate decided when the NSW Rugby League met on 14 August where the matter was discussed in detail.

Mr.S.G Ball proposed and Mr. J. Craig seconded that the report be received and no further action taken. He added that their own game at present needed all their care and attention.  This was carried, after debate, by 15 to 10.

It was doubted that the respective state leagues would have supported such an extraordinary change to the rules of their (Australian) game so the early decision of the Rugby League, in a way, put a dampener on any possibility of a future mission into changing rules or the combining of games and the issue having any caustic repercussions to the AFC delegates.

Locally, a later proposition was put whether a new game would have supplanted the Australian code on the one hand and Rugby League on the other, is quite another matter. It was thought old sympathies, ties, friendships, and traditions would probably, have held the present games intact.

We shall never know.