Extract from Episode 9 A Season in the Country: Across the Wheatbelt by Peter Clark published on the Footy Almanac website. 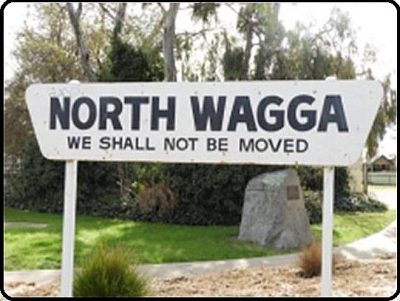 The residents of North Wagga know a thing or two about floods and how to endure the adversity wreaked by the rising waters of the Murrumbidgee River. That they occupy a floodplain is not disputed, but the right to determine their own destiny is something they guard very closely. Despite the best efforts of others to move them away from troubled waters to higher ground elsewhere, they have remained in steadfast resistance. They are a stubborn lot as the sign at the entrance to the village declares: “We shall not be moved”. And for well over 50 years of holding firm, they have not been moved on. Other strategies such as raising their houses above the floodwaters have been tried, but periodically the ‘Bidgee breaks its banks and threaten the levees constructed to hold the river back.

The floods of 1974 at North Wagga were disastrous. Many houses in North Wagga had over two metres of water pouring through them. The levees built after the floods of 1950s were designed to protect the Wagga CBD but not North Wagga properties, with their exclusion becoming a source of discontent and petitioning by residents for a permanent levee. But the “once in a generation” floods of 2012 proved an even greater test of the community’s resilience. The football ground was inundated and the dressing sheds destroyed, but the community rallied and repairs were made in time for the 2103 season.

So, you will sense that a strong, practical and resilient community surrounds McPherson Oval in North Wagga. Many of its folk are ‘battlers’ and that character is proudly reflected in the football club, the North Wagga Saints. North Wagga, under various names (Old Town, Stars, Saints, North Wagga-RAAF) have won eight premierships in their 135 year history.

The club nearly folded in 2007, choosing to go into recess for a year to rebuild its financial and playing stocks. With a talented crop of Under 18’s players the club could see a promising future, a vision that precipitated its move in 2008 from the Farrer League to the strong Riverina League. The realignment suited the Saints because the Riverina League had a strong Under 18’s competition. The club then successfully rebuilt from the grassroots. North Wagga rejoined the Farrer League in 2010, winning their eighth and most recent flag in 2019.

And in good times and bad, the residents and footballers have a choice of watering holes – ‘The Black Swan’ or the ‘Palm and Pawn.’

Henty made the first three quarters a struggle for the home team but eventually the floodgates opened. Five goals in the last 10 minutes of the final quarter gave North Wagga’s win a much more comfortable appearance on paper than the actual contest. Rover Ken Dash got the Saints going after the last change, while captain coach Alan Hayes showed both his brilliance and his resilience in shrugging off illness and a hamstring injury to lead his side to an impressive 52 point win.

Around the Farrer League grounds

The Rock-Yerong Creek had a percentage-boosting win over Culcairn, winning by 93 points. Wagga enjoyed a comfortable 48 point win over Temora. Mangoplah-Cookardinia United won an evenly balanced contest against Lockhart by 15 points. Holbrook raced out of the blocks with seven first quarter goals before coasting home to a 21 point win over Collingullie.

Queensland state representative Alan Hayes, from QAFL club Mayne, moved to Coolamon (South West District League) in 1969 and left an indelible mark on the history of Australian Football in the Riverina as a star player at three clubs and a successful coach. He was a dual Gammage Medal winner (1969 and 1970). The players he beat to win the league best and fairest award were strong contenders indeed- Ricky Quade and Frank Gumbleton (1969) and Doug Priest (1970). Hayes transferred to North Wagga in 1972 and led the Saints to a drought breaking Farrer League premiership in just his second season as captain coach of the club.

Hayes was a versatile key position player who could hold down the centre half back and centre half forward positions with equal aplomb. He was a spectator’s delight with his trademark long kicking, high marking and balance on the run. ‘Hazy’ was known to set very high standards and take great attention to detail in his preparation, always wanting to perform at his best.

Alan Hayes coached the Farrer League and was the NSW vice captain in 1975. He later coached Turvey Park to the 1977 SWDFL premiership. His brother Jim, also from the Mayne Tigers, coached the Coolamon premiership side in 1970. A third brother, Ken, was attracted to the Riverina football scene where his brothers had established strong reputations. Ken came to Coolamon from the Mayne Tigers in the mid 1970s and later coached the Hoppers.