Ever wondered why Australian Football gives one point for a behind (why the term behind???) or six points for a goal?

After hearing a Sydney ABC radio presenter making some disparaging remark about the scoring in Australian Football recently, I thought it was time we explored the reason why and the answers to other puzzling questions in the rules of our game.

In 1897 the VFL was established, breaking away from the VFA (Victorian Football Assocaition) which had been the governing body of the game in Victoria, and probably the nation, since their formation in 1877.

Why did they break away?  Well this takes further investigation.  Obviously the initial VFL clubs: Melbourne, Essendon, Collingwood, Fitzroy, South Melbourne, Geelong, St. Kilda, and Carlton were disenchanted with the VFA.  Why?

When a break-away like this occurs, and there have been many over the years not only in sport but in other institutions, people tend to jump on the band wagon; but the proof of the pudding is in the eating: what happens in five years time?

A very interesting aside in the formation of the VFL was a motion carried prior to the start of the 1897 season: “Any player who has played during season 1896 or plays during season 1897 with any of the clubs at present known as Footscray, North Melbourne, Port Melbourne, Richmond, or Williamstown (all VFA clubs) shall not be allowed to play during season 1897 with any of the dubs represented on the league.”  That would have kept VFA players with their clubs and not drained the Association of participating personnel.

Fortunately the Victorian Football League and their clubs were controlled by smart people, unlike some other codes, and the fact their grounds could charge an admission fee meant it was “smart people with money”.

This is moving away from why one point for a behind etc.

Prior to 1897 a goal was worth one point although behinds were noted in the score – noted, not counted.

So this one point business produced many draws.  This might be OK in other football codes but those Australian Football administrators of the time said, “enough is enough”. 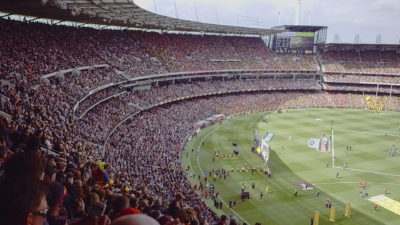 To stop so many draws they altered to rules to provide one point for a behind and six points for a goal.  Why those numbers?  I am yet to find the reason.

Why the term ‘behind’?

In the days before 1897 (Australian Football [let’s call it that], evolved from ‘Victorian Football’ which initially went by the rules of the Melbourne Football Club; these rules were codified in 1859 making it the oldest codified game of ‘football’ in the world – true)

Australian Football was played very much along the lines of Rugby: Two sides lined up against each other, a kick off started the game, it was played on a rectangular field etc.

The idea was to get the ball somehow over the line.  If it got between the goal posts in whatever way, viola – a score, but if not the ball was termed as “going behind”.  This was certainly the case with rugby who subsequently changed their scoring method and terminology very early on.

Australian Football however, kept the term “behind” and so when the scoring method changed, that term was retained and has lived with us ever since.

“What a great game we have”