On the biggest stage in the big games, NSW full-forward Stan “Powder” Powditch stepped up to boot the goals the Light Blues needed to take it up to rivals from the other States.

At the 1933 ANFC Carnival at the SCG, he came into the team after the loss to Victoria in round one, to boot 11 goals in a convincing 85-point defeat of Queensland. He subsequently kicked 5 goals in the win over Canberra, 6 goals in the victory over Tasmania, and 5 goals in the narrow 10-point loss to WA.

Powditch was only trumped as the leading goalkicker for the championships by Victoria’s Gordon Coventry, the champion Collingwood VFL full forward, who booted 12 goals in the Vic’s 60-point demolition of Tasmania to win the title with 30 majors.

While Coventry scored his goals in five matches, Powditch kicked 27 goals in his four games.

Both forwards finished well ahead of two of the greatest full-forwards of all time, Victoria’s Bob Pratt (South Melbourne) and South Australia’s greatest goal-scorer Ken Farmer (North Adelaide), who both only scored 12 goals each at the 1933 Carnival.

“Powder” was an athletic 6’ (180cm) tall 13 stone (81.5kg) forward; he had huge hands described as “glue-fingered” by the contemporary press that enabled him to “clunk” marks. A hallmark of his goal-kicking was his unerring accuracy; he kicked 27 goals 5 behinds in the 1933 Carnival and 7.1 in the win over Queensland in 1940 at SCG No 2.

His overall goalkicking record set out below reveals his career average was remarkably above 4 at both club and interstate level:

Powditch grew up and learnt to play football in Sydney. His father, Charles, was a foundation player and official at Newtown FC when the competition in Sydney re-commenced in 1903.

He first played football at the Gardener’s Road Public School at Mascot after the family moved to the area. This was a rich nursery for the South Sydney Club, one that also produced Jimmy Stiff, who was voted the best player at the 1933 Carnival.  Powditch then played with Metropolitan Football Assn senior team, Rosebery (pictured) at age17,

Making his senior debut for Souths in the first game of the 1929 season against Sydney, he kicked six goals from full-forward and went onto to boot 56 goals for the season. He finished third in the goalkicking award behind Newtown’s star forward Lionel Hastie (also from Gardener’s Rd school and a future Fitzroy FC player) with 64 and Eastern Suburbs goal-kicking machine Stan Milton on 59.

He kept in an exercise book details about his career including every game played, opponents, results, goals and behinds kicked, with annotations.

Powditch broke through for his first competition leading goal-kicking award in 1932 with 59 goals even though he played eleven matches at centre half-forward. Stan Milton finished 2nd with 55 goals.

For the 1933 Carnival in Sydney Powditch was preferred as full-forward to Stan Milton. Milton had been a fixture as full forward for NSW for 29 matches including the win over Victoria in 1923. He kicked over 1200 goals in a career spanning from 1919-38.

In a controversial move prior to the commencement of the 1934 season, Powditch requested a transfer from South Sydney to St George.  We believe this occurred mainly because of a change of residence to Brighton-le-Sands, following his marriage to Bessie Sinclair.

Souths refused to clear him so he went and played first-grade soccer with senior Sydney Soccer team, Metters. In an ironic twist to his position in football as a goal-scorer; in soccer, he played as the goal-keeper! He’d had never played soccer before.

Eventually, the impasse was sorted out after several appeals and he was cleared to St George but suspended for twelve weeks on a technicality for not declaring a change of residence.

Nonetheless, Powdictch was selected in the State team as full-forward in 1934 and kicked three goals in the comfortable 34-point win over Queensland at the SCG on 18 August.

He subsequently carved out a stellar career as a key forward for St George and played a key role in the club’s success in this period, winning premierships in 1937 and 1938 and runner-up in 1935 and 1939, and a further premiership in 1943 that Powditch missed through injury.

In 1935 he topped the league goalkicking for the second time with 80 goals (49 behinds) including six in the grand final Powditch’s notes reveal that he never missed a game (18) and never missed training (52).

1937 proved to be Powditch’s best season in the local football competition, and St George broke through for its first-ever premiership when it convincingly beat South Sydney in the grand final, 11.16.82 to 6.9.45.

“Powder” booted his first century of goals, 114 (and only 38 behinds), to top the league goalkicking. He played in seventeen matches averaging 6.7 goals per game. This included bags of 12 against North Shore, 10 against Eastern Suburbs, and 9 goals against Easts, Sydney, Norths (twice) and 10 against Souths in the major semi-final win.

Powditch won the competition goalkicking award for the fourth time in 1939 with 89 goals including two hauls of 12 goals (and no behinds) against North Shore and Newtown. He bagged five goals in the grand final but Newtown proved too strong and won by 22 points.

He didn’t play in 1941-42, but returned to play for St George in 1943 with champion Collingwood ruckman  Phonse Kyne as captain.  However, he developed knee trouble and it finally gave way on him in the final round match against top team RAAF. It was to be his last ever game. He still kicked 67 goals in fifteen matches for the season.

St George beat the strong RAAF team in the major semi-final and then beat South Sydney in the grand final – without their star forward. 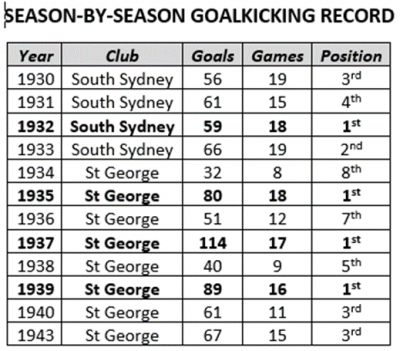 Acknowledgements: Warwick Powditch and family for the donation to the Society of all of Stan Powdich’s football records including photos, match programs, newspaper clippings, and personal reminiscences.