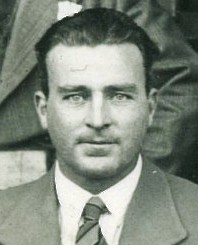 Frank Dixon NSWAFL Vice President, State CoachFrank first began playing football with a junior club, the Daceyville Waratahs in about 1926 and was later called up to the South Sydney Club where he went on to play over 150 first grade games.

He was a natural born leader and extremely popular figure in the league. He captained and coached South Sydney between 1934-39, taking the side to premierships in 1934 & 35 and runner up in 1936 & 37. He represented NSW on 9 occasions and state captain from 1935-37. Wounded in the war he turned to coaching the NSW between1947-52 he was appointed coach NSW State Team. Frank later entered local politics where he became Deputy Lord Mayor of Sydney between 1960-62 with the then newly constructed grandstand at Trumper Park, Paddington named after him in recognition of his services to the game.  He was captain,  player then captain and coach of South Sydney Football Club ”

interviewed by Ian Granland, President of the Society

How about this one?

We have taken the following from a report on the match and repaired some mistakes we found, but not all.

B. Lindengreen broke his leg a few days prior to the start of the Carnival, so the Broken Hill contingent included B. Stenhouse in their squad. Owing to injuries, Stenhouse was only used in the final game.

Injuries and illness made things extremely difficult for the coach to select a team. On the day the team assembled, the group had a case of food poisoning, glandular fever, a broken leg and a wrist taken out of plaster after a break, so we were extremely lucky to have a team.

The Carnival’s Best & Fairest Award, the Arthur Bridgewater Trophy was won by Glen Sheppard of Tasmania.

N.S.W won two games and lost one with a percentage of 144.44, finishing on top of the table over Tasmania, Queensland and the ACT.