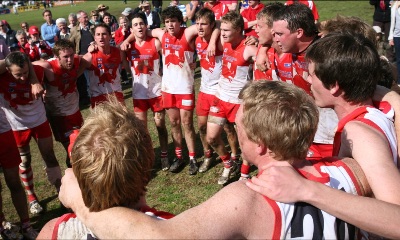 University football clubs differ from other footy clubs. And the club from the Charles Sturt University in Wagga, the mighty Bushpigs, is different again.

Every university football club around Australia goes through an annual process of renewal when a welter of teenaged students signs up during O-Week. This process is a source of wonder and delight. The sense that a talented student might emerge from a dormitory room to kick 100 goals is a sense that never quite leaves university footballers. The optimism of youth is carried through future endeavours like a ball tucked under the arm.

Without the cautionary presence of their parents and grandparents at a university club, the young players go a bit silly. University students are creative types, with lots of bright ideas. The atmosphere at university clubs tends to verge on mayhem. Sometimes it tips over. The Bushpigs have tended to treat away games, the chance to get out of town, like weird and wonderful adventures. Pubs throughout the Riverina, from Ardlethan to Bethungra, experience a surge of sentiment and song while the Bushpigs stop over for an hour during their journey back to Wagga.

The Bushpigs are like university clubs in cities and towns around Australia, with teenagers on the committee and an inventive approach to life and the drop punt. But the club does have a distinctive twist. The Bushpigs are based in the country where Australian rules football and the rugby codes have always duelled for the hearts and minds of local fans. This battle of the codes has given the Bushpigs an added sense of purpose. It is unlikely that a club that was founded on a campus with only 700 students could have achieved such longevity if not for its location in the border lands of the Code War.

Peter Ponting, the Bushpigs’ first premiership coach, was born in to a rugby league family in Cootamundra. He was saved, however, from the threat of rectangular perils when his family moved to Melbourne. As a young boy, Peter went to Essendon Primary School, which is tucked behind the eastern goals at Essendon’s traditional home ground, Windy Hill. When he left high school, Peter headed across the country and settled in Geraldton, on the West Australian coast. He played for a season with the Towns footy club.

Ponting was 20 years of age when he headed back across the country to see his mother, who was now settled in Wagga. He got a job and he, too, stayed in the regional city. He signed on to play with North Wagga, where he became well-known for his tough and resolute style at half-back.

In 1972, Ponting was a carpenter when he took a job on the maintenance staff at the Riverina College of Advanced Education. He played in North Wagga’s premiership team in the Farrer league in 1973 before heeding the call of his colleagues and becoming an assistant coach at the college’s football club.

In 1977, Ponting was an assistant coach at Junee. At the end of the season, he returned to the college’s football club to assume the role of playing-coach.

Early in the 1978 season, Ponting found that the students were unsure of themselves when pitted against truck drivers with big arms and farmers with gnarled hands. With his determined displays at half-back, Ponting led by example. He despaired, however, about the students’ resolve.

When many students returned home to the far corners of the Riverina during the term break, the club was left in its annual predicament of finding enough players to field two teams. Club officials pleaded with students from all over the campus to take up footy for one match. According to a report in the club’s early history, Pig Tales Vol I, soccer players were common targets for recruiters, while a table-tennis player once agreed to pull on the boots after hearing the code referred to as aerial ping-pong.

In 1978, Peter Ponting pulled off a heist when he persuaded a physical education lecturer, Bruce Graham, who happened to be a representative basketballer, to fill in for one match for the Bushpigs. Graham adapted so well that he agreed to play out the season. Although the turn of events was unlikely, it was just the type of thing to happen at a university footy club.

The matter of raising club morale at the student club in Wagga was taken up by Phil “Growler” Jackson, an education student from Leeton, who shared the ruck work with Neil Dal Nevo. Away from the books, Growler Jackson was an avid hunter of wild pigs in the scrublands of the Western Riverina. When, with impressive forthrightness, he suggested that the club should adopt the nickname of the Bushpigs, he scared a lot of people. But he gathered enough support to get the idea through.

The distinctive nature of the nickname was part of its appeal; it chimed in perfectly with the inventive nature of a student club. But the nickname also had a certain resonance because of the presence of pigs on the western plains.

Peter Ponting says the adoption of the nickname was a turning point in the club’s fortunes. For student footballers with long hair and corduroy flairs, who had struggled to carve a niche against their short-haired opponents, the nickname had a galvanising effect. It generated momentum. Under the banner of the Bushpigs, the student footballers found themselves.

Despite the rising club’s improving fortunes late in the 1978 season, the local sports writer Ross Ingram voiced an unpopular opinion to anyone who would listen during an evening of drinks at the Rules Club in Wagga. Ingram, a mainstay at the Wagga Daily Advertiser, who was prone to exhibiting the scepticism of his trade, told the Bushpigs players that a bunch of students would never, ever win the Central Riverina league’s premiership. Peter Ponting, the most senior and sensible Bushpig, took the journalist to task. Ingram scrawled on the back of a beer coaster a pledge to provide an 18-gallon keg of beer for the Bushpigs’ celebrations if they did manage to hoist the premiership cup.

As the Bushpigs players were about to jog out of the rooms before the 1978 First Semi-final against Cootamundra at Barellan, one of the players began singing the club’s newly penned song. Teammates joined in with boisterous outpourings of the response — “Root, root, root” — at the end of the second line. Ted Ryder, the sports editor of the Wagga Daily Advertiser, was at the game. He later wrote that he had never heard a club song bawled out with such feeling. Peter Ponting says the hairs on the back of his neck were standing up. His student footballers now truly believed in themselves. The Bushpigs rolled past their fancied rivals.

As the 1978 finals series rolled on, Ponting and his wife Betty knew that the culinary habits of the students were unlikely to provide the necessary fuel for the rigours of finals football. To ensure that his players were properly nourished, Ponting invited the players to his home in Truman Avenue, Wagga, for a cooked breakfast on the morning of every finals match.

Peter and Betty Ponting, aware of the long pockets of lanky students, paid for the breakfast themselves. They served steak and onions and eggs. Many players, a long way from home during one of the most important months of their young lives, looked up to their host couple, neither of whom was yet to reach 30 years of age. The students especially loved the couple’s dog, Mac, a golden Labrador who performed an array of tricks on demand. The students occasionally stole Mac to show off to their friends in the student union.

Before the 1978 Grand Final, Ponting gave Bruce Graham, his basketball recruit, the job of shadowing Barellan’s crack centre half-forward. As the match progressed, Graham grew into his role. In the second half, he began to find the ball himself. Having barely played footy just a couple of months previously, Graham was named best on ground for his performance in the Grand Final.

Such a rapid rise in fortunes reflected the sports union’s credo of offering a range of opportunities for those on campus. At such a young age, students were willing to explore those opportunities. The Bushpigs sang their song to the skies.

Four days after the match, the Bushpigs players gathered in Trail Street, Wagga, under the window of the Daily Advertiser, and chanted the name of Ross Ingram, the wilful gambler from the sports desk. The footballers wanted their beer. Ingram duly obliged. The student footballers drained their keg during a joyous afternoon of pomp and piggery.

Source: Paul Daffey;  and we acknowledge Paul’s work and contribution.