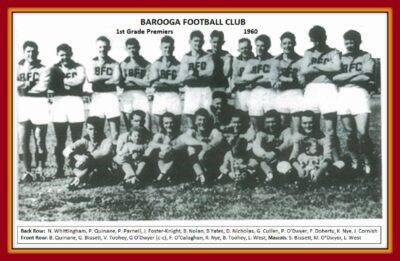 It’s a late afternoon as the sun sets down on the Murray River when 91-year-old Gerald O’Dwyer comes in from his vegetable garden at his home in Barooga to chat to me on the phone about the local club’s 1960 premiership triumph in the Picola & District Football League.

“I couldn’t make the committee meeting because I was watering at the time. I got appointed honorary coach, that meant no money for doing the job!” Gerald told me.

“It was between me and Vin Toohey, who was a marvellous player, but the committee chose me because I was older”.

It was an inspired choice by the Barooga footy club because Gerard would lead the team to a premiership and Vin Toohey would win the competition best and fairest. They were the two best – and hardest players in the competition.

The names O’Dwyer and Toohey are inextricably linked to Barooga even though the sons of Gerald and Vince would make their mark elsewhere with Jon (Swans list), Chris (Swans), and Kieran O’Dwyer (Hawthorn list) and the Toohey brothers, Bernard (Geelong, Swans & Footscray), Gerard (Geelong) and Stephen (Geelong Under 19s).

However, the eldest boys, “Jon O” Dwyer and “Huck” Toohey would return home for premierships. More about the sons of guns later.

Barooga is a border town (pop. 1817) on the NSW side of the river just 10kms from Cobram. It shares the same postcode as Cobram, 3644. I dialled 03 then the home number to talk to Gerald. Everything visual is Victorian except the number plates.

The Barooga Football Club was formed in 1894 and with Tocumwal, Yarroweyah and Muckatah formed the Murray Border Football Association.

Gerald O’Dwyer went to boarding school at St Gregory’s Campelltown and didn’t play football and until he returned home to work on the family farm at end of WWII.

Together with his brother-in-law and close friend Vin Toohey he joined the Barooga team then playing in Murray League 2nds competition against Jerilderie and seconds teams from most of the MFL clubs such as Finley, Berrigan, Cobram, Deniliquin and Tocumwal winning premierships in 1950, 1952-53 and 1956.

In 1959 when the Murray League decided to consolidate the Seconds competition by adding Nathalia and Numurkah (from the Picola league), Barooga joined the nearby Picola & District Football League and Jerilderie went to the Coreen & District FL.

Barooga won the premiership in their first season by beating Wunghnu in the grand final at Picola under Don Holbrook. Then Gerald O’Dwyer took over taking the club to premierships in 1960 over Katunga and again in 1961 against Wunghnu.

In the 1960 Katunga (“sons of soldier settlers”) threw everything at Barooga and were in front by 15 points at ¾ time, Gerald went forward from his usual position in the centre and kicked two goals to propel them to victory.

When I asked Gerald about the high preponderance of Catholics in the team, he simply replied, “We were all in it together, we were nearly all farmers or worked on farms, good mates on the field, and off the field, we all enjoyed a barrel in the rooms after a game and then a drink down the pub, not all of us made it along to Mass on a Sunday”.

Gerald played 325 games for his beloved Barooga including seven premierships.

His eldest son, Bernard, has vivid memories of one match his father played when he was “cleaned-up” by a Yarroweyah player which broke a bone in his father’s neck. The ambulance was called but his father was reluctant to go off and wanted to keep playing “…besides I’ve got to get home to milk the cows”.

He played again three weeks later but could never look too far to his left again. Tough Toohey, that was another nickname, Bernard had at the Swans. Like father, like son.

After a highly distinguished VFL/AFL career Bernard had three years with Wodonga in the O & M but came home at his father’s urging and played in the club’s 1997 premiership in the Murray League at full forward and kicked 70-odd goals for the season.

Jon O’Dwyer, whose outstanding football ability and renowned ferocity at the ball took him from Assumption College Kilmore (ACK) to the Swans and a football odyssey in NSW also returned home to Barooga to play in the 1993 and 1994 premierships.

“Jono” has played in an unfeasible number of premierships/championships numbering 18 out of twenty including junior flags at Barooga and school titles at ACK; he also played in senior premierships at Sydney Uni (1992), Barooga (1993-94), Queanbeyan (1998-99) and Griffith (2003) then finished his career off with two reserves premierships for Barooga. He now assists with the GWS Giants Academy at Tocumwal.

Meanwhile, “Chris O” played eight senior games for the Sydney Swans 1990-1992 before joining East Sydney where he played 168 games between 1993 and 2000. He won the Phelan Medal (Sydney competition’s B & F) in 1994 and coached Easts in 1997-98. He currently coaches Ingleburn junior teams in the Sydney Harbour competition which feature the next line of footballing O’Dwyers, Finn, Angus, Sullivan, and Lennix that are sure to make their grandfather proud.