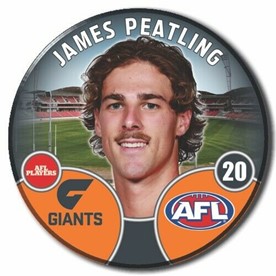 James Peatling, or “JP” as he is known to his team-mates, had a break-out game for the GWS Giants in their 52-point thrashing of the West Coast Eagles in their round 10 clash at Giants Stadium in Sydney last Sunday.

Peatling came back into the Giants team under care-taker coach Mark McVeigh and repaid the coach’s faith in him with a commanding performance in the forward line and on the ball.

He was pick 8 in last season’s mid-season draft after previously playing for the Giants NEAFL team.

Originally a Westbrook junior (Sydney north-west), Peatling went to Pennant Hills in 2015 at age 15 to play in the Under 19s, then making his senior debut in 2017 and playing in the grand final win over Sydney University.

Peatling was picked up by Sydney Uni for its NEAFL side in 2020 on the recommendation of the club’s then Football Director Wayne Campbell, who had been highly impressed by him when he conducted the GWS football program. He returned to Pennant Hills last season.

Callum Mills retains the lead in the Carey Bunton medal with 41 votes from Gold Coast co-captain Jarrod Witts, who also failed to poll votes this round, on 24.