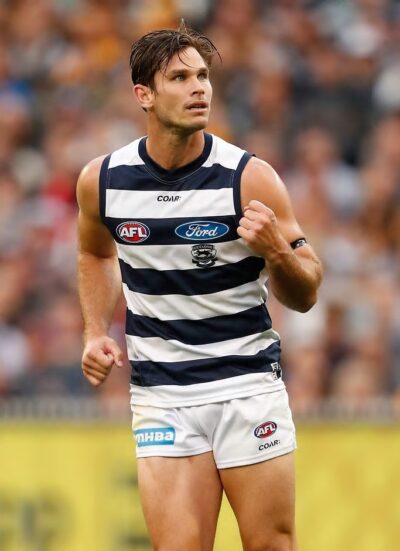 Geelong spearhead Tom Hawkins has propelled into contention for the Carey-Bunton Medal for the Best NSW Player in the AFL in 2020 by scoring 15 votes in the past two games.

The Big Cat scored the perfect 10 for his six- goal haul against Port Adelaide at Metricon Stadium and 5 votes when he booted five goals in Geelong’s win over St Kilda at the Gabba.

Hawkins now has a career total of 584 goals since joining Geelong from Murray Football League club Finley in 2007 via Melbourne Grammar.

Gold Coast skipper Jarrod Witts still retains the lead by four votes but he is being challenged by Hawkins and also Sydney Swans star defender Dean Rampe who received four votes for his outstanding game in defence against the GWS Giants.

Votes scored by Melbourne’s small forward Charlie Spargo (Albury) and Nick Blakey (UNSW-Eastern Suburbs) of the Sydney Swans brings the number of NSW players to receive votes in the award this season to twenty.